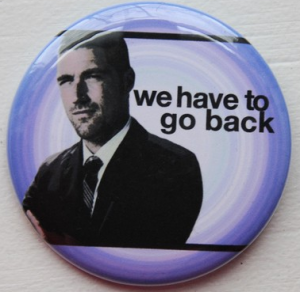 So, I’m having a LOST revelation. More like a coming-to-terms. I had hoped our flash-sideways were untrue. I was hoping for love and contentment and redemption ON The Island. I see that is not going to happen. I think The Island is broken. It’s puppet masters may be everlasting but they certainly are not omnipotent. The interesting connections between characters we had in previous seasons’ flashbacks always made us feel that “destiny” was at work. That they were all “meant” to be on The Island. But what if we’ve got it backwards? What if this “GOOD” LA flash-sideways is the REAL way it was supposed to be? And what if Jacob and his Nemesis messed it up? So, everything we’ve loved about The Island connections and character development were really just the working out of “destiny” trying to fix what Jacob, et al did with their pettiness? Maybe the good I saw on The Island (which therefore made me NOT want them to get off The Island) was really just a glimpse of the GOOD that was SUPPOSED to be? Did that make sense? Probably not. The point is, I’m trying to like the flash-sideways. I’m trying to see that GOOD has happened to our beloved characters OUTSIDE of The Island and the horribleness of their pre-Island lives was really BECAUSE OF The Island. Is that crazy talk? …read more