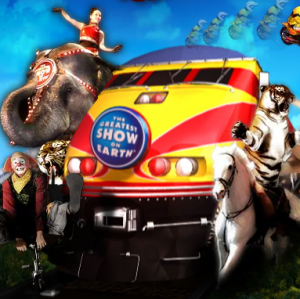 Did you hear about the Ringling Brothers Circus zebra that took a walk down the streets of downtown Atlanta yesterday? No, that wasn’t a lead in to a joke. Apparently he escaped from the circus and the police had to chase him down! Wouldn’t you have loved to be the one who called that in?

We actually got to see that zebra when we went to the Ringling Bros’ Zing Zang Zoom show in Atlanta last Saturday with Mandi and her family (read her circus recap to see a good pic!). We ended up having complete nosebleed seats (really we were in Row J on the 3rd level) but even still we could see everything—including the holding area for when the animals were about to come on stage. Our kids would see the animals and start pointing and shouting (or signing in Asa’s case) “ELEPHANT! ELEPHANT! LOOK, MOMMY! ZEEEBRAS!”

The animals (including the zebras) were definitely a high point for the kids (and for me, too!) The elephants are majestic, the zebras are breathtaking (how creative is God on that one?!), the dogs were hilarious and the tigers were frightening and beautiful at the same time! I have to admit (especially after seeing the zebra run down the highway) that zebras aren’t the smartest animals in the circus. Apparently zebras are un-tamable. So anything the trainers can make them do is a miracle. The rest of the animals were jumping over hurdles, standing on their heads and growling on demand at their trainers. The zebras were just running in a circle. But hey–it was still entertaining!

This menagerie isn’t even including the women getting shot out of a cannon, the acrobats, the hanging-upside-down couple, the magicians AND the clowns! The circus has come a long way, baby. If you haven’t been you should definitely check out Ringling Bros circus website and see when they are coming to your town.

They will only be in Atlanta for THREE MORE DAYS! So, that was really the whole point of this post (I kinda got carried away by the zebra)…I’ve got a coupon code for Zing Zang Zoom: use MOM to get $44 for a 4 pack of tickets Monday through Friday or $4 off Friday night & Weekend shows! It was well worth it—even with the zebras!