You are here: Home / Kids Crafts / How To Make a Rod & Stick Puppet 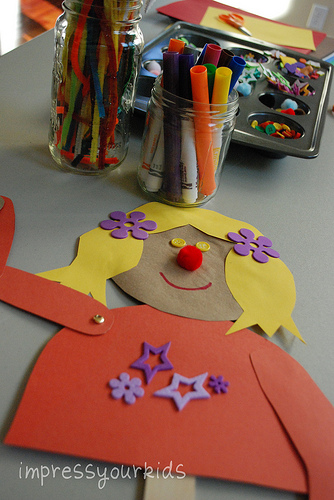 Lydia’s 4th birthday was last week. My husband took most of the day off so we celebrated by goign to the Center for Puppetry Arts in Atlanta. (If you live in Atlanta, you must be a fan of theirs on facebook. They run deals every once in awhile–so for Lydia’s birthday we got in for $5 instead of $16!!)

The puppets turned out so cute, I thought I’d do a more detailed description here! These would be perfect for any occasion–you can decorate them to look like anything or anyone! Plus your kids will play with this puppet forever! 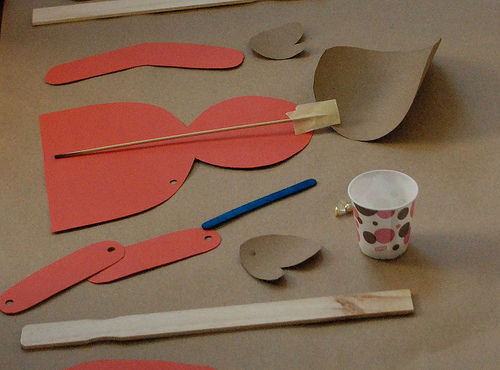 I cut the body out of posterboard. This is much better than construction paper because it’s more sturdy.

Then two arms: one solid and one in two sections. The sectioned arms should have holes punched in each end. Then once you attach them to the puppet’s shoulder with brads, you’ll have a moving arm!

We cut out the head and hands from brown paper but any material would do. I think adding the brown face and hands makes it more fun to decorate—and adds some contrast to the body.

We used all kinds of things to decorate the puppet—craft foam, pom-poms, buttons and wiggly eyes.

But the best part was the hair. I cut out pigtails for mine from construction paper. Then, once my artistic brother got to the party, he cut out little “wigs” for all the puppets. He just folded the paper in half and cut out a nice braid shape. Unfold and voila–instant puppet hair! 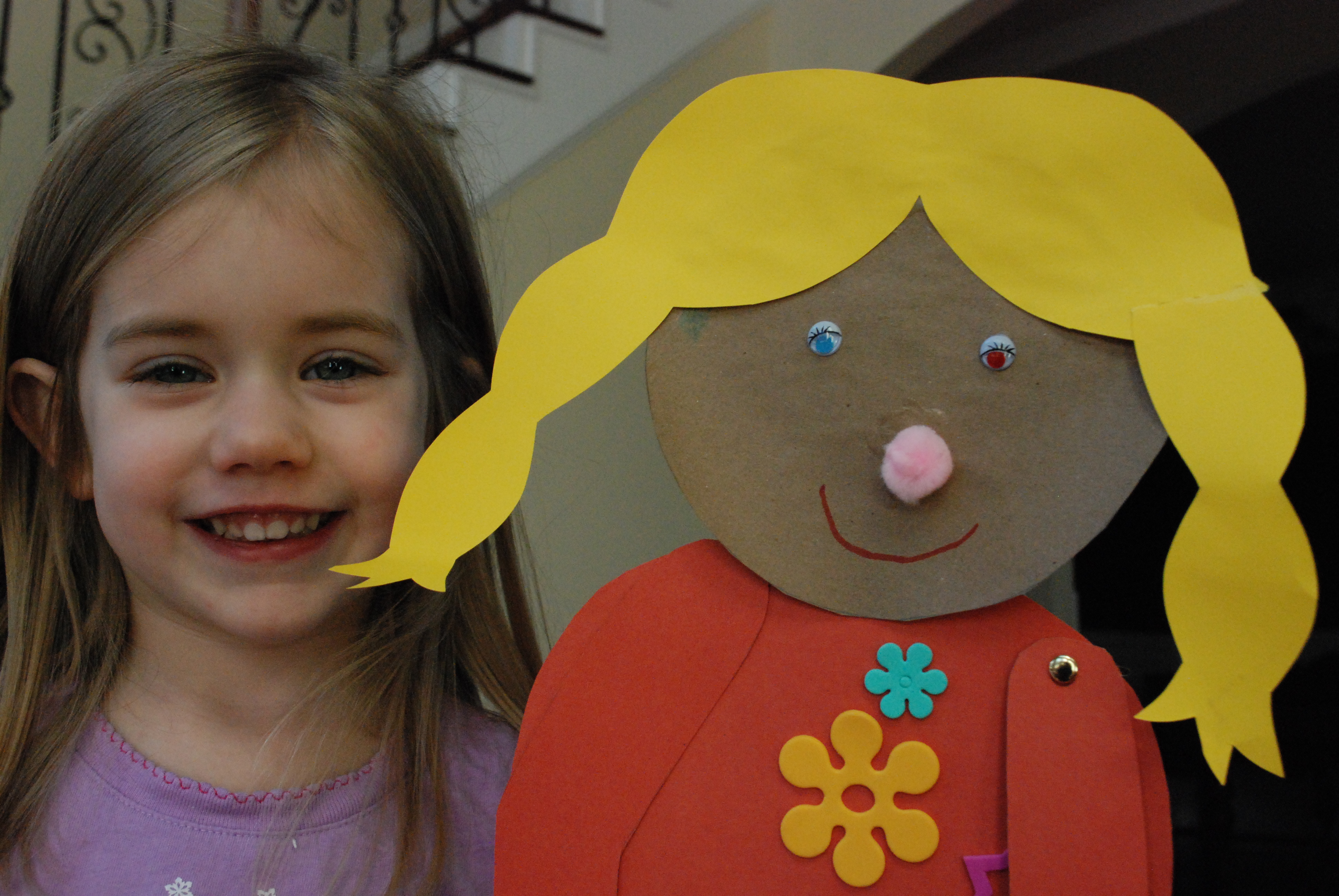 Grab a paint stick for the back (glue and tape works best) and then attach another stick to the moving hand. I used a skewer with a piece of making tape on top to protect the kids from the point. 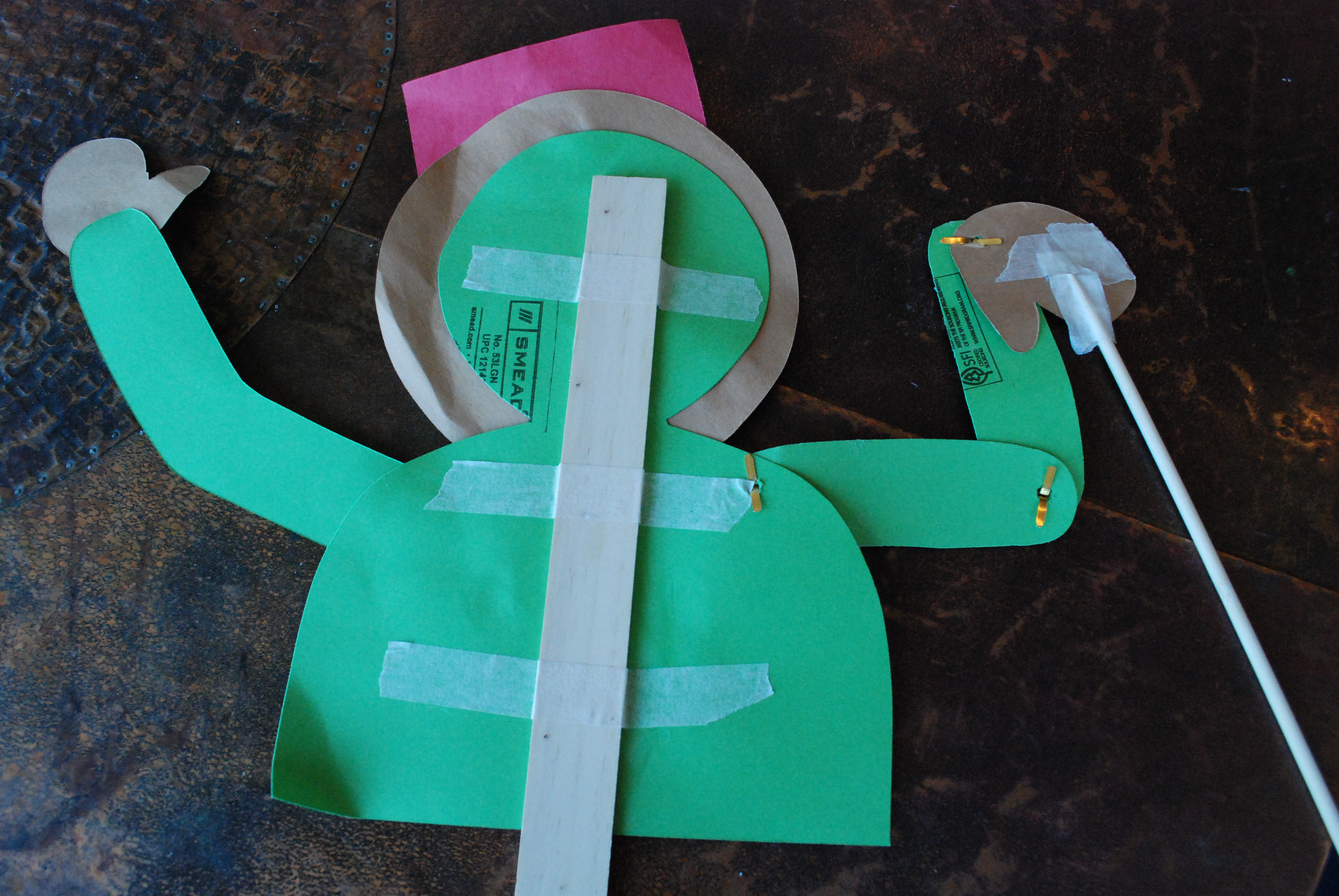 Lydia has been playing with her puppet all week–with or without a puppet stage!