You are here: Home / christmas / Making Room For Santa: Guest Post by Brandi at Will Blog For Shoes 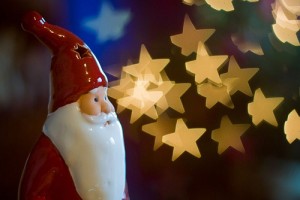 I promised more Santa posts and here is a beautiful post by one of my best blogging buds, Brandi! She is a a mom to 2 a sometimes blogger at Will Blog for Shoes and one of the funniest people I know! Here is her view of Santa and how they incorporate him into their Christmas traditions! Please show her lots of love by leaving a comment!

Saturday morning, I snuggled into bed with my three year-old to watch a movie.  It was a Christmas movie, so I took the opportunity to ask him, “What is Christmas about?”  His response:  “Santa Cwaus!”

Yikes!  Had I been wrong to sit him in the lap of the jolly old elf every Christmas since he was six months old?  To start two months out using “the naughty list” as my sole crutch for bribing good behavior out of my son?  Ok, the latter really isn’t earning me Mommy of the Year, but desperate times… you know?

If you asked me to sit down and convince someone to incorporate Santa Claus into their Christmas, I wouldn’t.  To be honest, I couldn’t.  Every single time I read someone’s blog post on why they choose not to introduce the concept of Santa to their children, I totally get it.  You see, I’m a Christian.  I believe with all of my heart in the virgin birth.  I get really steamed when I hear a story of one more christian symbol being removed from some public Christmas display.  I want my children to know about Mary and Joseph, about the shepherds, the wise men, the star.  I want Christ at the very center of their holiday.

For me, the notion of a man in a red suit delivering presents to excited children while they sleep doesn’t negate any of that.  To me, Santa epitomizes the spirit of Christ — a lifetime of giving, unconditionally (ok, maybe the whole “naughty list” thing is a little Old Testament), without asking for anything in return except that we believe.  He inspires selflessness, generosity, and anticipation– all things I associate with Advent.

How can I say all that after having just heard straight from my three year-old’s mouth how Santa was the center of Christmas?  Easy.  He’s three.  He tells anyone who’ll listen that he just pooped.  He’d vote for Dora for president.  He uses Play Doh as currency.  He cries crocodile tears if his Woody pajamas are in the dirty clothes hamper.

He’s also the little boy who sat enthralled, in the rain, watching the whole living nativity at his grandparents’ church.  He was just as excited to give his teacher a gift as he was that a classmate gave him not one, but two bouncy balls.  As I type, he is curled up asleep with a Joseph figurine (he insisted that I sleep with Mary, his little sister have Baby Jesus, and his daddy take the donkey.)

I think he may be more Christ-centered than I am this Christmas… and I know “the truth” about Santa.