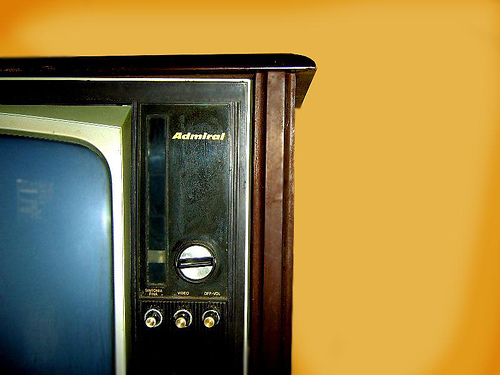 Last week, I took a big step in my parenting life… after years of saying I could never do it, I unplugged the TV.

I said I could never do it, even though I admired all the parents who had – or who had even completely gotten rid of their TV.  I could never do it because I liked to watch TV too much. I have my shows… and we are a huge football family around here.  If we got rid of the TV, we would be taking away something that can bring some enjoyment to our family, if used correctly.

The thing is, I wasn’t using the TV correctly. I was abusing it – over-using it.  Even though I set limits on myself, those limits were being broken almost daily – and I would make excuses for the times I turned on the TV.  “Oh, it’s OK this time – I just need to clean up the kitchen and start dinner… take a shower… write a blog post…” But those “rare” moments turned into daily occurrences, and I would take advantage.  “Well, while the TV’s on, I’ll just check email… read my blogs… play on Facebook…”

I had prayed about unplugging the TV a couple of months ago – and I did nothing about it.  I just fell back into our old routine, not obeying the Holy Spirit’s voice speaking into my heart.  But then we went to our parenting class last week, and watching TV was mentioned.  It wasn’t even the topic of the class – it was more like a side point.  But what was said spoke straight to me.

TV-watching usurps the parents’ right to teach our children ourselves. Though there is no research to back it up, it makes sense that for every hour of TV our kids watch, it could take 5 to 6 hours of constant parental guidance and attention to balance off the one hour of TV.

TV shows and movies have everything we don’t have – big budgets, flashy characters, and fascinating story lines. We only have our own little selves to teach with and entertain our kids.  It’s a losing battle when you think about the manpower (and money) behind the shows.  Even Christian shows (we love our VeggieTales around here!) still may not teach your children what you want them to learn: I think Elias learned some about whining and lying from Christian shows and movies – they were the examples that were being used to correct the characters, but he was still exposed to that behavior before I would’ve preferred it.

We do have things on our side, though.  We have our love and concern for our children, we have one-on-one time with them, and we have the Lord. These factors can overcome all the negatives about TV – again, if they are applied correctly.

After our parenting class, I decided to even the playing field and actually go ahead with unplugging the TV.  I unplugged it rather than just not turning it on because my flesh is weak – I know how easily I cave in to doing it “the easy way.” Once the kids got under my skin long enough, I would reach for that remote rather than hitting my knees in prayer… so I took that option away from me.

And what happened?  No whining, no crying, no tantrums, no fits.  A nice quiet day, occasionally punctuated by Elias’s request for a show… which I answered with a simple, “No, no TV today, buddy.”  And there were really no questions even asked about it.  Frankly, I was shocked.  This kid who used to bug me to distraction about watching a show (or 2… or 3…) took my simple, determined “No” in stride and moved on.

The days that followed have seen more playing and laughing and creativity in our house than ever before. And I’ve even gotten things done without the TV – I sorted and organized all of the children’s clothes in the house, got some sewing done, cooked meals, cleaned a bit – all while the boys were awake!

This is not to say there has not been any TV watching going on around here.  I plugged the TV in this morning because we are having a sick-with-fever day – we watched a movie together, cuddled on the couch with our juice cups and blankies.  There is room for grace, right?  Right.  No feelings of guilt about the movie, because the past 7 days have not been filled with TV as well.

It has only been a week, but I now have this week under my belt – the knowledge that I can do it – that it can be done! I’m excited about what this means for my kids and my household in the future… and being the ones truly impressing our children has both Josh and me excited.

Does anyone have any experiences like mine?  Any struggles with the TV that you want to share?  I was hesitant to write this – first, because the struggles I was having with the TV truly were excessive, and second, my solution feels kind of extreme, even to me.  But if this is something you struggle with, please know that I have been there – and you have my prayers.