From the time I learned that I was pregnant with Elias, I started dreaming about his nursery.  I wanted something that would “grow” with him… that I wouldn’t have to re-do every year as he grew up.  Of course, over his 3 long years of life, he’s moved rooms and has had to deal with Momma’s decorating itches… I really cannot leave things alone for too long.  But I’m back where I started – wanting something that would go from being cool to a 3 year old to being cool to a 15 year old (is that too much to ask?).

The answer came from my mom – who saved every single map insert into National Geographic magazine from the late 80’s on.  Thanks, Mom!  I’ve known that the maps were available for my taking for a while… so I decided I would wallpaper Elias’s room in the maps!  A map-lover’s dream come true!  I thought about doing this a couple years ago, pre-kids, and way back then I found one site online about doing this – but when I went back to search for that site again, I had no luck finding it.  It was all up to me and my imagination.

I prepped the room by painting it a smoky light blue (there is more gray in the paint than there appears in the pictures).  Then I waited for a whole day when I could work uninterrupted.  6 months later (thanks to Laura, my sister-in-law), the boys were gone for a day, and I ran to the home improvement store and grabbed a bucket of wallpaper paste and some wallpaper hanging supplies (brush, metal angle thingie, little tiny wooden roller).

To prep, I wiped down the walls with a damp cloth, to take down any dust or cobwebs or whatever else gets on the walls of a 3 year old’s room.  And I separated out my maps to be sure I had enough and could find the ones I wanted easily.  My mom had saved about 60 of the maps, with a couple old road maps and travel maps thrown in to boot.  Some of the maps were ones I really didn’t want to hang – like the “Migratory Patterns of North American Birds.”  Serious.  Also some other history related ones… and I was going mostly for the blue-geography-book ones.  Since I had enough maps to be picky, I set the bird and history maps aside…  I had a big world map I wanted in a prominent place, as well as a map of the US.  Then I had maps of each of the continents (including Antarctica!) and maps of individual countries, and I had a map of Virginia, too…. 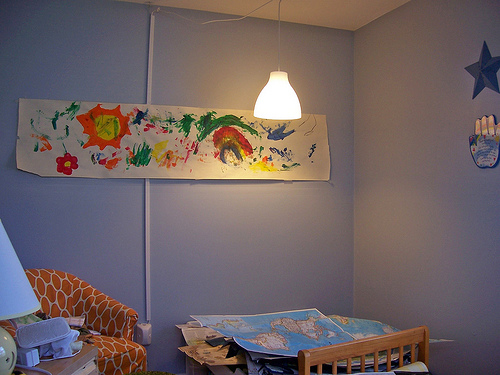 There’s a picture of the room before.  I had already started to set things up and separate my maps out when I remembered I needed a “before” picture.  This is one of the walls I covered in the maps – I chose to do 2 of the walls – the one with the door to the room and the one opposite it.

Please forgive me for only having one picture of the work in progress.  I was racing against the clock, and I had wallpaper paste all over my hands – so this one picture was all I could do. 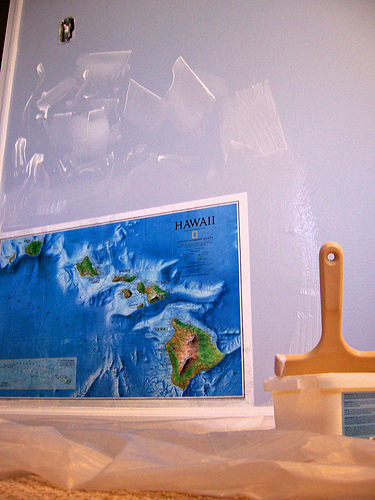 The picture gives you a basic idea of how I did this – slap some wallpaper paste on the wall, stick a map up, and repeat.  And that is the basic idea.  However, here is what I learned: 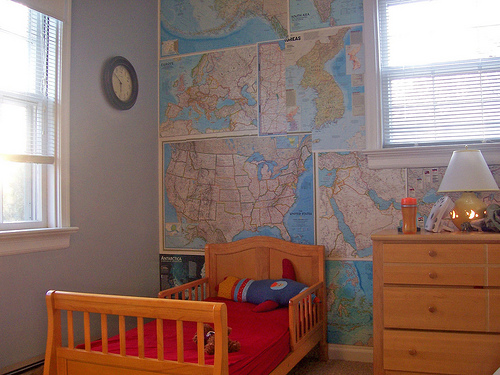 I am so pleased with the result!  I was thinking about painting over it with a tinted glaze to antique the maps a bit, but once I got everything up, I didn’t want to mess up the beauty of the maps! 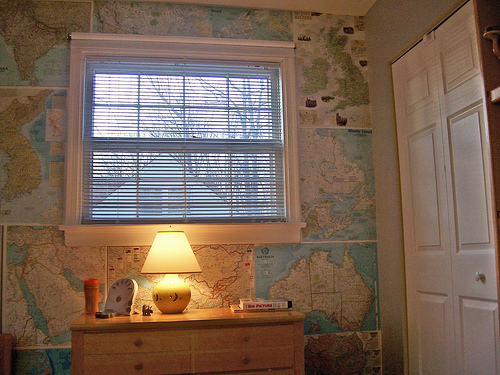 Elias was so excited, too – and he’s already learned so much!  Seriously!  He knows where we live on the US and world maps, and he knows all about Egypt and Antarctica, and he knows about constellations, too, from one of the space maps I hung up.  When Daddy goes out of town for business, we show Elias where he is going, and we also have used it to show him where different missionaries are that we know. 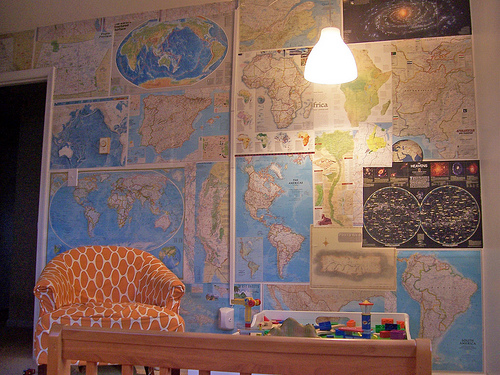 Don’t be afraid of this project – if you fell in love with this, I promise you it is easy enough for a novice wallpaper-hanger to do!  I’ve hung wallpaper before, and this was way easier!  I detailed all the things I learned so you can learn by my mistakes, and so this would be documented out in the internet somewhere…

National Geographic actually sells their map inserts in their online store… but they’re pretty pricey for a DIY project (at least to me).  Here’s another site that sells the National Geographic maps (even pricier!), and here’s a site that sells all kinds of maps. You’ll have better luck searching on eBay – enter a search on National Geographic maps, and you’ll see tons of individual maps for sale as well as lots of maps – you might be able to get a ton of maps without spending a ton of money!  Also, try old Atlases (from library sales or yard sales) or individual maps from yard sales.  If you Freecycle, you might be able to put out a request for maps and get a ton, too!

So go find some maps and make your little one (or you!) a map room that will last them for years to come!