You are here: Home / me / Sleepeasy Solution Update 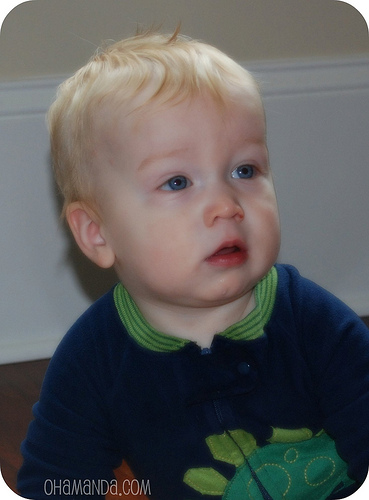 We are now on day 834 of the The Sleepeasy Solution

. Not really, but it feels like it. Anyway, the point is…

My sweet baby boy is actually sleeping through the night. He is actually NOT waking up to eat at 3am. WOO-HOO! So, if any of you are in the same boat, here’s what happened…you remember Day 1-4? (No? Well, please, go read every detail of my life…)

Day 5
I kept doing like the book said and I WOKE him up at 3 to feed him. This time it was just for 6 minutes. He went right back to sleep. But then woke up at 5:30 or 6am. We got him up like it was his normal wake time and I fed him. He cried nonstop after that so I put him back in the bed and he slept until 8:20!

Day 6
I woke up him at 3. Fed him for FOUR minutes this time. He fell right to sleep and didn’t wake up until 6:15am. I let him talk in his crib until 7. He was happy!

Day 7
This was the worst day. I woke him at 3. Fed him for 2 minutes. He cried for about 5 minutes after I laid him down. Then he woke up about a fifteen minutes later and didn’t go back to sleep for about an hour and a half. He wasn’t crying the whole time (sometimes it was just sniffling) but I stayed right by his door. And every fifteen minutes (or so) I’d go in and say, “It’s ok, baby, time to go to sleep.”  When he finally woke for the day at 7:20, he was as happy as I’ve seen him!

Day 8
Another rough day. I didn’t feed him at all. He woke up back to our old habit about 4am. And same as last night he was awake for about an hour and a half. I checked on him about every 15-20 minutes. He woke up at 7:20 for the day and was happy!

Day 9
Here’s where it starts to get better. I didn’t feed him and he didn’t wake up until 5:45. I know that’s still early but he wasn’t screaming…he wasn’t giggling either, but still this is the first time he’s slept this long in his life! That’s almost 11 hours!

Day 10
Was a little wonky. He would wake and then go back to sleep after 10 minutes. I did check on him once. But basically, he slept until 6:15.

So, it looks like we’re into a new wake time of 6ish. But I can deal with that! I’m just so surprised that the night-weaning worked! Not to mention it didn’t mess up my supply since I gradually weaned him. He’s been nursing better in the morning so I can tell he’s just picked up that nutrition then.

I wouldn’t say it was an EASY solution. But it is definitely the EASIEST of any I’ve tried! Are you so proud of me Asa?