You are here: Home / me / Gustafer Yellowgold: CD/DVD Giveaway

And the winner is….Jessica from Helping Mommys Win!

I have a confession to make: I actually like kids’ music. I do! I haven’t listed to one of my “grown up” cd’s since Lydia was born. My ipod probably doesn’t even know there is such a thing as non-kids’ music! We listen to Psalty, Yancy, Donut Man, Signing Time and Dan Zanes on a regular constant basis. But when my husband comes home…well, he’s a little more of a music guy than I am. He needs HIS music. He can’t listen to a kids’ cd 400 times in a row. (What is wrong with him?) He and Lydia have to take turns picking music when we’re in the car together!

So, I’m always on the lookout for music that is more “family” music—you know, stuff we’ll all like. Well, I just discovered Gustafer Yellowgold. No, thank goodness…it’s not actually a person’s name. He’s a little…uhm…well, here’s Gustafer:

He’s a native of the sun. He crash landed in Minnesota and has a pet dragon named Asparagus. (I’m not making this stuff up!) He’s also the brainchild of Morgan Taylor, a real musician who’s shared the stage with Bob Dylan, Natalie Merchant and Matthew Sweet (and some others…I just didn’t know who they were…don’t tell my hubby.)

Taylor started drawing Gustafer as a picture book—but then combined his love of music with his drawings and Gustafer Yellowgold music was born! His concerts are funny and filled with with minimally animated videos. (Which I love! Let the kids keep a little imagination and calm down the over stimulation!!)

Doesn’t that look fun? It reminds me of the concerts I would have gone to in college! Gustaf and company are on tour right now with lots of shows everywhere EXCEPT here in the deep South. Hmph.

Lydia and I poked around Gustafer Yellowgold’s website and it is super-cool. There’s lots of hidden videos and music ready to be discovered. Here’s a sampling… 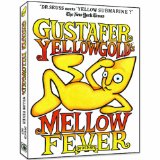 If you’d like to have a little Gustafer for yourself, just leave me a comment about your very least favorite kids’ song ever! I’ll announce a winner on Friday, April 10.

PS…just as a disclaimer, I haven’t actually listened to the whole album, so I can’t vouch for all the lyrics. But what I did listen to was all silly, fun, folksy songs about socks, dragons and nature.