You are here: Home / me / A Preschool Bible Study Part 2

After Part 1 of our Jonah Bible Study for 12 preschoolers, we did a fabu craft I found at Little Window Shoppe. They are called I Spy Bottles. The idea is that you fill an empty water bottle with small items (catalog them as you go), then fill the bottle with sand or rice. Later you shake, spin and roll the bottle to find all the items you put inside. Fun to make, then fun to keep and play with later!

I thought this would be a great Jonah craft. So, I collected the mini water bottles (what, like 8oz, maybe?) from church. (Our church provides drinks and snacks for all the volunteers. So, I just wandered around and asked everyone for their empty water bottles until I had enough! RECYCLING!)

Then I headed out to the Dollar Store to find our I Spy items. First on the list?  Jonah. I found army men, police men, firemen and cowboys and Indians. I ended up picking the police because they were blue. That seemed ocean-y. But I didn’t notice they all had guns in their hands. Oh, well.

I also found a bucket of craft foam fish stickers, a bucket of craft foam beads and a little bag of marble-y things you’d put in a vase. We divided these up into bowls and buffet-style, the kids filled their bottles. Of course, they only got one Jonah (aka Mr. Police Man). We called the beads seashells and the marbles rocks, so the kids thought it was very ocean like. 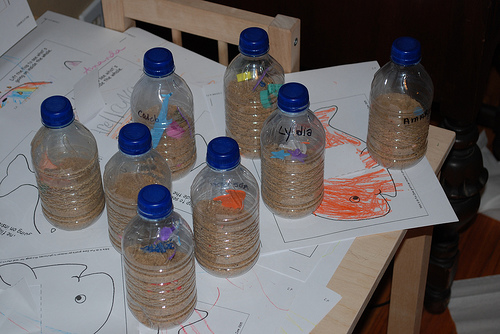 After everyone’s bottles were filled we went back to the Mine/Belly of the Whale and filled them 3/4 of the way up with sand. On their way out we gave them the top lined with white glue and then they sat down to play I Spy Jonah. It was really fun—but took much LESS time than I anticipated. So, we turned on some music and they had to play with their bottles for one full song before we took them back up and wrote their names on their bottles.

Next, my favorite: SNACK TIME! We had these plates ready before any of the kids even arrived: 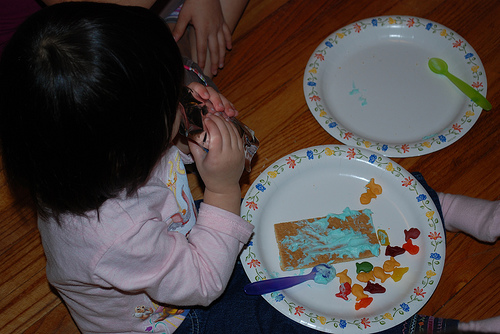 Ingredients:
one can of frosting tinted blue
one box of fruit snacks shaped like fish
one bag of goldfish crackers
one box of graham crackers

(note: I was going to do this with tinted cream cheese and crackers, but couldn’t find crackers big enough to decorate. That would have been a better low sugar option.)

We gave everyone a paper plate with one graham cracker, a few fish snacks, a few goldfish crackers and ONE spoon filled with frosting. They spread the frsoting on their cracker and decorated it with the fish snaks and crackers.

This eliminated mess and the double dipping that is likely to occur when a tub of frosting is set in front of a four year old. We also had a sample one made so they knew what to do when they got their plates.

After a few minutes of quiet snack-making and eating, we turned on Veggie Tales’ Jonah and before you can say Ninevah, the parents arrived! Everyone (including myself) was excited about their snacks, their crafts and HOPEFULLY their lesson about God’s plan for their lives!