You are here: Home / me / A tutorial: how to make a drumset out of formula cans

Due to some severe allergies that run in our family, we had to try multiple formulas with both boys to figure out what would work for them.  I always feel guilty about just tossing the empty formula cans, so I try to reuse them in whatever way I can.  With Deeter’s allergies, we wound up going through every formula out there – meaning we had a ton of different size empty formula cans banging around the house.  Get it – banging?  Ummm, anyway… in honor of EJ’s obsession with all things drums, and since he loves his Uncle Joe’s drum set, I thought the week we talked about the letter D would be a perfect time to create a drum set out of the empty formula cans. 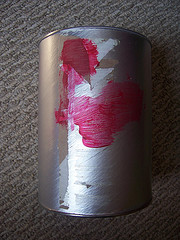 A little bit of background – as I collected the formula cans, I would wash them out to be stored, and I also peeled the labels off of them.  I thought about painting the cans as an activity with EJ, and I’m glad I tried it out first myself.  The smooth, silver paper that the formula cans are covered in are not suitable for painting – the paint scratches off very easily.  As you can see in the picture to the left, I also tried to peel off the silver paper to expose the plain cardboard underneath.  While the paint stuck very well to that surface, the silver paper was very difficult to remove.  In the end, I decided plain silver drum sets were very cool.  And we could decorate them with colored tape afterwards if we wanted to….

I set out to make two sets of drums – a set of 2 large drums, kind of like bongos, and a set of 6 smaller drums, more like a traditional drum set.  I gathered my hardware and tools… 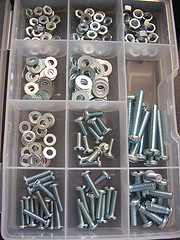 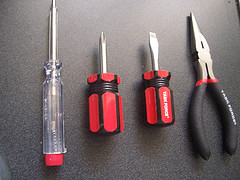 We had a case of “Assorted Screws and Nuts” laying around, which I thought would be perfect.  The screws all have blunt ends so no little fingers could get poked.  I also used an awl, two small screwdrivers, and some needle-nosed pliers from a tool kit we have. 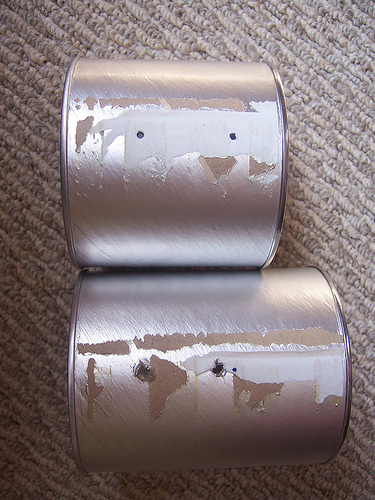 Measure out two holes vertically on the formula cans.  You’ll need two holes so the drums don’t twist on only one screw.  The top can in the picture above has the holes poked in with the awl, and the bottom picture shows the holes widened using one of the small screwdrivers – the holes are also closer together to attach to a short can. 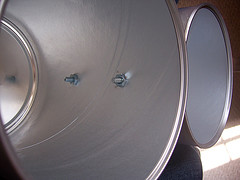 Using a short screw and a corresponding nut, attach two of the cans together, using a short screwdriver to tighten the screw while using the pliers to hold the nut still and do any final tightening as needed. 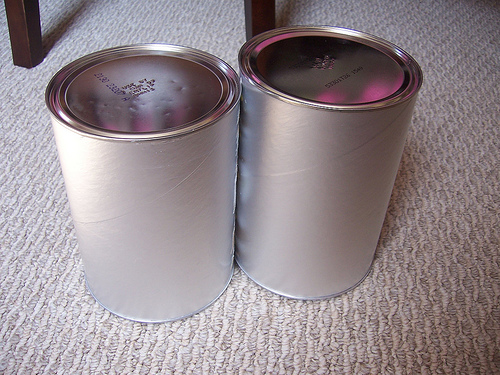 Et voila!  A fun and very loud drum set of two formula cans.  Now you are ready to attach other groups of two cans together to create a larger drum set.

That is, you’re ready to create a larger drum set unless your 2 year old drummer emphatically declares that… “drums do NOT get attached, Mommy. They need to be alone.”

In which case, you undo all the screws and watch as the individual cans are played with loudly and separately.