You are here: Home / me / The Reluctant Rainbow

We’re still on the letter “r” and have said our verse about 3000 times, we’ve read about Noah’s ark & his rainbow. We made rainbow bread. But I wanted to do a real rainbow craft. Most of the ones I found online were so sunday-school-ish and none of them really did anything for me. I was actually thinking about finding some prisms and just playing with those!

But yesterday I needed to do the dishes. Not as in pack them in the dishwasher…but as in actually DO them. Because our dishwasher BROKE. I’m not happy about it. I can hardly keep up with a dishwasher, much less handwashing!

So, I needed something to entertain Lydia while I attempted washing the dishes. I drew a rainbow on a piece of paper. I labeled each bow with the correct color (Roy G. Biv, you know?) then pulled out construction paper for each color. I ripped up some of it into squares (a la EJ’s letter “a”) and pulled out a little glue (I put it in a muffin cup with a qtip for spreading). 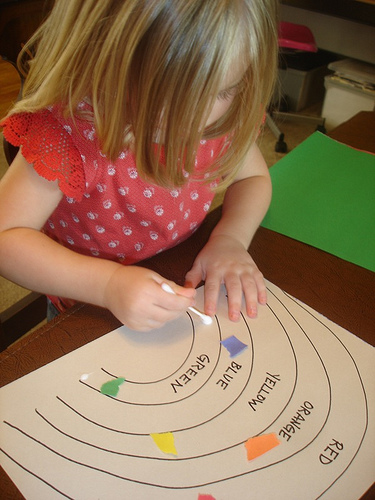 I did one square of each color for Lydia. (As smart as she is, I didn’t think she’d be able to read it.) I told her to keep adding pieces of paper to the right color until the rainbow was all filled up. Then I stepped into the kitchen (merely feet from Lydia) to do the dishes.

She worked for a minute or two, tearing paper and gluing. Then she called for me and said, “I don’t want to do this anymore.”

I was surprised. What 2 year old doesn’t want to play with glue and tear paper? I walked into the room and saw her rainbow. It had 2 giant pieces of paper glued to the rainbow. Not a small little square. She couldn’t tear them as small as I could.

So, I sat down with her and tore enough paper for the whole rainbow. We took turns gluing squares onto our rainbow. She matched the colors perfectly and was enjoying every second. 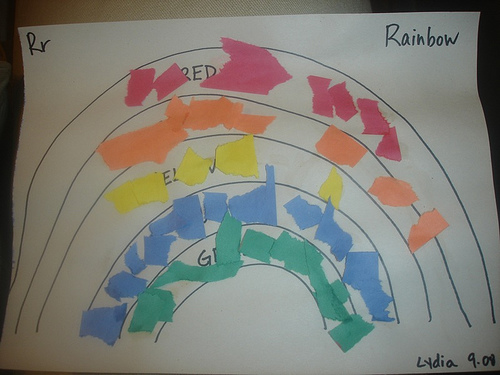 Finally, I decided she was getting it. I walked back into the kitchen to do the dishes and in just a few minutes I heard, “Mommy! I don’t want to do my rainbow anymore!”

Lydia doesn’t want more stuff to do. She wants interaction and love and attention and affirmation from her Mommy.

All these activities are just a vehicle impress my daughter. A way to show my daughter God’s love and His Word.

But our rainbow craft reminded me of what I really want. To impress my daughter—not with my housekeeping skills or my ability to multi-task or juggle several blogs—but to impress her with God’s love. I want the few hours we spend on God’s Word to be times Lydia remembers (at least in her subconscious!) as filled with love.

And now I’ve got the perfect excuse to not to the dishes.