You are here: Home / ABC Bible Verses / Let’s start at the very beginning… 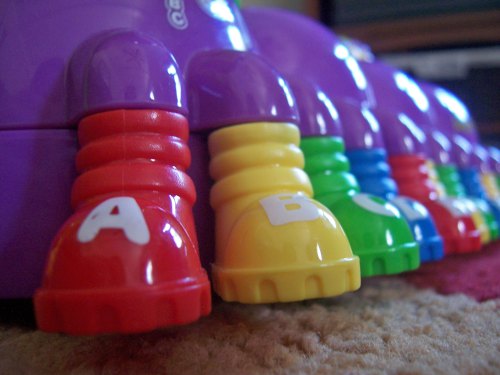 Hiya, everyone!  I’m Leigh – thanks, Amanda, for the wonderful intro!  I would’ve posted some before now about my prep for this week, but today got here before I was ready!

My son, EJ, is a couple weeks younger than Amanda’s beautiful daughter.  I wasn’t ready to start him earlier with any kind of “structured” learning (not that I would call what I’m doing “structured” in any way – anyone with a 2 year old knows that any structure you plan typically flies right out the window) due to our arrival of baby #2.  Well, now that said baby is 8 months old, I finally felt ready to get going.  Finally.

As Amanda said, I was really excited to peek in on what she was doing with Lydia.  I wasn’t ready for a full-on homeschool preschool curriculum – the ones I saw online kind of intimidated me.  I wanted to pick and pull from things that I liked.  And I’m sure I’ll be changing things as I go – I already learned some things about EJ’s learning style from our time this morning. 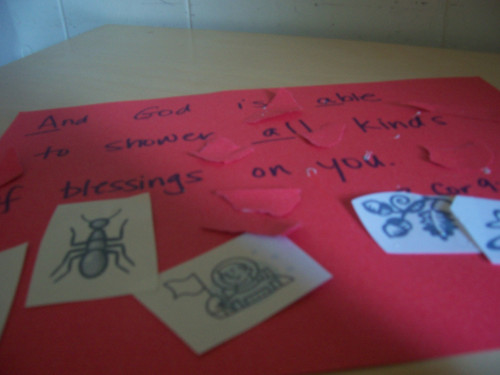 I copied the verse onto a piece of construction paper, and I printed out some clip art for “A” words.  We had an apple, an ant, an astronaut, an acorn, and an airplane.  All of them are some of EJ’s favorite things – especially the ant and the astronaut.  I cut them out and EJ went wild with the glue.  My idea was to kind of have the A word things “shower” down under the verse, and we’ll keep talking about the verse all this week.

I used Amanda’s idea for the alphabet worksheet from First School.  I love that site! 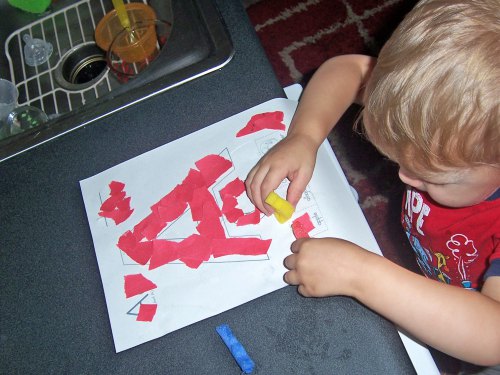 Crayons would not do to color in the letter A.  Once he had the glue in his hand, he would not let go.  So we covered all the letters on the page with torn pieces of red paper (red for apples).  He even covered the smaller letters and the writing on the side of the sheet.  He didn’t want to hold the paper up for me to get a picture of him with it, so this is what I got…

We talked about the letter A all morning.  EJ’s known his letters by sight for a while, so I had him point out A’s on signs to me as we went to the dentist (which has no A’s in it.  Except I got to say “AAAAHHHH” really big for the dentist this morning, so that was fun.)  We saw automobiles and an ambulance, and we “Ah-Choo’d” over and over (that was hilarious!).  He got to see Uncle Andrew and Aunt Jessie, and have apple juice for lunch.  He also told Poppy (my dad) all about his letter A words over the phone.  I got to sing “The Ants Go Marching” 5 times back to back on the way home, too.  I’m glad I looked up all the verses online before today – I couldn’t remember past “The ants go marching 4 by 4…” on my own.

So what I learned is that I cannot force EJ to do anything.  I already knew this in every other area of his life – I don’t know why I thought this would be any different.  I didn’t really try to force anything on him, but I pushed the verse too hard.  We’ll have to come back to that later today, and hopefully he’s decided it’s OK to listen to me say it over and over again.  Does anyone have any other suggestions about how to help a child learn a verse?

I am excited about the rest of the week.  We have a full week already planned, so squeezing in just a couple more Athings will be about all we can do.  But EJ is really getting into the A sounds and words that start with the letter A… and he’s already talking about B words and sounds, and even S words and sounds!  So he’s picking up on this fast.  I hope I can keep up!