OK, these impressive puns could get old. But I gotta tell you, I’m impressed with my daughter.

Like I mentioned, we watched Veggie Tale’s Queen Esther dvd in honor of the letter Q this week. Lydia loves all things princess. So, I knew this movie was going to be right up her alley.

(sidenote: Even though I’ve always loved Veggie Tales, we haven’t been big Veggie Tales watchers because sometimes I think they are confusing for her when she doesn’t know the Bible story first. I mean, vegetables dressing up like the Wizard of Oz to tell a fractured version of The Wizard of Oz/The Prodigal Son? Even I get confused!)

Anyway, Lydia has fallen in love with Queen Esther. We’ve watched it at her request every day since! It is beating out JoJo’s Circus, so that’s saying something! (I sing JoJo’s theme song in my sleep!)

We’ve been talking about the show as much as possible because the underlying message is courage–being brave because God is there with you. Well, this is exactly what Lydia has needed to hear. She is very shy and timid. We’ve even had to do a little “discipline” because of her shy behavior (she can manipulate with it and will even pretend to be shy to her family, etc.) I know she is actually apprehensive about some situations, so we’re just a litte lost about what to do with it.

A few weeks ago I was telling my friend at church about her behavior and she said, “Has anyone ever told Lydia she was shy?” I said, “Uh yeah, like a few 100 times.” She said, “You need to tell her she’s brave. If someone says, ‘Oh, she’s shy.’ Say, ‘Oh, no! Lydia is brave!'” I literally slapped my forehead and said, “Why didn’t I think of that?!”

So, for about a week or two we’ve been talking about how Lydia is so brave. This morning, I walked by Lydia while she was eating breakfast and watching Queen Esther. She turned to me and said excitedly, “Esther is not going to be afraid!”

Which was the perfect segue to what we did this morning…Lydia was invited to a Bring A Friend day at a ballet class. I knew she’d love it but would also be a little shy. I didn’t want her melting down and refusing to come off my shoulder while the other girls played and danced. So we talked about how Lydia was going to be brave at ballet class.

Then after getting dressed and kissing Daddy good-bye, she said to me, “I’m going to be brave like Queen Esther!”

And look who had the best time at ballet—not one tear, no whining or clinging to Mommy: 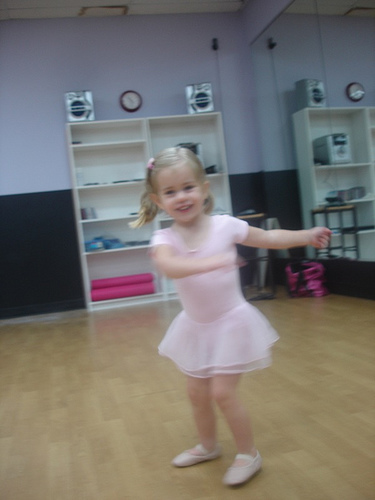