You are here: Home / me / The Sisterchicks Knit

For some unknown reason my sisterchick, Becky decided to teach herself to knit. She looked up a tutorial on youtube and has now knitted several scarves, a couple of hats and is working on a blanket. Well, the rest of the chickies were so jealous when we learned of this new skill, we decided to have a Knitting Party so Beckers could teach us how to knit, too!

(Why did we want to learn to knit, you ask? Well, I’m not sure. It’s kinda trendy right now, for one thing. And we’ve never been the kind to buck the trends. We also thought we might be knitting super-heroes and begin our million-dollar sahm-business with knitting needles and yarn.)

It took a couple of tries (like about an hour) to get us all with one little row on our needles. It’s too confusing to even relate to you. But when we finally cast on (is that the right terminology?) we were so excited I took a picture of our accomplishment! (I know, we look like ribbon twirlers and not knitters.) 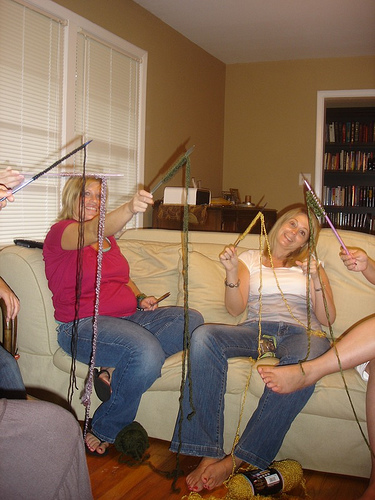 After several (let me repeat: SEVERAL) failed attempts, we actually all got the hang of it. I had to change yarn and cry a little, but by the end of the night, look what I had!

And if you want to be even more impressed (I know, it’s hard to believe that’s even possible!) here is where I’m at today… 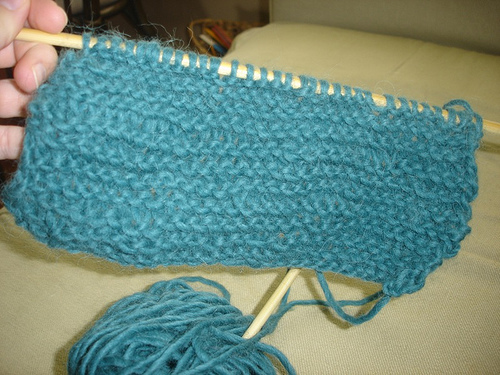 I feel very crafty. I think I actually kinda like knitting, though. It’s not so hard that it’s stressful, but it’s just active enough that you can’t really think about anything else. So, it’s relaxing in that way. Plus, every time I get to the end of the row I feel SO accomplished!

Now, if I will actually be able to turn this thing into a scarf will remain to be seen. Furthermore, if I can actually begin something else and make it look like, well, anything…I’ll be very impressed with myself! Hubby seems to think that I’m so slow at knitting that even if I paid myself minimum wage, one of my scarves would be worth $50. He thinks I should just buy a scarf instead. He doesn’t appreciate fine craftiness, obviously.

Not only was this a knitting party, we also had the Wii waiting for us! We all made a little Mii. 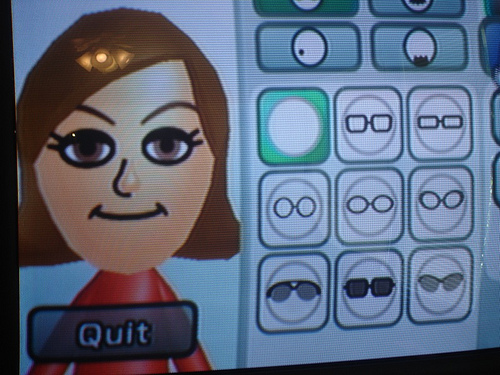 I’m not sure who this is, though. (Staci, maybe?) Anyway, the knitting got so overwhelming everyone ended up leaving before the Wii party got underway. But Staci & Becky stuck around, we let Les out of the back room and we played every Wii game known to man (or to Becky’s kids anyway). We did Mario Kart, Darts, Skiball, Bowling and Super Mario. It was quite fun.

Here’s Staci concentrating very hard on darts. How fun was that game?! 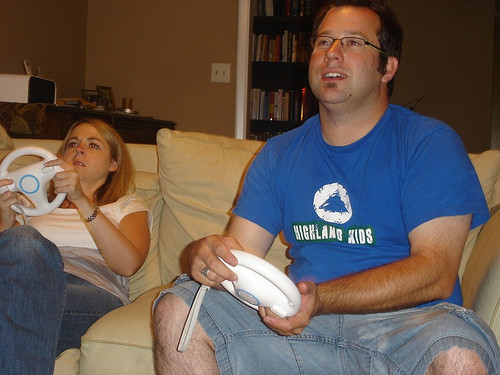 Hopefully soon we’ll get together to finish our scarves! And then celebrate with some more Wii. (Oh and with these too. OMG. Delish.)