You are here: Home / party / The Snowflake Party

I love to plan parties. I love planning the little details. I think that’s what makes the guest of honor feel special–when little details like the food and the napkins have been thought about. When my sisterchickies gave me a baby shower, everything was pink and green. EVERYTHING. First I felt humbled and loved because their party planning showed their love for me! Then I was jealous because I didn’t get to plan it with them! They spent so much time on the little things.

Now that I get to plan parties for Lydia, I want to do the same thing. Last year was her Purple Fairy party. It was so purple–even the guests wore purple! This year I wanted us to be in a Winter Wonderland with a Snowflake Party.

Why snowflakes? Well, about four years ago, Daddy and I were at Blockbuster and as we were standing in line I saw this on the front of a Martha Stewart magazine.

And I decided I would make marshmallow snowflakes one day! With a January birthday this was perfect! So, the rest of the party centered around this theme–snowflake decor, snowflake food, snowflake games and yes, a snowflake outfit.

Several months ago when all the winter clothes hit the store, babyGap had a cuuuute snowflake line. I think they made it just for Lydia! And these were the pants I eyed for months until they went on sale… 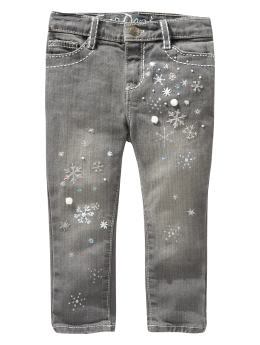 I mean, really! Skinny jeans in size 18-24 months?! And here’s my girl girl modeling them for us…

Are you in love with those shoes?! Oh my goodness! I almost laughed every time I look at her all night! And yes, she had snowflake hair clips in, too.

Now, onto the games…(are you bored yet? I hope not)…I set up 3 little stations. One was the “mural” you see behind Lydia. The kids could color and put snowflake stickers up. It was really cute and they loved it. How could you not love to color on the walls? 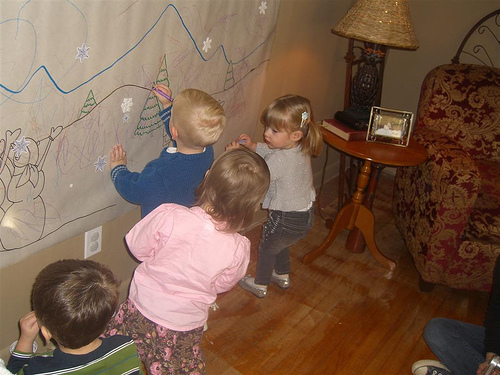 I also had a make-your-own-snowman/flake-with-marshmallows-and-pretzels station. 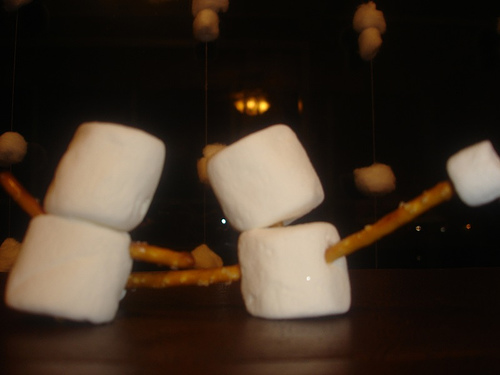 Well, the kids didn’t get into that too much. They had too much fun eating the materials instead. 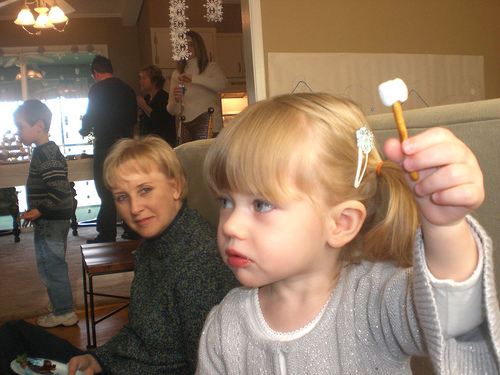 The last station was make-a-winter-scene-with-fun-foam. (I’m creative with the titles, aren’t I?) 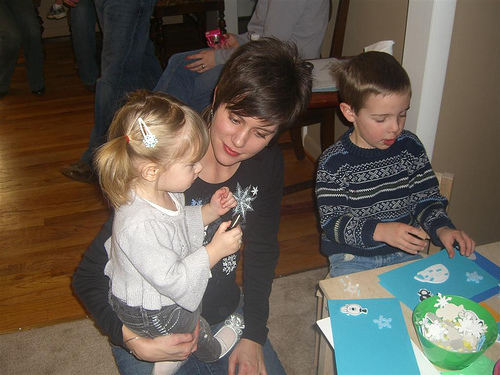 They made some cute ones…here’s one I discovered after everyone left. 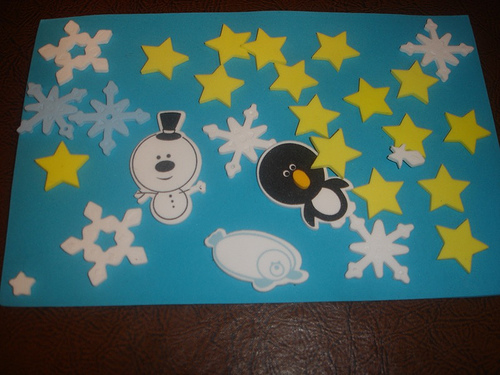 Oh, this post is already 3 feet long! I want to tell you about the food-that was my favorite part! Oh, and the guests and the gifts! Well, how about a Part 2 later on? Breakfast and Lydia are calling my name right now. Hope you enjoyed this much of the party!

❮ ❮ My Little Lyddie Lou
I wish I was LOST! ❯ ❯