You are here: Home / me / Vintage is best

Remember I told you about the trek into my parent’s attic? Well, ever since then, Mama has been wanting to get up into that attic and clean it out. My parents have lived in their house for 30 years, so even if they weren’t scavengers and pack-rats, they’d have lots of stuff. But I still love the attic. I feel like there is just a big treasure up there waiting to be discovered! Well, minus the unidentified animal carcasses.

Last week Mama and Daddy were redoing some wiring in their house. (They are so talented!) And stumbled upon the mother-lode of memories. I came home with a giant box of stuff after looking through tons of bags, boxes and envelopes. It was mostly papers from us when we were kids–our test scores, our cursive handwriting practice sheets, the usual. My adoption doll was in there. A pile of notes to rival Staci’s. Even a letter or two from an old boyfriend. gag.

A few of my favorite things:

Mama kept a scattered journal when we were kids. It was really more of a logbook. One of those skinny calendars men keep in their front pocket. And mainly, she only wrote in it when she was waiting for someone to pick her up (oh, the days of 1 car!) or when she was cleaning out her purse. But it was so cool because some of the entries were around 1978 when I was the same age as Lydia is now! So, Mama is describing me putting things in and out of containers. She writes that I loved to throw myself into the pillows on their bed and then peek up to make sure they were watching. It’s just so sweet! A little glimpse into what it was like then. Lydia will be overloaded with her childhood, I take so many pictures, she’ll have every milestone from here on out. It won’t make her tangible memories as special as mine, I think.

An Easter story/coloring sheet my brother made. You can tell his teacher had them color a picture of an easter basket, then cut it out. There are lines on the basket to write their story. Jason’s story was something like this: I like Easter because you get lots of candy. We also get eggs and have an easter egg hunt. I also get easter clothes and a basket. But the most important thing is that Jesus rose. All those other things are great, but Jesus coming back to life is the best! He was like in 2nd grade! Isn’t that awesome? He was always a little witness like that. I remember in about 4th or 5th grade he invited all the neighborhood boys over to our house to watch a skateboard McGee & Me vidoe so he could tell them about Jesus!

A letter from my great-grandfather to my grandmother. Grandmama had written, “For Amanda’s baby book” on the outside of it. We wondered why and then read this,

“Darrell & Cindy came by for a while Sunday pm and picked up the baby clothes. The baby sure is growing up. She looked at me with an expression on her face that was saying, “I don’t know you. Where did you come from?” She knew I was a stranger then smiled. She is a pretty baby. Cindy said she was teething and sometimes gets a little fretful…”

Isn’t that cool? He died before I could remember him. But it must have been a big deal that they went to visit him. Mama said he used to call them every day and she’d have to think of something to talk to him about. He was so lonely before he died.

My Strawberry Shortcake house. I love this thing. I can still remember placing these little figurines perfectly in the house. I remember how they smelled. I thought they were beautiful–like little jeweled candy! Even with a layer of dust and a little musty scent, I think they’re beautiful. So, it was so fun when Lydia played with it non-stop this morning! 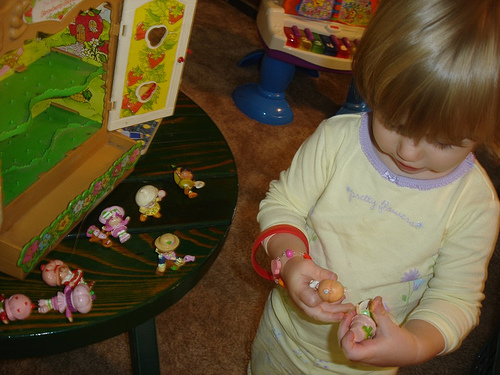 Don’t you love finding out more about your history? Even the not-so-distant past?