I picked up the first Harry Potter book at the library while I was in college. This was before I knew anyone heated up about the should-a-christian-read-harry. I don’t really want to get into that here because it’s obvious what I think. I read them all and loved them. If you don’t read them, I applaud your stance to protect your children from things that are worldly. Honestly. (And if you’d like to know what I choose to read them as an adult, feel free to email me, I’d love to chat about it.)

Back to me & Harry. I read the first 2 books at the library. The third one, The Prisoner of Azkaban, is the one where I said, “Oh my gosh. These books go together! Everything is connected!” That’s when the series took off for me. I read Year Four in a cabin at a kids’ camp. I read Year 5 in Florida. I read Year 6 in one sitting on the beach. Yesterday, I read “the seventh and final installment of the epic tale of Harry Potter.” (spoilers begin here!)

My friend Becky and I both decided to get the book at midnight. Beck had to read it quickly so she could pass it off to her son the next day. I decided to do it because Les got home late and I was up at 11:30. I headed over to Borders at about 10 till midnight. The parking lot was packed. I couldn’t believe how many people were there. Most of them were between 18-22 (my guesstimate). I felt like these were all kids who started reading Harry when they were 8-12 years old and now 10 years later, they are picking up with their friend for the last time. They were all (relatively) normal and almost all dressed up! My favorite costume was the guy who wrote in red “I must not tell lies” on the back of his hand! There were a lot of families there, too. All in all, it was a fun, exciting, expectant crowd.

They drove in the first box of books in a horse drawn carriage. The people riding inside were dressed up, including the little girl who got the first book, dressed as an owl, presumably as Harry’s Hedwig.

After standing in line for almost an hour and trying not to roll my eyes too obviously at the horrible pick-up-and-buy system, I got my book. Before leaving for my car, I ran into Professor Dolores Umbridge and had my picture taken with her. (Remember, I’m cuter in real life! And it was one in the morning!) 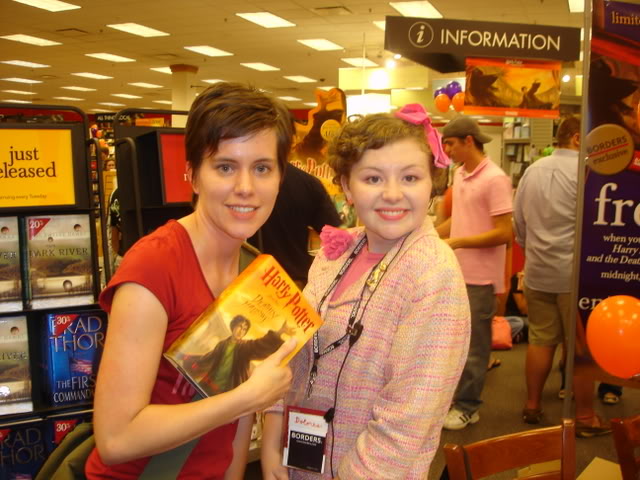 I stayed up for about 2 hours and read. It was done by 9:30 pm Saturday night. And I wiped tears from my face as I picked up the phone to call Becky. We had been texting all day with our reading progress. The first thing she said was, “Aren’t you satisfied?” And I was! I had been worried that I would be sad. No more Hogwarts? No more moving inhabitants of pictures? No more Platform 9 3/4? But I wasn’t sad. I was satisfied. JK Rowling did it. She left me happy and relieved and satisfied.

And to make a long post even longer, here are my 7 reasons I loved Year 7, Harry Potter & the Deathly Hallows–

“…and to you if you have stuck with Harry until the very end.”

2. Bill & Fleur’s wedding. It was one of the few light and fun wizardy-world moments for me. I loved that Fleur’s magical beauty was reflected on everyone around her.

“…then I declare you bonded for life.”

3. Kreacher. His Regulus story was perfectly creepy. I loved his fawning over Harry, Ron & Hermione. I loved his battle in the end!

” The house elf’s highest law is his Maser’s bidding…Kreacher was told to come home, so Kreacher came home…”

4. Everything about James & Lily. I loved that Harry found the picture of himself as a one year old and read the letter from Lily to Sirius. I loved seeing their house set up as a monument. I loved the sign scribbled with encouragements. I loved seeing the shadow Lily & James. It was just the glimpses of love and family Harry needed!

“Thank you, thank you, for Harry’s birthday present! It was his favorite by far. One year old and already zooming along on a toy broomstick, he looked so pleased with himself, I’m enclosing a picture so you can see.”

Ron: “He must have known I’d run out on you.”
Harry: “No…He must’ve known you’d always want to come back.”

6. Alberforth sending Dobby to rescue Harry. I knew the eyes weren’t Dumbledore’s. JKR was trying to trick us into thinking Dumbledore might be alive! Dobby’s sacrifice was moving. He was heroic and an equal to Harry & the wizards!

“Harry Potter…Dobby has come to rescue you!”

7. The Battle of Hogwarts and Minerva McGonagall. Professor McGonagall might be my favorite. I even love her in the movie and in the audio version. She’s straight-laced but a Gryffindor through and through!

“Hogwarts is threatened!” shouted Professor McGonagall. “Man the boundaries, protect us, do your duty to our school!”

8. Neville coming out of that portrait as a true leader in Dumbledore’s Army. He was just awesome. He knew Harry would come. He told Aberforth what to do. He fought bravely. He made his Gran proud!

“In one swift, fluid motion, Neville broke free of the Body-Bind Curse upon him; the flaming hat fell off him and he drew from its depths something silver, with a glittering, rubied handle–”

9. The Prince’s Tale. Oh. my. goodness. It’s too much. I KNEW IT! Snape is Dumbledore’s man through and through! He loved Lily!

Snape:”Very well. Very well. But never–never tell, Dumbledore! This must be between us! Swear it…I want your word!”
Dumbledore: “My word, Severus, that I shall never reveal the best of you?”

10. King’s Cross. So much to think about here…it reminded me of the deeper magic of Narnia that the White Witch didn’t understand.

Harry: “…I didn’t defend myself! I meant to let him kill me!”
Dumbledore: “And that…will, I think, have made all the difference.”

11. The showdown between Voldemort & Harry. They both revealed their true nature by the spells they chose to use. Voldemort used Avada Kedavra, the killing curse. Harry used Expelliarmus, to disarm his opponent.

“It’s your one last chance..I’ve seen what you’ll be otherwise…Be a man…try…Try for some remorse…”

12. And the best line in the whole book is when Harry responds to his son Ablus about his fears that he might be put into Slytherin upon his arrival to Hogwarts,

“Albus Severus…you were named for two headmasters of Hogwarts. One of them was a Slytherin and he was probably the bravest man I ever knew.“

(It still brings a tear to my eye!)

OK, so I thought of more than 7. But that just goes to show how much I liked it. So, did you read it? What did you think? If you blogged about it let us know, so everyone can read your thoughts, too!