Lydia hasn’t had the best experience in the church nursery. She knows when we start walking down the hallway we’re about to leave her all alone. And she starts screaming. She always calms down but the nursery workers have told us several times she won’t let anyone put her down!

So yesterday when we got to church she started signing “cracker” for no apparent reason. After the 12th time, I decided they must give crackers to her in the nursery. So, when we got to her door, I asked the nursery worker about it and she confirmed the cracker-fest from last week. I told her to feel free to give Lydia all the crackers she wants! Then we ran away as quick as we could to the sounds of Lydia’s screams.

We went to church. Sang. Listened. Tithed. Prayed. Then tromped back to the nursery to get our offspring. We tried to peek into the room to see how she’s handling life without us. We see her shimmying out of one of those tiny little chairs at a tiny little table. Then she locates a ball, picks it up and carries it around. She is oblivious to the parents at the door way and is just having a grand time by herself.

We finally see her, the nursery worker hands us her bag and we see this inside: 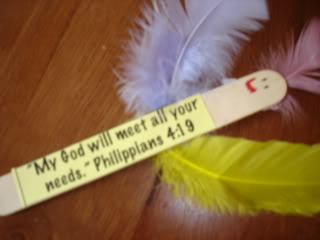 Her first craft! You would have thought she just aced the SATs, we were so excited. “Lydia what is this? Did you make it?! It’s so good! You’re a genius! I love it!” Obviously she didn’t do anything but make eye-contact with that popsicle stick. But don’t you just love those volunteers who made that thing?!

Then, when we asked her what it was she signed “bird”!

She knew what it was! Now, in case you didn’t look very close, that popsicle stick doesn’t look anything like a bird. It looks like a tongue depressor dressed up like a Native American, but not a bird. And Lydia doesn’t know feathers are on a bird. So, that tells me that in her class, they taught her a story about the birds. (Probably this one.) And when she saw the *ahem* bird it reminded her of the story they taught.

Those workers in the nursery may have thought they were handing out crackers. It may have looked like they were only wiping noses and tying shoes. But in fact, they were introducing God’s love and provision to my daughter. They were spending their time making an eternal difference in the life of dozens of toddlers!

Jesus promised that when we hand a cup of cold water to a child, we will surely be rewarded. I pray God’s greatest blessings on the people that give my Lydia the true Living Water!