You are here: Home / Kids Crafts / How To Make a Mini Marshmallow Shooter Gun From PVC Pipe

Here it is! How to make your very own mini-marshmallow gun out of PVC pipe! 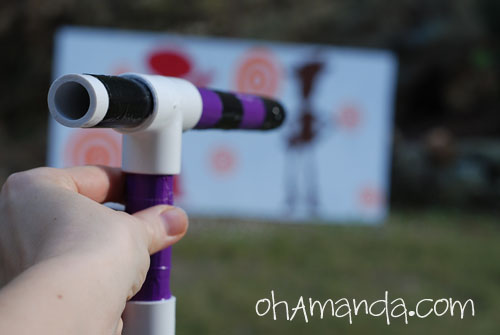 This is my gun. You like? I thought it was pretty awesome. And if you look closely, you’ll see you don’t need much to make this gun.

In fact, calling this a tutorial might be a lie. Here’s the gun broken down for your convenience: 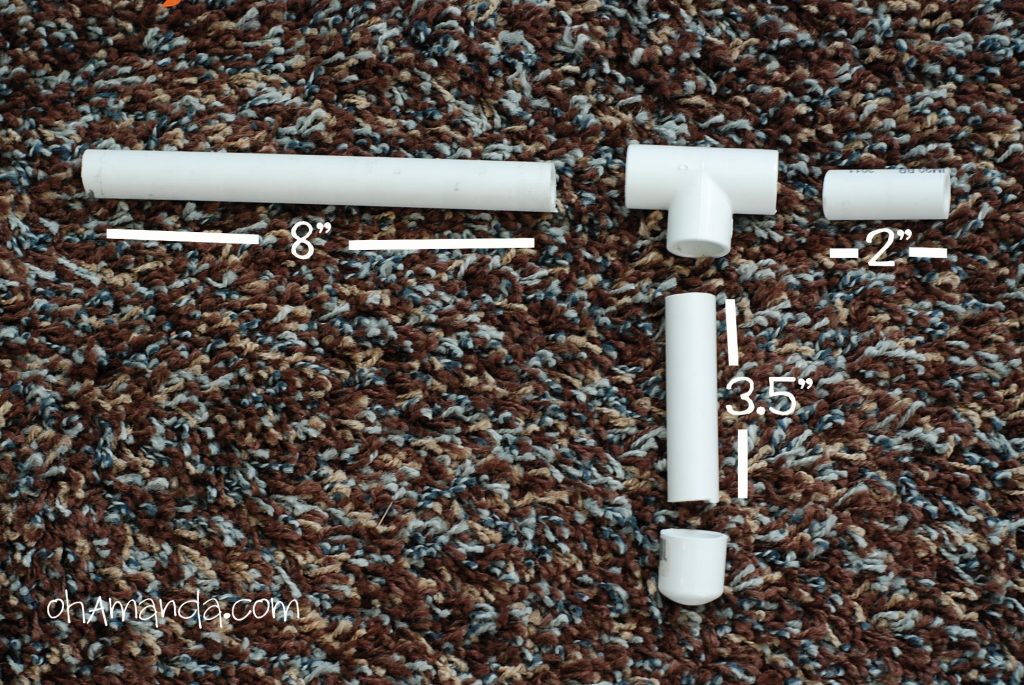 If you walk into Home Depot’s plumbing aisle, it will take you all of 3 seconds to locate all this stuff. Your only problem will be if you’re making several of these guns. Then you’ll have to do a little figuring on how many to buy. But it’s all pretty cheap–the 10′ half-inch pipe was $1.68, the T was $.56 and the caps were $.27! We’re talking less than $3 each!

My husband cut all the half-inch pipes with a jigsaw. But he said miter saw or a skill saw would work a little better. Also (I just asked him if I missed anything in this post) he said, “Don’t forget to load your mini-marshmallow in the mouth side!” For some reason, it works better from there than the end. More lift?

And I know it will be tempting, but don’t reuse the marshmallows. If they get wet, they will stick to the inside of your gun. YUCK.

Once you’ve got the basic gun down, you can add more pieces for cooler and more high-tech guns. Here’s all the different ones we made. The longer the gun is, the harder and faster you can shoot the marshmallow. But the stronger you have to be, too. The little kids couldn’t shoot the big ones very far. And it took Asa about 15 minutes before he could even shoot a marshmallow out of his little revolver! 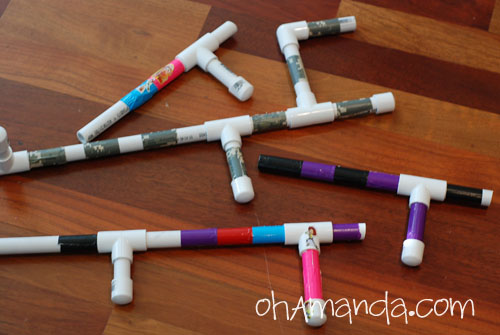 And there you have it! Just beware, if you make these guns, you’re going to have to stock mini-marshmallows. And having an open bag of marshmallows in your pantry? That’s REALLY dangerous!

See how we used these guns at Asa’s Toy Story *3* {Midway Mania} Birthday Party!
Pin It