You are here: Home / Devotions for You / Daddy in Five Minutes 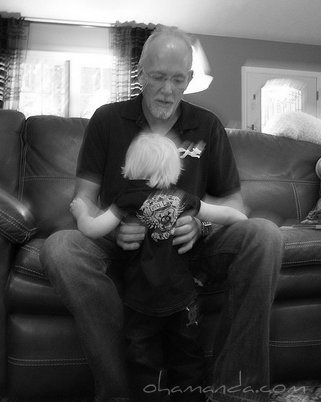 It’s not so much how Daddy looks–although he looks different since he’s been through chemo and hepatitis C treatments. It’s more of how Daddy feels and how he makes others around him feel.

We weren’t even up their front stairs and Daddy already had the door open. Asa and Lydia walk through the threshold eagerly anticipating the fun to be had at Papa’s house. Daddy looks down at them and feigns surprise, “What are you doing here?” But when you look around, you know he’s been waiting on his treasured children. There’s a new cartoon playing on the TV, freshly baked cookies in the kitchen and the candy jar is stocked.

He’s tall. I still think he’s the tallest man I know, because it’s more than stature that makes a man tall. He always wears black. In a motorcycle, rock-band kinda way. And usually? A silver chain or two. It’s just him. He’s got a style that just screams HIM.

His whole face changes when he talks, tickles and gives to his grandkids. His hands are worn from 10 hour days. But they are eager to give of his stuff–kitchen gadgets, candy in brown paper bags or CDs.

Ah. It just kind of ends. I could write for 5 hours on Daddy! But I’ll stop there. Wanna try a 5 minute post? Wanna read some more? Head over to the ever fabulous Gypsy Mama!