You are here: Home / Travel / A Second Honeymoon in Asheville, NC

We celebrated our 20th wedding anniversary last week. TWENTY YEARS! That’s TWO DECADES. I can’t even comprehend that I’m old enough to be married that long!

To celebrate, we had our own dinner at home. My friend Heather always celebrates her anniversary with a family birthday party and I loved the idea. So, I made some of our favorite food, bought a teeny tiny wedding cake from Publix and we ate together with the kids to celebrate the day our family began.

We gave each other gifts, too. My husband bought me a tree! A dogwood tree! I found some limited edition t-shirts from Disney’s Animal Kingdom’s 20th anniversary (we share an anniversary with them) for us. Annnnd, I even bought myself a gift. Well, James Avery sent it to me. It’s a beautiful charm necklace (you just slide any charm on) and “key to love” charm. 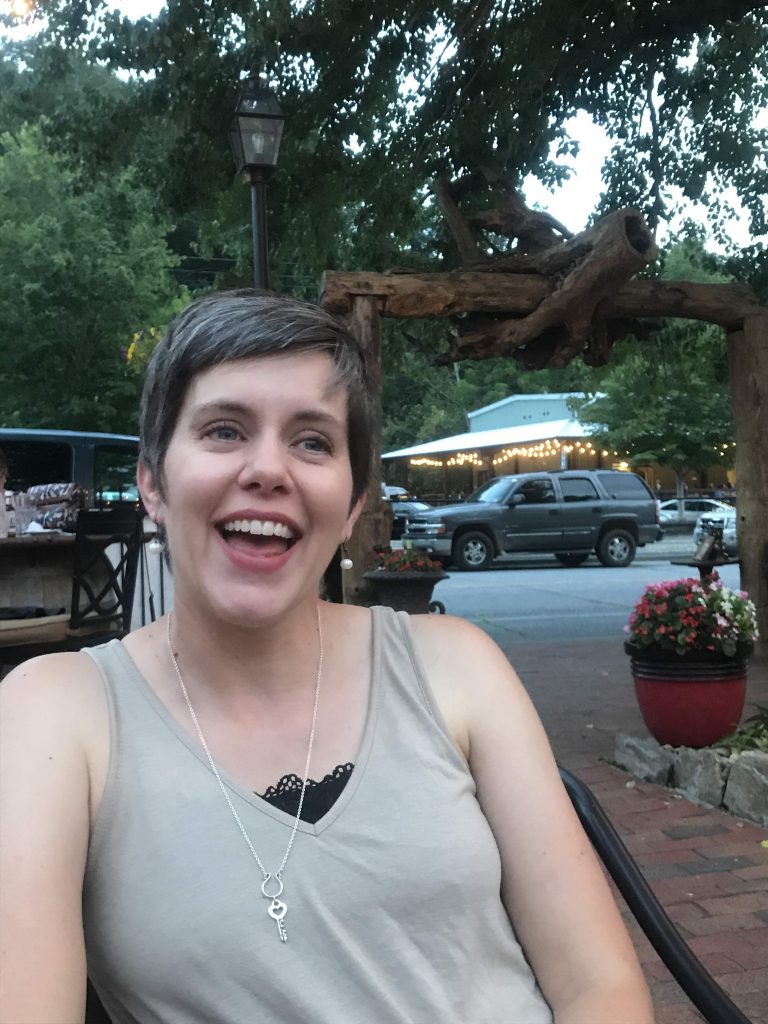 Want to know more about the key to love? What I’ve learned in twenty years of marriage? Click over to read my more serious, less-about-food anniversary post here!

But the real gift after all those was a trip to Asheville, NC! The kids were at Camp Primo and we got to spend six glorious days alone exploring and playing and eating!

On the way, we stopped off at the Nantahala River to go rafting.

I wish we had a picture to show you. Basically, imagine me in a kayak with someone throwing a cooler filled with ice on me. That’s basically how it was.

After that adventure, we decided to try something else new to us and went to a Bed and Breakfast (which I can never say correctly and it always comes out as “bread and breakfast”!) we found on AirBNB. And praise-the-Lord it was better than having cold water dumped on you! 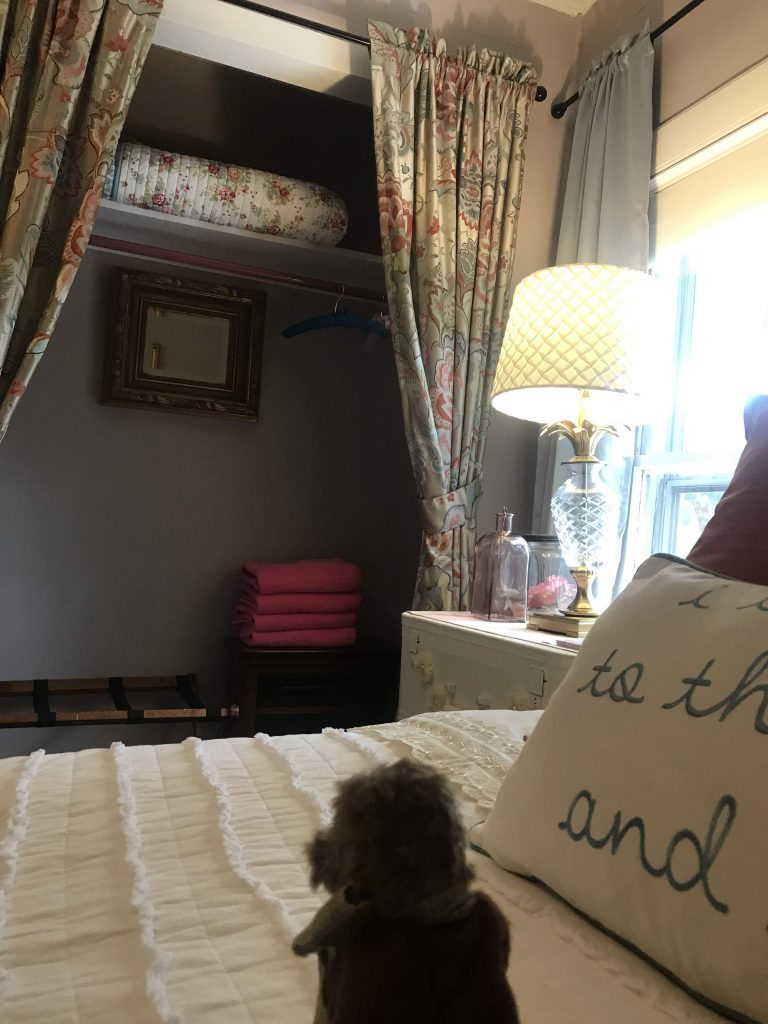 In fact, if you’re in the Nantahala area–or even if you’re not, make a trip and visit the Whistle Stop Inn in Dillsboro, NC. Each room was decorated in a train theme (Conductor’s Room, the Orient Express, etc.) and was so adorable! It was right in the middle of downtown Dillsboro with tons of great food just a step from your doorway.

I’ve always been afraid a BnB would feel too much like staying in someone’s house and not enough like staying somewhere special. But this place was such a nice mix of both. It felt less stressful than the hustle and bustle of a hotel, but still so clean and nice.

After our jaunt down the river, some tacos at Forager’s Canteen (get the pulled pork tacos!), we decided to do a little mountain biking. One of the gifts my husband gave me for our anniversary was mountain bikes. We’ve been wanting them for awhile and have done a bit of biking with the kids. I like it because it’s like hiking–just faster!

However. This mountain bike trail was in a word, TERRIFYING. I think the path was about 4 inches wide and set on the side of a mountain trail so that if you swerved to the right at all, you would fall to your death in the mysterious fathoms below. I was literally praying the whole way. 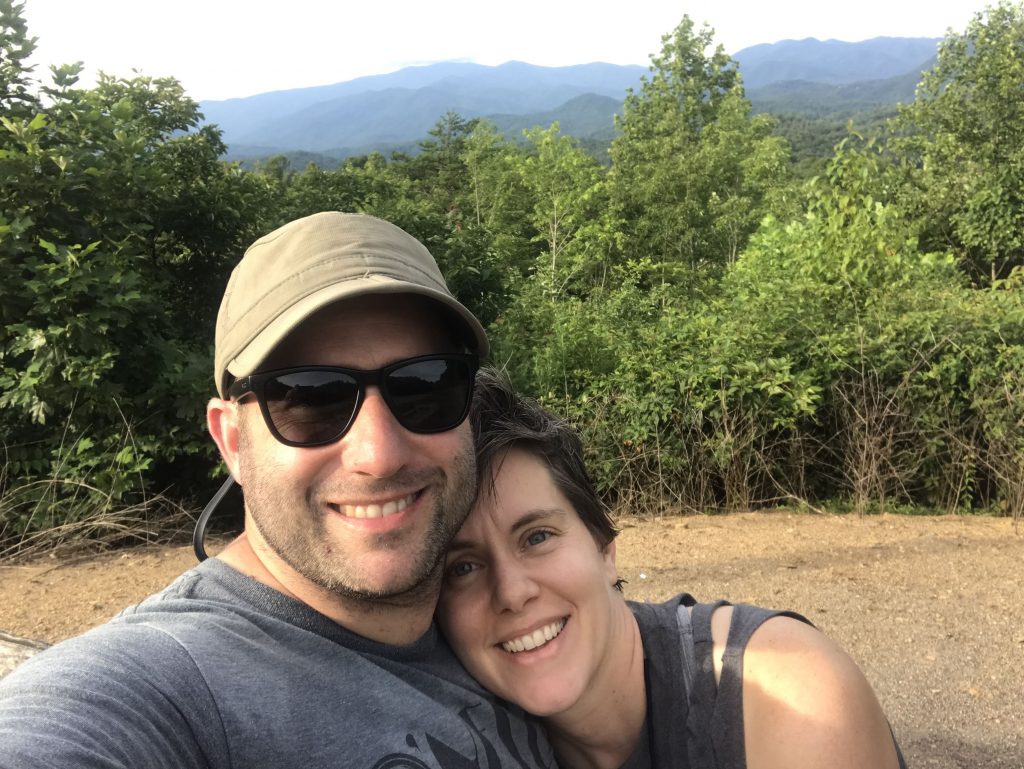 After two nights at the Whistle Stop Inn, it was time to move on to Asheville! My husband booked us a room at the Grove Park Inn. This is a historic hotel that makes every single must-do list in Asheville. It’s absolutely stunning, built in 1913 with so much historical detail–including the original manual elevators!

However, no one told us (I’m looking at you Trip Advisor and Omni Resorts website!) that the Inn is so historical that they haven’t updated the rooms at all. They still have the same color (freshly painted) they had in 1913. It’s called “squash” and yes, it’s squash yellow. The furniture is stark wooden pieces that would fit right into a Boy Scout cabin.

Our first room (yes, first), was room 462 and was the size of a large bathroom. The closet door couldn’t open all the way because the bed was so close to the wall. The window was so small and high up, my husband had to crawl on a chair to see out. There was no dresser and only one small chair to sit in. 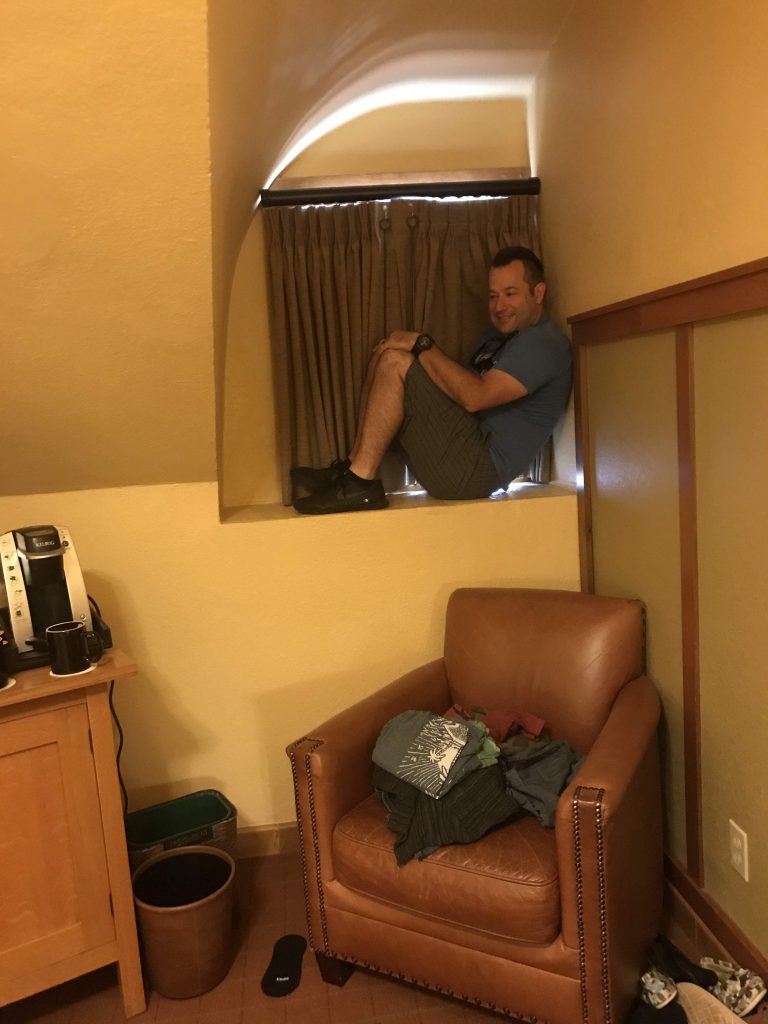 These rooms were going for $400 a night! (We were Priceline.com-ing it, so it wasn’t that much!)

After the first night, we asked the front desk for a new room (with a King sized bed for goodness’ sake!) and were so happy to move into a new bigger room. In fact, after getting used to the idea of stepping back in time and immersing ourselves in 1913, we really enjoyed our room. You could even open the windows! 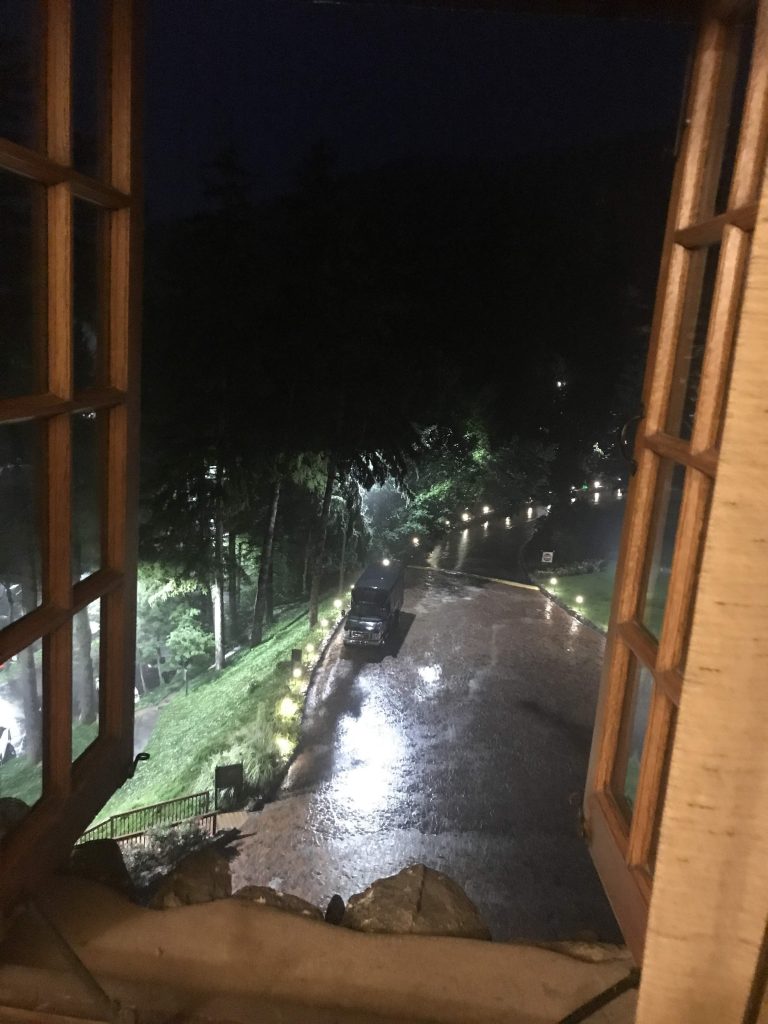 In Asheville, there are really two things to do: go the Biltmore and EAT.

I fell in love with the Biltmore and can’t wait to take the kids there. It boggles my mind that a single man built that house to live in! I just can’t understand what that lifestyle must have been like. I could have gone on a 4 hour tour and still want to learn more. 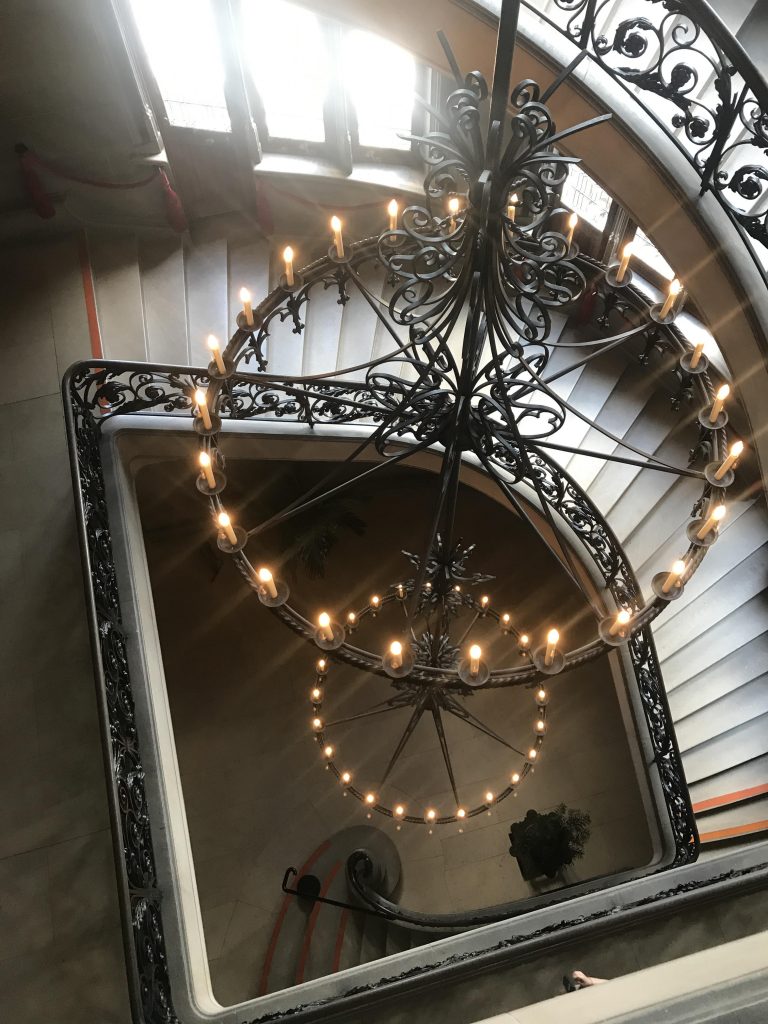 Now, the food. Oh, the food! I won’t regale you with every detail but here’s a mini list of the fabulous food (along with a picture of my husband and our food) you should eat while you’re there. (Hat tip to The Spicy Perspective’s very thorough list of best Asheville restaurants.) 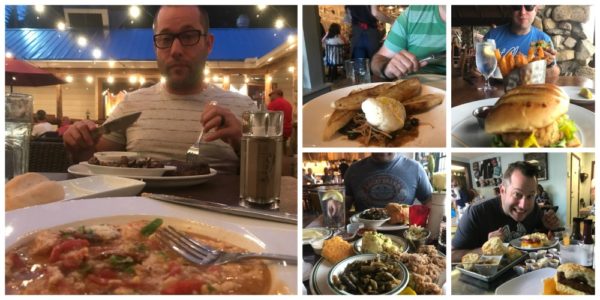 Biscuit Head (Goodgravy! Seriously, get all the gravies.)

Rhubarb (Best food I’ve ever had. If they still have the Goat Cheese Buffata, get it!)

French Broach Chocolate (I got a liquid truffle!)

While in Asheville, we also found one more mountain biking trail in the Mount Pisgah National Forest and it was less terrifying than the first. Although, it did start pouring down rain and I had to slide down the mountain on mud and then change my soaking wet clothes while standing in the middle of the parking lot. But, other than that, it was fun! 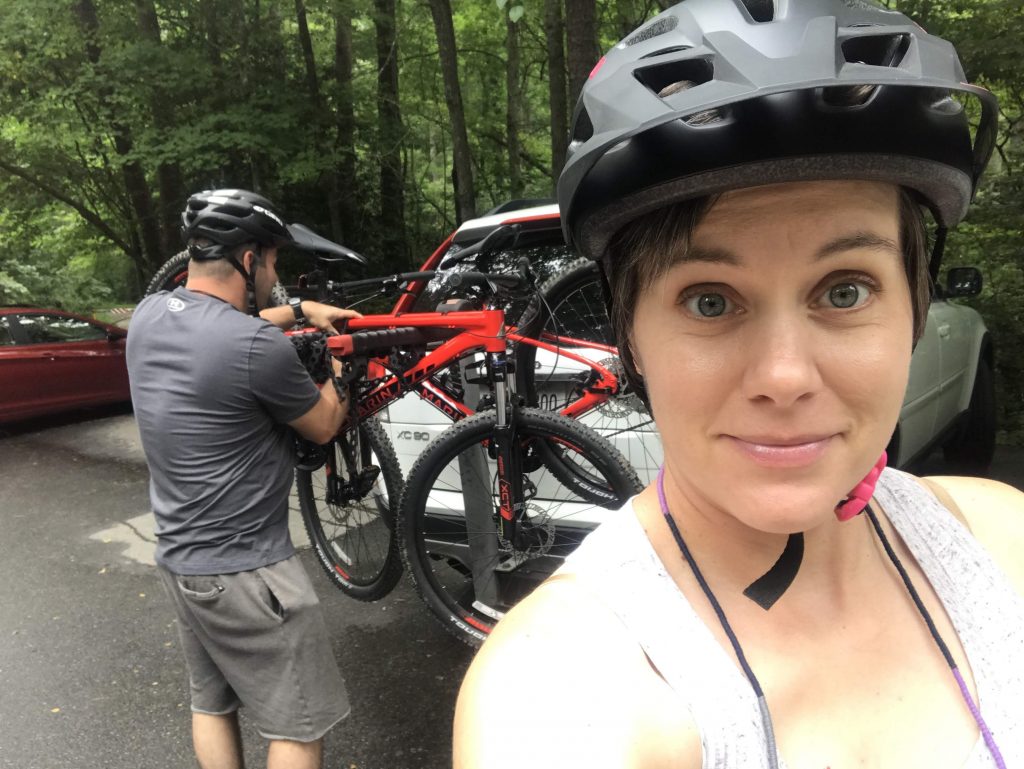 So, there you go. Ice cold water, mud slides, mountains of food and switching hotel rooms every other night. A perfect twentieth wedding anniversary trip! Well, it was for us anyway! A wonderful trip with a wonderful guy!

Don’t forget to read my reflections on 20 years here!