You are here: Home / music / The Triumphal Entry 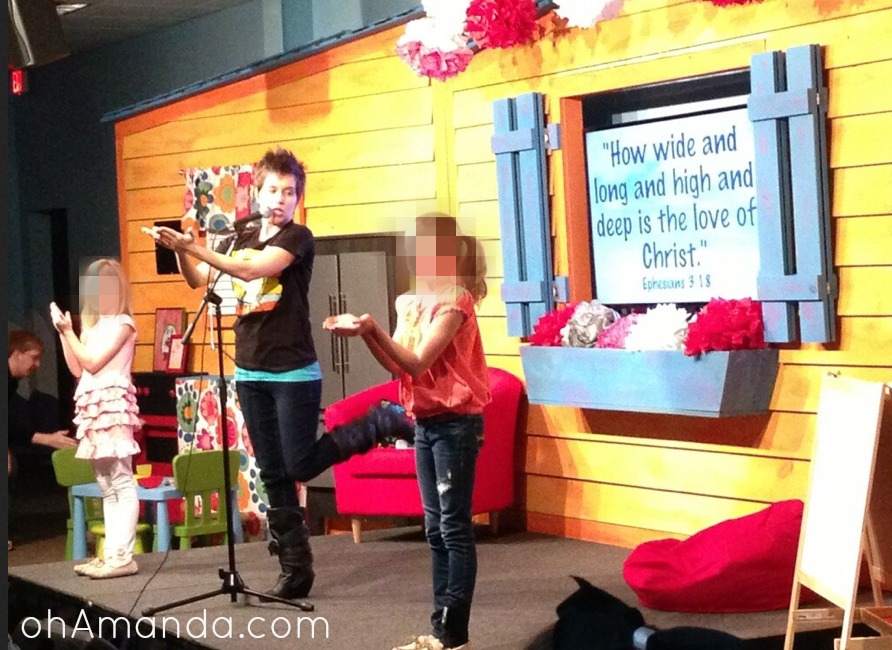 That would be me. In our preschool large group class. With one leg flipped in the air.

At our church, I am a volunteer over all the worship leaders, assistant middle-school-aged worship leaders, the tech team and storytellers for the preschool department. I really love it and is really a church-y version of what I like to do here on this blog–set up experiences for adults and kids to know and love the Lord. I guess that’s my one skill set. *grin*

Last week, I shared with our team about worshiping through music with kids. Although most of you probably don’t stand in front of a crowd of 3 and 4 year olds and sing songs, I think as parents and leaders of kids, what God says about kids and worship is applicable to you.

You remember the Triumphal Entry story? It happens on what we call Palm Sunday. Jesus is coming into Jerusalem for Passover. He tells his disciples to go get him a donkey from a certain main in the city. They do and then put their coats over it so Jesus can ride on it’s back.

Jesus then rides into Jerusalem on a lowly little donkey. But if the crowd’s response is any indication, it could have been a spaceship or an elephant! The whole city is stirred into a frenzy–people are shouting, “Hosanna! Save us! Hosanna! Son of David! You’re the true King!” and throwing their coats down in the path of Jesus and the donkey. Then, they cut branches from the trees and wave them to Jesus and lay them down with their coats.

It wasn’t the solemn little parade you see in picture books. It was more like a romp!

If that wasn’t enough of a commotion, Jesus hops off the donkey, walks into the temple and starts turning over the tables of the moneychangers. He yells at them for defiling God’s house and all the while, there are little kids around yelling, “Hosanna! Hosanna to the Son of David!”

Anyway, the Pharisees have had enough at this point. They finally confront Jesus and say, “Do you HEAR what these children are saying?”

Jesus turns to them with his most awesome Jesus-voice, “Yeaaah. Haven’t you read the Scriptures? “From the lips of children and infants you have ordained praise.”

{You can read the actual, non-amanda-fied version in Matthew 21}

So, here’s the good part:

Why do you think the Pharisees were so ticked about the kids? I think (although not expressly shown in Scripture) they knew that once you snag a kid’s heart you’ve got ’em for life. They knew that the kids were showing the heart of the city.

But it gets even better:

When Jesus turns to them and says, “Uh, hello? Haven’t you read the Scriptures?” He quotes Psalm 8:2 which says,

From the lips of children and infants, you have ordained praise because of your enemies, to silence the foe and the avenger.

God ordained praise from children and infants. We’re talking little bitties here. And why did he ordain this praise? To silence enemies. Here’s how the Message paraphrase puts it… 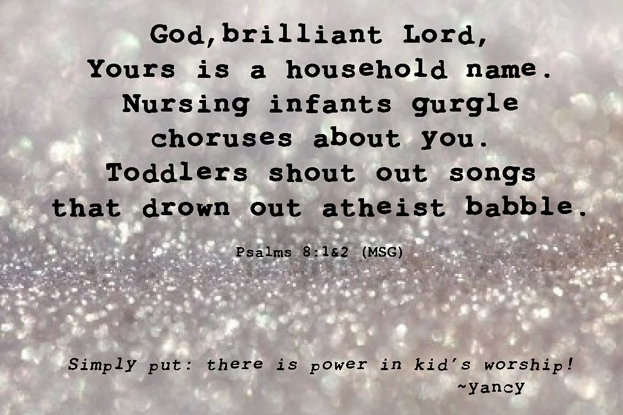 Praise from a child’s mouth has power!

After reading Jesus’ words and then going back and reading the whole triumphal entry on a donkey, I see it in a different light. It is as if there is spiritual warfare going on. Kids are leading this pep rally for Jesus and even strongholds in the temple are being torn down!

I believe that when kids are given the freedom to worship, it will silence the enemy in their lives. I think as parents and pastors, when we facilitate a time of praise to God with our children, we’ll see power grow in their lives.

I’m not trying to inflate the Scripture’s meaning. I just think God loves kids and has woven them into His plans and purposes–to serve Him as children and every day of their lives. What a privilege to lead kids (my own kids and the kids at church) to Jesus! I want every week I’m singing in our large group environment at church to be a triumphal entry. I want the kids to see Jesus ushered in and be a part of a ruckus for him: “Je-SUS! Hosanna!”

What do you think? Have you seen the power of kids’ worship?

Speaking of worship, did you see Yancy’s new album, Jesus Music Box is out? Free shipping with code YANCYLOVESME.