Friday afternoon I arrived in New York City for the Operation Christmas Child Shoe Box Blitz! After a load of taxis brought us to our hotel, we had a quick lunch at Whym (Holy Yum at the Bacon Macaroni & Cheese!) with some OCC staff, then the bloggers (well, Jenny, Jessica, Madonna and I) did a little sight-seeing! We went to St. John’s Cathedral which is the largest cathedral in the world! Jessica is an art-history guru while Jenny was our tour-guide. So, I kinda just followed them around and listened!

That night there was a meeting with the almost 100 volunteers that drove and flew in from around the country. But first we had to make our shoeboxes! We cut head and arm holes, added stickers and even added jingle bells! Here’s my gorgeous roommate, Jessica from Muthering Heights making her box! 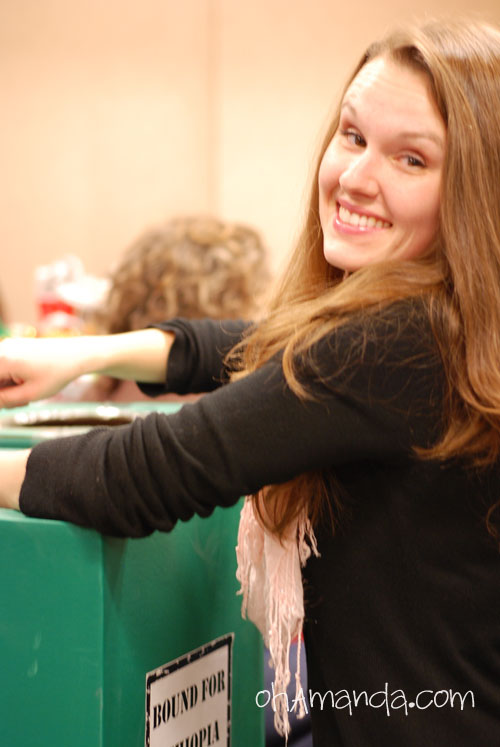 And Jenny, Madonna and Clair putting the finishing touches on theirs… 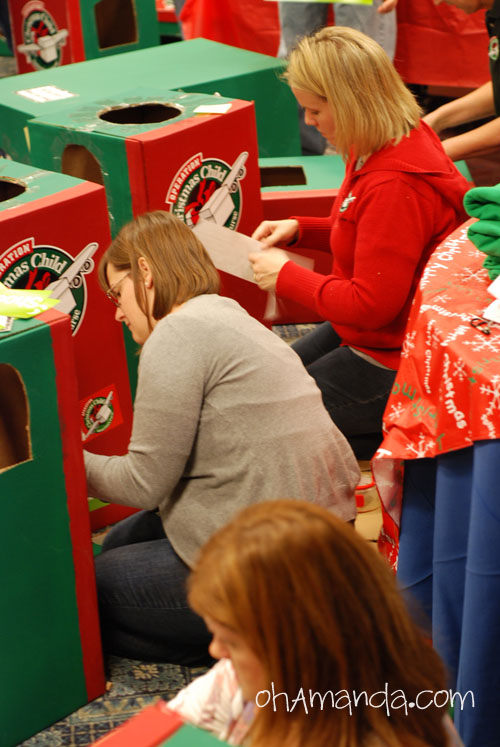 There were so many people in the room, all excited and buzzing about the big Shoebox Blitz the next day. We heard from several Operation Shoebox folks and they laid out all the details of the next day. From a social media standpoint, I was very impressed with their plan. They researched every single detail—from permits to parade regulations. They were covering everything from flickr to youtube, from twitter to facebook. (Check out the Shoebox Blitz website to see more!)

The next morning, about 10 of us (walking in groups of 4 to not be considered a parade) walked to Rockefeller Center to stand out in the plaza for the Today Show! Here’s Clair from Mummy Deals showing how excited we were: 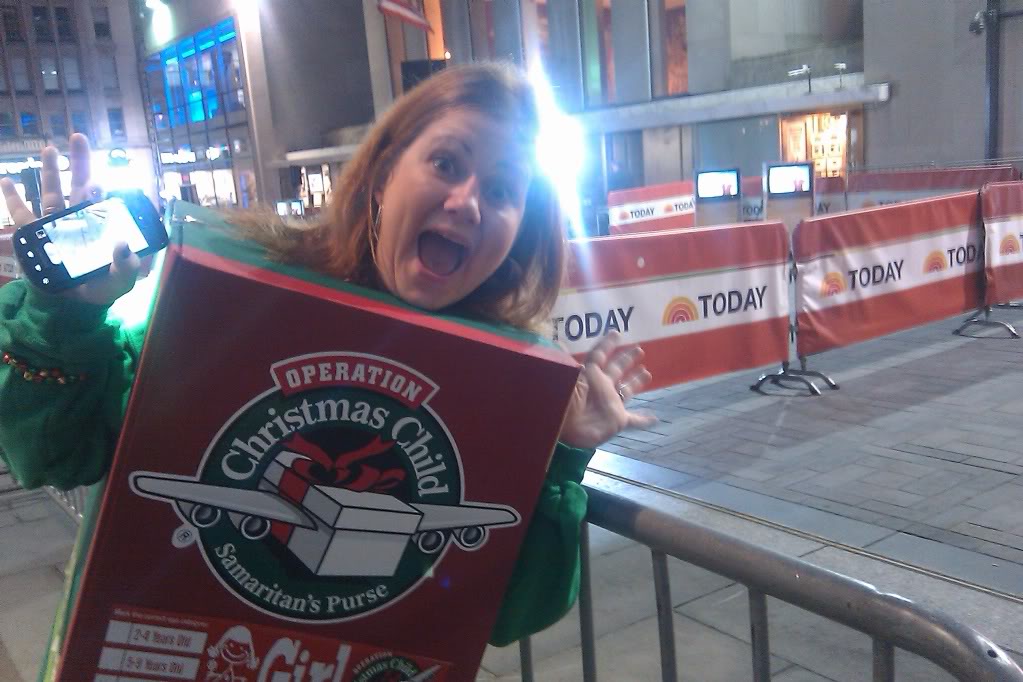 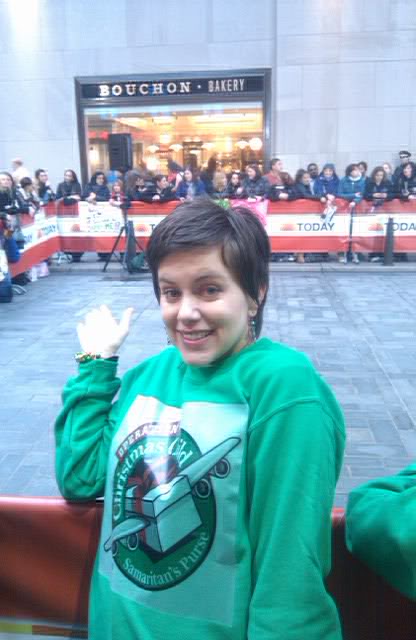 Of course, we weren’t screaming even remotely as loud as the girls who had been camping out since the day before to see Rob Pattinson (aka Twilight’s Edward).  Anyway, Al Roeker finally came out and talked to Livia for a few minutes. (Click her name to hear her story. AWESOME.) And then I finally got my TV time. Well, the top of my head and my arms did. If you watch Ann Curry’s interview with Rob Pattinson, any time there is a headshot of Rob, you’ll see me by his ear. Yup.

After my 15 seconds of fame, I headed off with the camera crew and some other volunteers to make a Shoebox Dance video. Which you can watch here. Because it is awesome:

Maybe you noticed I wasn’t in the video. Apparently my shoebox-dancing skills didn’t cut it. To quote my husband (mis)quoting Larry the Cucumber, “Pobre Amanda, she can’t dance.” Oh, well.

The rest of the afternoon was spent walking around New York City as a shoebox. We passed Trump Tower, Carnegie Hall and Grand Central Station. Also a Miss Piggy poster.

We didn’t stop people or hand out brochures. We basically just walked around and took pictures in front of famous places. We were just trying to create buzz. It was fun! Later in the day, Jenny and I created our own buzz when we went shopping around Grand Central Station as boxes. Well, we only bought these mini-cupcakes. But. Hello. Cupcakes. Just imagine trying to get your wallet out while wearing a giant shoebox.

And our day wasn’t done yet! After a quick break in the hotel, we headed out to a giant Shoebox Packing Party at Madison Square Garden! People from all over New York City came to pack shoeboxes for kids around the world! I mainly packed purple boxes… 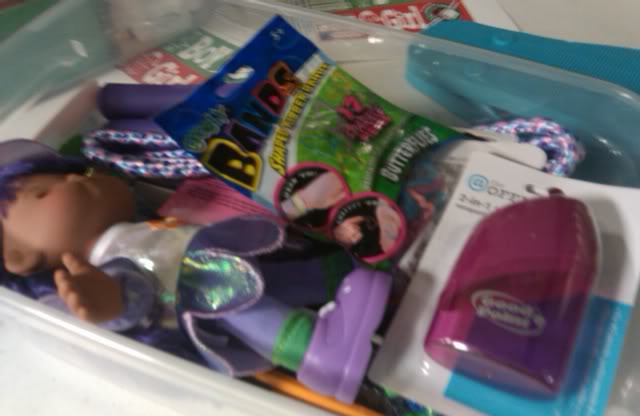 And even with a little tweet break by the bloggers (Jenny, Claire, Jessica & Madonna) over 4200 boxes were packed that night!

Can you believe that was all one day?! It was such an amazing experience. Honestly, it may have been one of the most exciting things I’ve ever done. It felt like a cross between an episode of The Apprentice and Improv Everywhere. I was so impressed with the organization of the Blitz. And even more, the passion behind it. Everyone at Operation Christmas Child (and all the volunteers I talked to) really see each box as a child. All this craziness of New York City was just so more kids would receive love this Christmas and eventually know the never-stopping-never-giving-up-unbreaking-always-and-forever love of Jesus.

If you haven’t packed a shoebox yet, just find an old shoebox, head over to the Dollar Store or Target’s Dollar Spot and pick out a gift for a child. You’ll be sending love in a box!

I am a member of the 2011 Operation Christmas Child Blogger Panel and write about the ministry on a volunteer basis.  All posts are my own thoughts and do not necessarily reflect the views of Samaritan’s Purse.  As part of the blogger panel, Operation Christmas child covered my expenses to participate in trip to New York for a social media campaign.  I am not an employee, agent, or contractor of Samaritan’s Purse.