With Christmas and Lydia’s birthday just days a part we have a few new books lying around the house. I’ve enjoyed reading these new books and “getting to know them”! So, I thought I’d share them with you today! 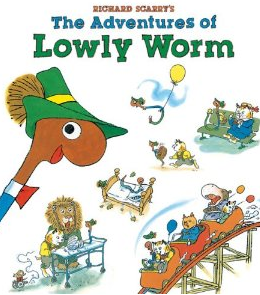 If you can believe it, this is our first Richard Scarry book! I don’t know how that happened. As I was looking through the bookstore I found this one and knew Asa would love it because poor Lowly worm breaks his leg (do worms have legs?) and has to get a cast. Asa had a cast this summer and can spot them a mile away!

So far I really like it because of the family element. Everyone is polite to the parents, calling adults Mr. and Mrs., asking for permission and things like that. And I love the multitude of pictures on every page!

Snug as a Bug

I found this one for $1 at one of those clearance-outlet type bookstores. I’m so glad I did! This one is an adorable rhyme about a mom who asks his son if he’d like to sleep like all different animals–in the mud, in the ocean, in a tree, etc. He finally says, “I want to sleep in a bed!” They pray at the end and thank God for making the little boy unique. We love this one! 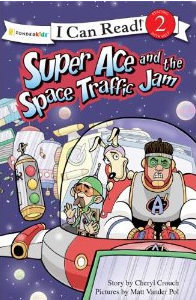 I got this one because we call Asa “Ace” all the time. And it’s such a boy book, I couldn’t pass it up. But I’m not loving it. It’s about a bumbling Super Hero (Ace) who tries to stop a traffic jam in his own power. His geeky sidekick ends up fixing it. And supposedly it’s because of God’s wisdom. I don’t know. I thought it was a stretch. I’m not discounting it. Asa may love it when he’s a little bigger. It was just ok. 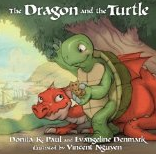 And how could I forget about The Turtle and the Frog? Our new favorite! {Click to see our fun crafts and activities with this book!}

I’ve already told you about my love for this book. We read “O” last night. It was for “obey”. Yup. You’re gonna wanna buy that one. We’ll be starting our big unit on this one next week with the letter A!

The Princess and the Pea

I adore Lauren Child’s art and found this book for Lydia about a year ago on clearance. It’s a fall-in-love-with-the-handsome-prince Princess story. So, it’s not one we’re going to read in heavy doses. What’s funny is that for some unknown reason, Asa found another version of Princess and the Pea in one of his bedtime storybooks and I read it the other night. It was so horrible and superficial that it made Lauren Child’s version seem positively empowering!

Lydia has really fallen in love with Madeline. And she’s always loved audio books. So, I got her this one. Now I’m kind of regretting it because I realized we already have 2 copies of it. And we don’t have any copies of The Gardener or the Journey. And those are the BEST audio books ever!

And her birthday books…

I had to get this one because it’s her Golden Birthday (5 on the 5th!) and we had a Tangled party!

This book is gorgeous! It’s a poem of all the things Rapunzel can do with her hair. The illustrations are what really  make it though–they are more whimsical than the movie and kind of water-color-ish. The illustrator is the granddaughter of Bill Keene who did Family Circus!

We used this book as an guest book at her birthday party. I love seeing all the well-wishes and autographs of our friends and family! 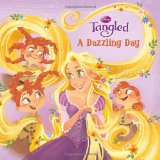 Another Tangled book…What? We had a Tangled party! I couldn’t resist!

And these two books I found on clearance at Christmastime…

We have really been experiencing this one since we’ve had 6 inches of snow and ice for the past 4 days! Our favorite snow activity so far is not sledding or snowmen, it’s been spray painting the snow with water and food coloring! 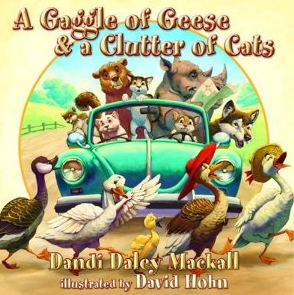 A Gaggle of Geese and a Clutter of Cats

This is written by one of my faves–Dandi Daley Mackall. It’s a hilarious poem about all the words used to describe a group of animals. But the illustrations are puns on the words–so the litter of kitties? Cats sitting on a litter like an Egyptian princess! The funniest one is the pod of dolphins listening to an iPod and the gang of deer with their gold chains and sunglasses on!

So, what books did your kids get for Christmas? Which ones are you enjoying now?