You are here: Home / me / The Walls of Jericho

For a while I’ve wanted to start a mini post on Sunday called, “What did you learn at church today?” And just feature whatever my kids did at church. It’s always hilarious (and sometimes frustrating) to listen to what the Bible story was and what their macaroni craft had to do with it.

The month of October at our church has been a SUPER HERO theme! We’ve had special tshirts, cardboard cut outs of our super kids and balloons everywhere! This week’s Bible Super Hero was Joshua. They made little horns out of paper, learned Deuteronomy 31:6 and played a memory verse game that included stacking bricks in order. We’ve been singing songs like, “My God is So Big!” and “Hosanna!”

Today I decided to take our story from church and bring it home. I grabbed all our shoeboxes (I save them just thinking I’ll need them one day!) and let the kids stack them up as high as they could go. Then we marched around them 7 times. Then we silently  marched 6 more times. And the very last time we grabbed our kazoos and yelled and shouted while we knocked the tower down!

I wish I could describe how incredibly fun it was. The kids did it at least 5 more times. Each time they shouted louder and longer. Each time they danced and yelled, “Thank you, God!” Asa’s little legs were kicking up in the air, Lydia was dancing around and I believe their little hearts were discovering the awesome power of God! 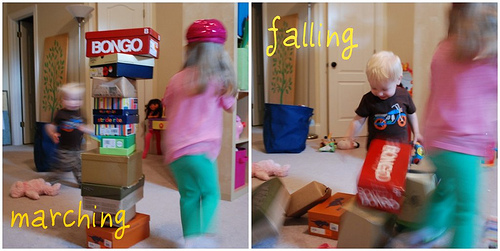 I took about 400 pictures and then realized there was no card in my camera. Really?! After I secured my memory card, I tried again. But they were moving too fast. But at least you can see how much fun they were having!

by Sally Lloyd Jones, of course. I loved this story because it talks about how even after this big miracle, the people didn’t continue to obey God. And that’s why Jesus came, to be our true leader and take us to a forever promised land. 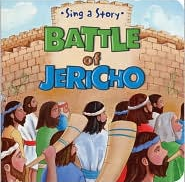 We also read one of my favorite board books, Battle of Jericho

. It’s a short story read and sung to the tune of The Farmer in the Dell. It’s one in a series of sing-a-story books.

and a portion of a Donut Man show where they sing and act out the story of Jericho. It’s been a fun day–the kids have heard the story, watched it, sung it, and experienced it! Now, I hope they never forget it!