You are here: Home / party / How To Throw The Coolest Muppet Type Puppet Birthday Party

Welcome to the Puppet Party! Oh, I know I say this with every birthday party but: THIS WAS SO FUN! I wanted a funky, kooky Muppety, Fraggle-Rock-ish feel to Lydia’s 4th birthday party. And it was just perfect! It was loud, colorful and felt like a carnival! Wanna know how it went down?

The decor was easy on this one. I happen to own a real live puppet stage. So, that was front and center. And to go with those puppet stages were several very adorable puppets. I went with an orange-teal-purple-ish kinda of color scheme so I filled in the blanks with balloons in those colors. 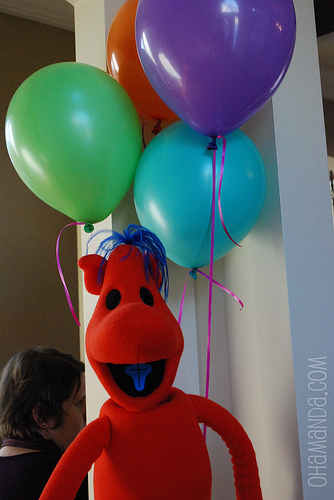 With the enormous television we now own in our living room, it was the perfect decoration when I played the original Muppet Show

Apparently I am a carnivore because all the food was all meat. Unless of course, it was refined sugar covered in refined sugar. Oh well, we do this but once a year right? But at least I was creative with the titles…

But the cupcakes really take the cake. (Heh.) I loved the idea of Muppet cupcakes but didn’t want to end up with an Elmo birthday or a Cookie Monster birthday. So, my bff Staci (who has made all of Lydia’s cakes–Snowflake and Snow White) knew just what to do. She made Muppet-inspired cupcakes! 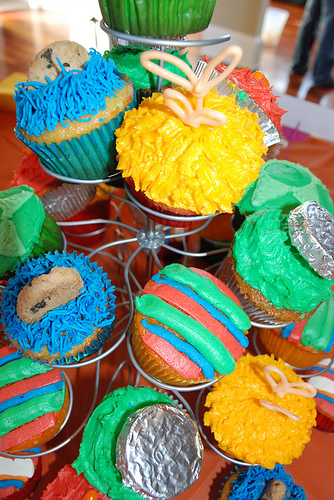 Visit Simply Staci to see which puppet inspired each cupcake. Aren’t they awesome? They were so perfect!! Thanks, Stace!

What’s a 4 year old birthday party without crafts? And what’s a puppet party without puppet crafts? Our first craft was a complete rip off from the Center for Puppetry Arts‘ Make-a-Puppet Workshop—a moving arm rod puppet from poster board and construction paper. It was a little more high-tech than I realized and the kids really needed their parents to help. But gosh, they turned out cute! 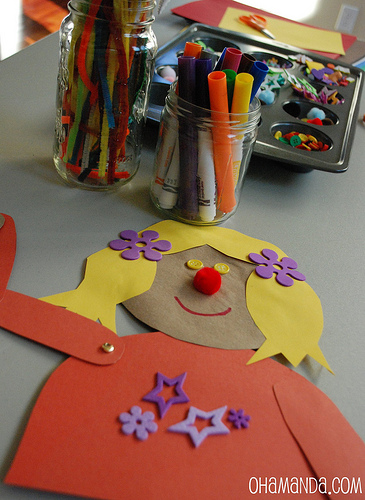 I also utilized my new favorite table: the brown paper masking-taped to the floor. Cool, right? 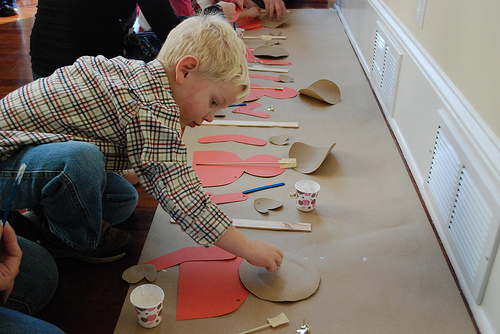 Our second craft was the old brown paper bag puppet. I found a cute template from the craft store (but there are TONS online).  It was a little time consuming to cut all the pieces out (especially FOUR legs for the frog?!) but they turned out adorable! One reason they were especially cute was because I used craft foam instead of construction paper. I think they would have been super cute with felt, too. 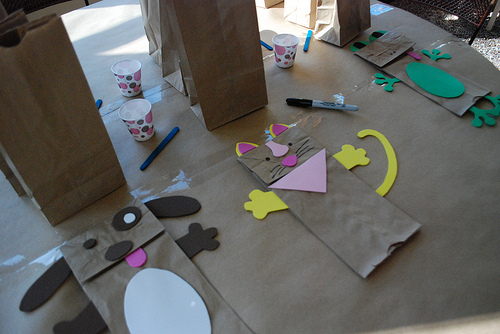 If that wasn’t enough (it wasn’t!) we had our very own puppet show with special guest, Vicki! I haven’t done Vicki in quite some time so I was actually kind of nervous. But as Vicki usually does (and I know this is the freakiest thing ever), she surprised me and was exceptionally funny! 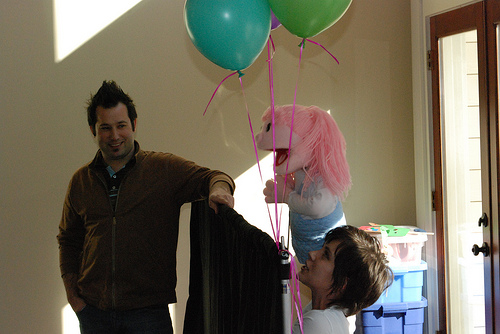 She sang Happy Birthday to herself (which is always lovely), sang “you look like a monkey” to Mr. Les and then pretended to not know who the real birthday girl was. Finally, she led everyone in singing Happy Birthday while Lydia’s cupcake was delivered on her purple birthday plate. I wasn’t sure if Lydia would be timid during a show devoted to herself but she LOVED it. 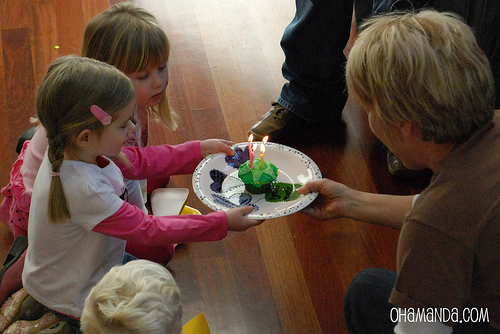 And so did the rest of the kids. Look at their faces! Priceless. 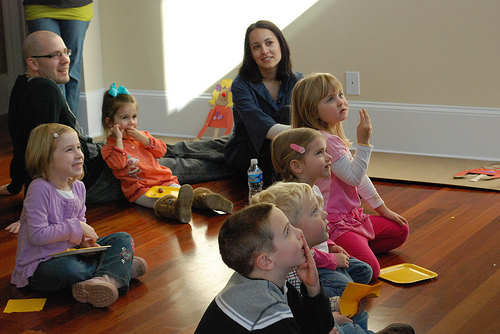 Then we let the kids do their own puppet show. Oh, I wish we had it on video. It was quite hilarious. And they absolutely thought they were famous! 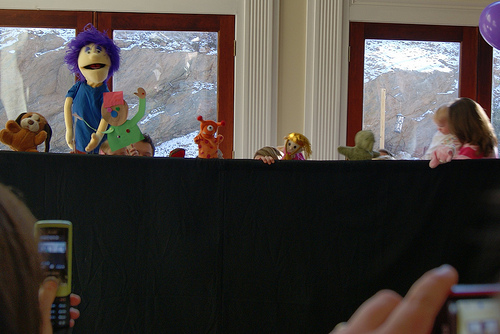 Of course, there were presents. I really hate opening presents in front of people because it seems to take forever. And for little kids, I would think it’s a little jealous-inducing. But everyone was sweet and watched Lydia meticulously open each present. And the gifts were so wonderful. Very little plastic and lots of things that were so VERY Lydia. I was honored by their thoughtfulness. 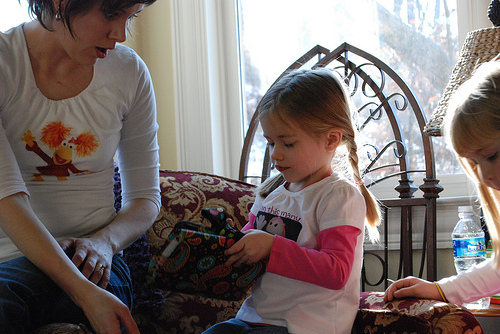 And as far as OUR presents…well, we tied a little Ikea finger puppet to an oversized sucker, Lydia wrote an “L” and a smiley face on a card and we had a cute gift sans good bag! Plus, the kids were taking home 2 big puppet crafts! 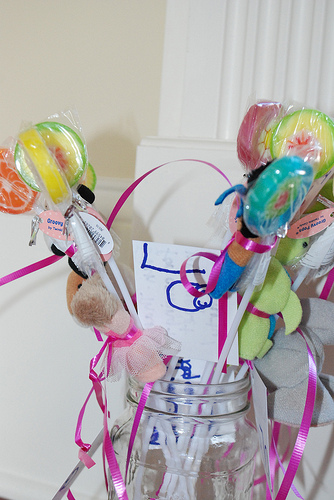 Thanks to our family and friends for loving and blessing Lydia! And Happy Happy Birthday to my sweet sweet girl!

❮ ❮ Back into the swing of things
Top Ten {Tuesday}: Things To Do When You Have Bloggy Writer’s Block ❯ ❯