You are here: Home / disney / GUEST POST: Top Three Disney World Tips by Emily of Mommin’ It Up 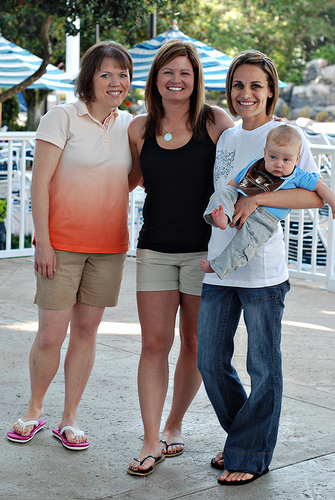 Emily from Mommin It Up, Andrea from Mommy Snacks, Christine from Dates to Diapers and Asa! Magical Moms Trip. 2009.

Hello Oh Amanda readers! I’m Emily, and I blog at Mommin’ It Up. I had the pleasure of being a “Magical Mom” along with Amanda last May, and since she’s back at the Mouse House this week, she’s asked me to guest post. I looooove to talk Disney, so I happily obliged! I’d like to share with you a few things I’ve discovered about Walt Disney World… specifically three services available in the park that I think are underutilized, but can have a great impact on the level of enjoyment (and sanity!) when you visit.

First of all, FastPasses. Simply put, use FastPasses, and use them wisely! FastPasses are offered on Disney’s most popular attractions, and they basically allow you to get a reservation to ride a ride. When you put your park ticket into the kiosk, it prints a ticket with an hour-long time frame in which you can come back and go through the FastPass line, which is generally much shorter than the stand-by line. FastPasses are a huge time-saver. All of the parks were quite crowded when my family visited in August, but thanks to the FastPass option, we didn’t stand in line for anything with a posted wait time more than 30 minutes. FastPasses are free with park admission and there’s no limit to the number of them you can get in a day, but you can only have one at a time. So, if I got a FastPass for Big Thunder Mountain Railroad that had a time frame of 12:40-1:40, I’d have to wait until 12:40 before I could get a FastPass for Splash Mountain. But let’s say I had a lunch reservation at 12:50 and didn’t have time to ride Big Thunder Mountain beforehand. At 12:40, I could still grab a FastPass for Splash Mountain, even though I hadn’t used the one for Big Thunder Mountain, because it was after 12:40. Make sense? Probably not. Maybe Amanda can explain it to you. Another tip – they rarely enforce the end time on your FastPass, so don’t worry if your time frame conflicts with a dinner reservation – you can use your FastPass after the printed time, just not before it.

Disney is all about families, right? Of course! They know most visitors will be traveling with people of various ages, and they don’t want anyone to miss out on the fun. So, they instituted a very helpful but little-known service called the Rider Switch. The Rider Switch (also known as the Baby Swap) allows parents traveling with small children to take turns on rides without having to stand in line twice. For rides that have a minimum height requirement, one parent waits in line (or even better, uses a FastPass) while the other stays with the baby, and then when that parent exits the ride, the second parent can use a special Rider Switch pass to go through the FastPass line. The Rider Switch pass allows the second parent to bring up to three other kids with him or her, so this means the older kids totally make out – my daughter Kate got to ride every ride twice in a row! This is a great feature and one that really allowed us to get the most out of our time at the parks. To get a Rider Switch pass, just go up to the cast member who is working the FastPass entrance and ask for one – but make sure you have both parents and the baby with you, as they have to verify that you actually do have a baby with you! Once, not knowing this rule, Kate and I tried to get a Rider Switch pass for her dad to use while he was in the restroom changing the baby’s diaper. The cast member was very nice but said she had to see the baby, so make sure to keep your party together! There’s a video here that also describes the Rider Switch – look for it on page four of the videos. (Just think – Amanda is going to be starring in videos just like that before long! Then we can all sigh and say we knew her when.)

Finally, perhaps the most underutilized place in all of Walt Disney World… The Baby Care Centers! Amanda and I got to tour the Center at the Magic Kingdom when we were there in May, and my family and I definitely took advantage of them on our trip. Each park has a center, and they contain huge (and very clean!) padded changing tables, restrooms, high chairs, nursing rooms and play areas, and you can buy any kind of baby item you might need, from formula and baby food to medicine to clean clothes. We used the centers in both the Magic Kingdom and Epcot, and they were so nice, cool and clean. It made cleaning up my son Sam so much easier than trying to do it in a regular restroom! One evening, Sam was hot, tired, and fussy, so we took him into the Baby Care Center to change his clothes. He was so happy to be out of his stroller that we decided just to let him and Kate play in there for a while – they played with toys, books and watched a little bit of “The Little Mermaid” and it was just the downtime that they both needed. It also happened to start raining while we were in there, and it was the perfect place to wait out the storm. The Baby Care Centers are definitely a must-see attraction for families with small children!

So there you have it – the top three ways I’ve discovered to make a WDW vacation even more magical. I can’t wait to hear the insider tips Amanda will have to share when she gets back!

Don’t you love her? Please leave the fabulous Emily a comment, visit her blog and follow her on twitter! She is truly magical! Thank you, Emily!