Sometimes you need a craft that is also a stay-at-the-table-and-don’t-run-around-the-house activity. This is one of those… 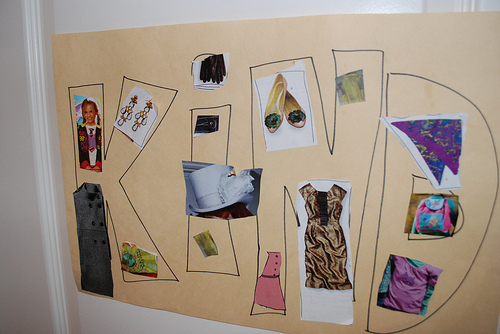 Basically, I wrote the word KIND on a giant piece of newsprint. (I pride myself on writing fonts by hand but this is not one of my best examples.) Then I gave Lydia a STACK of old magazines, a pair of scissors and a glue stick. I had her look through the magazines until she found a picture of clothes.

Then she could cut out the clothes and glue it on the word KIND. Remember our verse says we should put on KINDNESS as if it were our CLOTHES. So, here we are putting CLOTHES on the word KIND. A little backwards but I think it reiterated the point!

My tips & thoughts:
1. This thing actually took us 2 different days! It’s very time consuming because she really looked through the magazines for the clothes she liked best! (Maybe it’s a girl thing?!)

3. We got to talk about how all the clothes got “put on”. The gloves go on the hand, the buttoning of the pants, the hat on the head, the dress versus the shirt. It was a good conversation starter for “putting on” kindness.

4. Use a good pair of scissors. I have these random plastic things that I discovered in my craft stuff. I am officially throwing them away and buying a real pair of scissors. They could not cut magazine paper without chewing the edges!

5. We hung her KIND SIGN on the front of her closet door. She thought this was so smart. Now every day she stands next to it to admire it. And she usually says, “I like my sign!” or something equally profound. Unfortunately, it kinda reminded me of the day when she’s 14 and pulling pictures out of magazines and taping them to her walls…