You are here: Home / me / YOUR TURN: Setting the Stage for Success 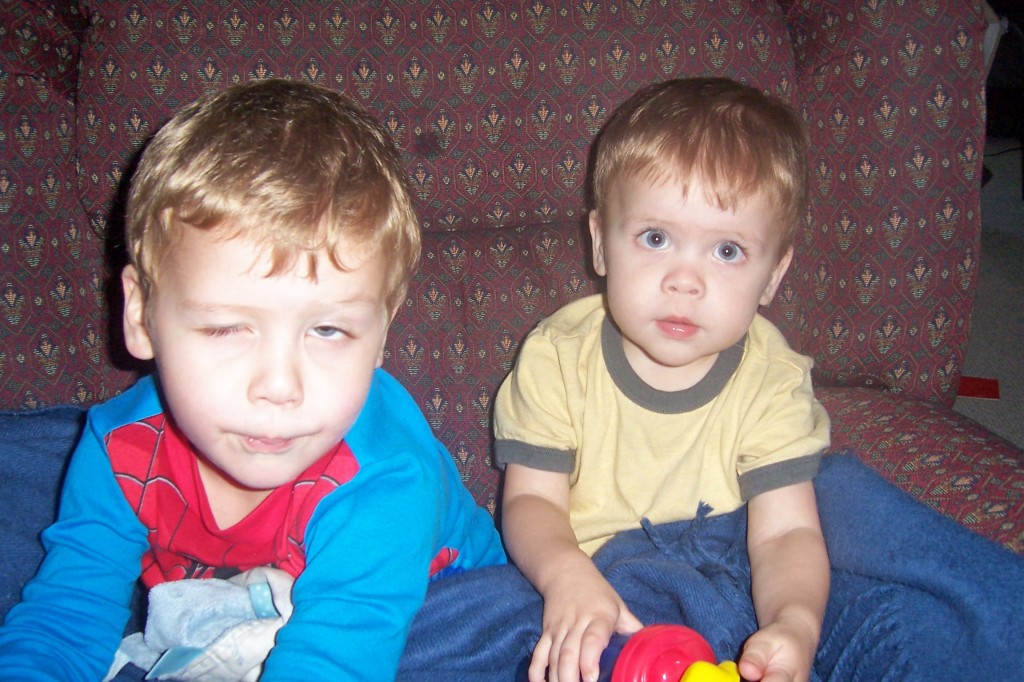 Josh and I are taking a parenting class this fall – a class where, surprisingly, we have one of the oldest kids of anyone in the class.  (We’re so far behind…)

One of the couples with a 16 month old asked if they were too early to start giving “time warnings” – as in, “Hey, little man, we’re going to leave in 5 minutes.”  The leaders of the class let us chime in with our experience – we started giving Elias minute warnings probably when he was about a year old (starting with the warning that bathtime was ending in one minute).  I really think that has saved us 3 years of crying fits…

I started noticing that we still do it.  It’s a part of our routine – we always give a heads up when we’re going to be walking out the door, or changing activities for any reason. We expect a response – Elias says, “OK, Mommy,” and Donovan says, “HMMMMOMMA!”  That response means that they’ve heard the warning, and that they will be ready to go when the time comes.

I’ve been watchful of the responses – I don’t want them to become automatic without really acknowledging that they’ve heard us – and so far, they have been real responses.  Because when I get a response that they heard me, we don’t have any fits or complaining about leaving.  They knew it was coming, and they were ready (unlike the picture at the top.  Apparently Momma forgot to countdown…).

This past Sunday, I took this a step further.  We have a challenging “church routine” for any toddler/preschooler – Sunday School classes start after the prayer and worship time, and the prayer and worship time typically lasts an hour.  That’s a long time for the little ones to sit still.  There are many families where we meet that have success in keeping their kids calm and quiet – and I know they started training them early.

But when Elias was at the age to be trained to sit and be quiet, I was pregnant with Donovan and I could not sit on the hard chairs that are in the main room.  So I moved with Elias out into another room with the cushy-ultra-comfy couches.  His prime training time was spent playing rather loudly at my feet… and now I move us out to that room to keep the rowdy boys from interrupting others’ worship time (Josh plays guitar during the worship time, and that is why he is not able to help me train the boys in this way).

Elias has come to think that when we are in the prayer and worship time, it is a time that is to be borne with much reluctance on his part.  Some of his best friends are also “sequestered” in the other room, so when we head out of the main room (with me in defeat), he is able to play with his buds.

So Sunday, before we left the house, I told Elias that today was going to be different. That I expected him to play quietly in the prayer and worship time without asking repeatedly to leave.  In fact, if he asked at all, he would be punished.  He looked at me and, without arguing, said, “OK, Momma.”  And he did it. We lasted about 30 minutes in the main room before Donovan got too loud, but Elias did not ask me to leave even one time.

So I learned that giving a heads up was not only a great way to prepare little ones for change, but also a great way to set expectations.  And instead of having to deal with his behavior in the heat of the moment, I was able to relax, knowing that Elias knew my expectations for his behavior, and contemplate how I was going to train the little guy that was squirming in my arms…

Now it’s YOUR TURN: How do you set yourself and your kids up for success in their behavior?  Do you have any “tricks” that work for your family in your experience?