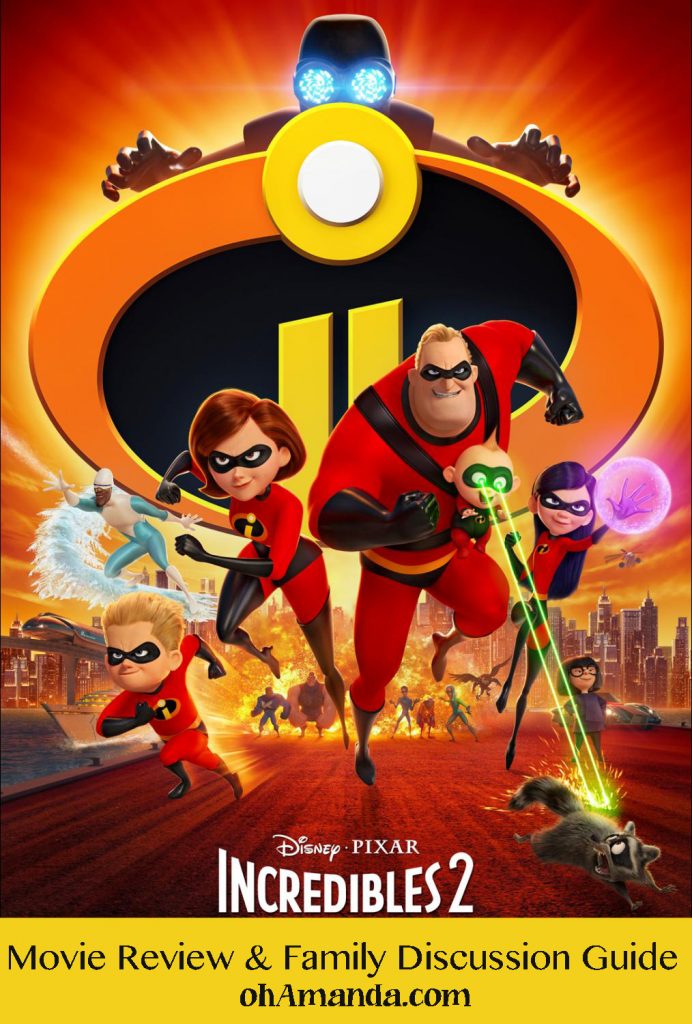 I can’t believe it’s literally been 14 years since the first Incredibles movie came out. That means my kids weren’t even alive when it released! What?! How old am I??

Anywhoo, we piled into the reclining red chairs to see Incredibles 2 on Father’s Day and we super loved it. (Super. Ahem.)

There are definitely a few things to talk about–specifically depending on the ages of your kids. Let’s get to it, shall we?

WHY YOU WILL WANT TO SEE INCREDIBLES 2

Super heroes are cool. I mean, honestly. The gadgets, the powers, the costumes! It’s just so fun.

Parent and kid interaction. Just as with the first movie, this story is all about family. About a traditional mom and dad raising their three kiddos the best they can. And even better? They all love each other and want to support each other! I think this was one of the biggest themes–all of them learning how to put each other first.

Talk about it: Why did Violet decide at the end to take care of Jack Jack? She realized she was the best one to do it–even if it meant not being in the big exciting fight. Read Philippians 2:3. How did each of the Incredibles consider the others more important? (Bob let Helen be the hero first. Violet took care of Jack Jack. They all learned to help Jack Jack. Bob trying to fix the relationship with Violet and the boy-friend. Etc.)

Husband and wife interaction. OK. I have some stuff to say about this. When I saw the previews I was a little disappointed because it looked like Mr. Incredible was about to be the Incredibly Awful dad while Mom was off saving the world AND taking care of the kids.

Can I be honest? I GET SO TIRED OF THIS BRAND OF FEMINISM.

Honestly, I think it’s hypocritical and panders to women. Men are not losers. Stop telling my son he can’t be a strong man, a good dad and a hard-worker! Blah. Let’s get back to Bob and Helen…

In the movie, Mr. Incredible does have a bit of a hard time at first with the kids and home. Then he shakes it off and says, “I’m not a substitute parent!” And begins to ROCK at being a PARENT. Not at being Disneyland Dad or some Faux Mom, but at a DAD who is USUALLY AT THE OFFICE ALL DAY/SAVING THE WORLD AND SUDDENLY JUST HAS A NEW JOB OF BEING AT HOME ALL DAY. (Goodness, he made waffles for them! When was the last time I did that?)

In the end, all FIVE of the Incredibles save the day. Bob tells Helen to get the villain at the end. He recognized her super skills were what was needed. And when they are all in a happy, exhausted pile at the end? What’s the first thing out of Helen’s mouth? Nothing about fighting crime with super powers. It was about her family.

Gender stereotypes are there for a reason, y’all. God gave women and men distinct giftings…powers, if you will. It doesn’t mean women can’t do as meaningful or as much as men can do. Or vice versa. It just means we’re all gifted to do certain things by God! And those gifts all fit together to form a beautiful team–a BODY to do more than you could do alone.

Talk about it: Read 1 Corinthians 12 or Romans 12 and talk about the gifts (the super powers) each of your family members have. Think about how you can and do work together to do more.

Scariness. I mean, the Bad Guy was kinda creepy. He was the ScreenSlaver (which, is actually pretty accurate and apropos for our culture) but he looked weird and had all this screen-hypnosis stuff going on. There was a lot of fighting, stopping giant vehicles from crashing into innocent cities and even more fighting. I don’t think it’s as intense as a Marvel Super Hero movie, but minute for minute? It probably has as much fighting.

Language. There was one use of “damn” and “hell” by an adult. (So, not an imitative phrase by a kid or done with humor.) I don’t know why. It was so weird. Plus, lots of harsher/crass phrases like “What the–?” and “sucks” and “ohmygod”.

Drinking. There was a lot of drinking and conversation about drinking. Maybe this (and the language) was to juxtapose the jet-setting life of the grown up super hero world with the at-home life of a parent and family? Still. Not cool.

Boyfriend/Girlfriend Stuff. Violet is supposed to go on a date with a boy she met in the last movie. Remember? I don’t know how old Violet is supposed to be but maybe a little young for a date? Regardless, there was a lot made of her crying over the boy and wanting to go on the date. BUT. I could add this to the top section because I liked the way the family handled Violet’s date (in the end…well, I don’t want to spoil it but the family takes precedence over the date in many ways). Plus, Bob and Violet’s conversation about the date ended with a father-daughter moment, NOT a boyfriend-girlfriend moment.

Talk about it: When/how should boyfriends/girlfriends interact and be a part of your family?

Bao. The short before the movie was called Bao and shows a Chinese mama making dumplings, one of which turns into a little boy who she treats as a child. (I thought it was going to be the Chinese version of The Gingerbread Man.) She coddles and protects the little dumpling as he continues to grow and he eventually wants to move out of her house (to her horror!) so she…well, she does something to him. And it was kinda shocking. 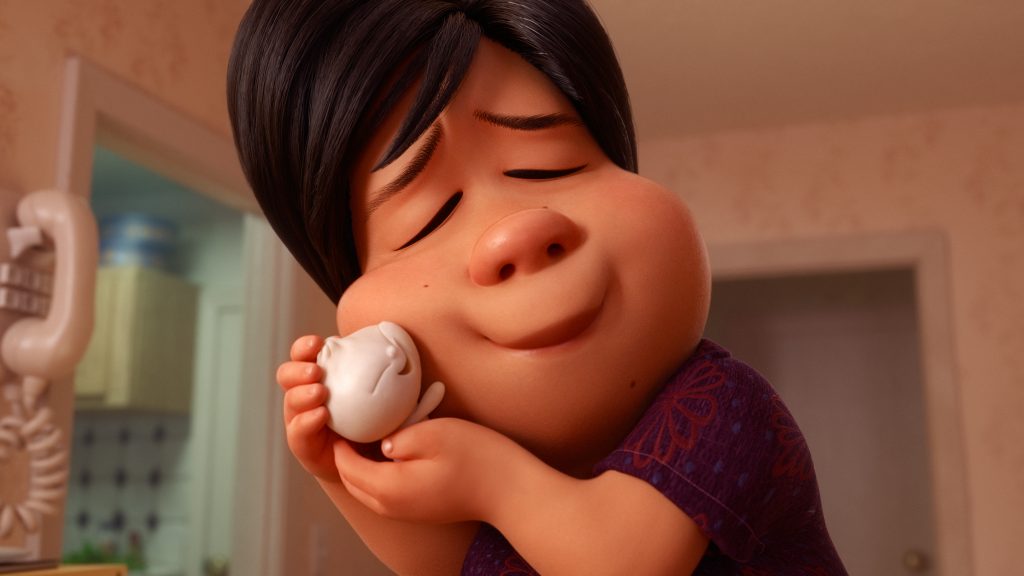 We honestly forgot to talk about the short (or even mention it) after The Incredibles but, it was conversation worthy. Why would the mom do that? What did it mean? Who was the dumpling? Why was she sad? What was a better choice? How did the son and dad help?

Talk about it amongst yourself parents: What’s your goal as a parent? To keep your dumpling close? Or parent them to become strong men and women of God living for Him on their own?

Wreck It Ralph 2 Preview. This is old news but the new Wreck It Ralph movie is coming out at Thanksgiving this year. I did not really like the first Wreck It Ralph so I wasn’t prepared to like this version either–especially when I found it out it was called “Ralph Breaks the Internet”. Talk about a movie that will NOT be timeless. You may have seen the Princess trailer for this movie? In it, all the Disney princesses are interrogating Vanellope about being a Princess. They finally ask, “Do people assume all your problems got solved because a big strong man showed up?” and when she says YES, they cry, “She is a princess!”

OK. More gender stuff that gets on my nerves. I get it. I do. I understand the whole Girl Power, Dream Big Princess, blah blah. But that is the story. That is exactly what happens in Snow White. A man did show up and save the day. It just IS what happened. Sigh. There’s too much to say for this little paragraph.

Can I just be super-spiritual for a minute? I told Lydia after watching that clip, “Don’t ever be ashamed if a man ever rescues you. Jesus rescued us all from sin and death. And every fairy tale, princess/prince movie is just a glimmer of what He did for us.” (And I didn’t say it in a la-dee-dah Snow White voice either. I said it in the Grrrl-Z-Snap kinda voice. OK?!)

I thought it was a great movie. The family togetherness and interaction were worth any violence, scariness and language for my 9 and 12 year old.

I think, possibly, if your kids are young, easily frightened or you are very concerned about the language (more the imitative language, not the actual cuss words) it might not be for you. Or maybe, it might be one of the movies you watch at home, on a small screen, in the light of day with a remote close by.

Edna Mode said it best (to poor Bob after all of Jack Jack’s…growth spurts), “Done properly, parenting is a heroic act.” Heroic acts might be taking your kids to see this movie and talking about gender and stereotypes and dating and language and violence. Or it might be heroic of you to sit and home and play cards instead, waiting till your kids are older to watch this together. You know what you want your family to look like and become. Don’t let culture tell you what to think and do! Be heroic, parents!