[alternate title: A Gaggle of Games: A Gift Guide]

[and one more: Good Golly, I Love Games!]

It’s Christmas time. Some of you have already bought and wrapped all your gifts. Some of us, other people, are just waking up after Halloween and realizing we need to buy 311 presents this year. And on top of that, we’re wishing we didn’t have to buy one plastic, battery-filled toy for anyone on our list.

I am here to rescue all you other people.

We do 3 gifts on Christmas morning. At times, it’s hard. But I am firm in my belief that kids need less stuff and more time. More time outside, more time using their hands, more time with their parents, more time staring off into space, more time talking and wondering and straight up playing.

So. Instead of toys, I love giving games. Oh, games, how I love thee! We play games around here before bed, instead of movie-night and on vacations and trips. Games get us talking, help us use our brains, make memories and give us a common goal–to have fun together!

Here are a few of our recent faves:

My 10 year old is in love with this game. It’s from BlueOrange games who makes Spot It! (another absolute must own) and it feels similar to that but instead of trying to match pictures on cards, you look at pictures and try to match the items in your hand. So, there’s a tactile, hand-eye-coordination thing, too. 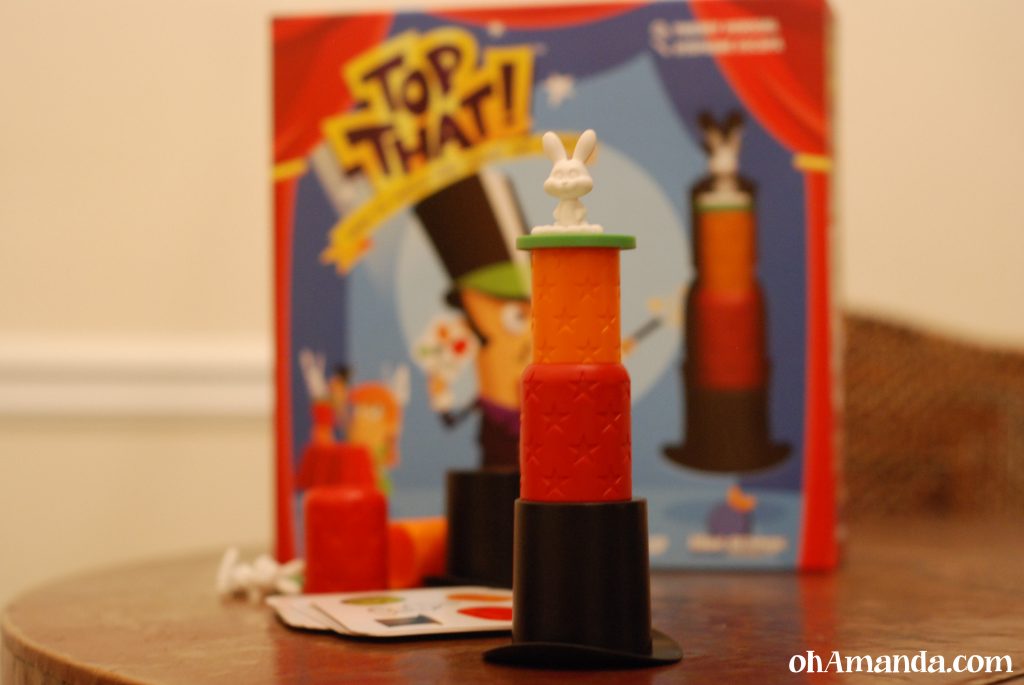 And since it’s magician-themed, we love it even more. It also makes me feel like I could do some close up slight of hand, too. Maybe.

A very similar game to this is Eureka! You have to mix molecules in beakers to match the cards. It’s a lot of hand eye coordination. And yes, my daughter beats all of us every single time.

This is a really cool game–it’s basically a memory game. There are nine cards and you have to make matches. The only problem is, whenever a match is made, new cards are put on the board. It really tests your memory!

Each match then gives you an extra special turn and then when you collect three of the same card, you get a big card thingie (I really can’t think of a better word). And once you get 3, you win! OK, that was a really brief and possibly confusing way to explain it, but the point is that it’s super creative!

Note: The theming of the game is personified elements. The back of the box says, “enter the Wizard’s Guild…one final lesson to master: summoning Gigamons…become the master of the Elemons!” Although there is nothing new-age-y, wizaard-y, pokemon-ish to do in the game, it has that vibe in the theming for sure. FYI if that bothers you.

This game has been around for awhile but it’s new to us and my kids love it. The judge puts down one card with an adjective on it. Then, everyone has cards with nouns on them. You choose one of your nouns that is best described by the adjective and try to talk the judge to pick yours as the best.

For example: The adjective was cheerful. My 8 year old put down CHEERLEADER. I put down GRAVY because obviously gravy makes every meal cheerful. I tried to persuade them that CHEERleaders and CHEERful had nothing to do with each other. They wouldn’t listen to me, if you can believe it. But we laughed for about ten minutes.

If your family likes strategy games this is the game for you! Players pick route cards and then try to match their trains to the route by buying color-coded train cars. It’s a long fun game. My 8 year old still needs some help with it but he likes it anyway.

And now some of our long-time favorites:

This is literally my favorite game. It is so creative, has super funny illustrations, a little bit of math thrown in and even young kids can play it. 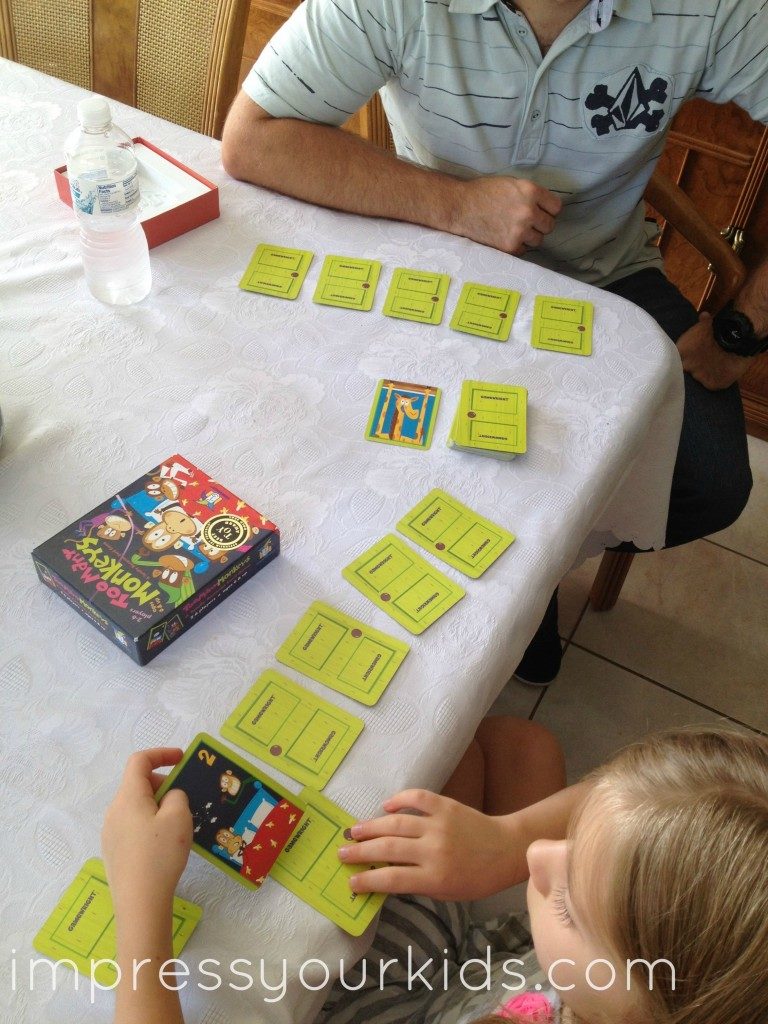 We love this game because it’s super easy–part luck of the draw and part strategy. It also has several rounds, so it’s a good one if you want to spend a lot of time together. My 8 year old beats us at it almost every time.

I love this game because it has two levels of play–the harder level for adults and an easier one for kids and families. It’s a poker-face kinda game where you can really stick the other players with lots of points if you’re brave enough to hold on! There is also a dice version of this!

This is my other favorite game. You collect…uhm…collections of sushi to earn the most points. The twist is that you trade hands every turn. There is also an expanded Party version AND a dice version. I want them BOTH!

Zeus on the Loose

If your kids need some math-facts help or are studying Greek mythology (or both!), then you need to get this one. It’s a counting game with the added bonus of a funny little Zeus figurine.

This is kinda like Sushi Go, but sweeter! Ha! I love this game so much–it’s the one I always pick when I get a chance.

I don’t know why I love dice so much. This is the easiest, most fun dice game. Basically you just throw the ten dice until you get all of them on the same number. And you have to do it before anyone else. There are also a bazillion alternative ways to play. Must own.

This year, I bought Trash Pandas and Abandon All Artichokes to put in my kids’ stockings. I cannot wait to try them out!

This post includes affiliate links. If you make a purchase through these links, I will receive a small percentage. It doesn’t change the price for you and helps support ohAmanda.com. BlueOrange games sent me 2 of these games to review. All thoughts/opinion/words my own.