You are here: Home / party / Asa’s How To Train Your Dragon Party

All last year Asa wanted to have a Spy Party. I was all set to do spy training for his little friends. Then. How To Train Your Dragon 2 and Dragon Week happened. And we had to have a Dragon/Viking party. So, here it is! 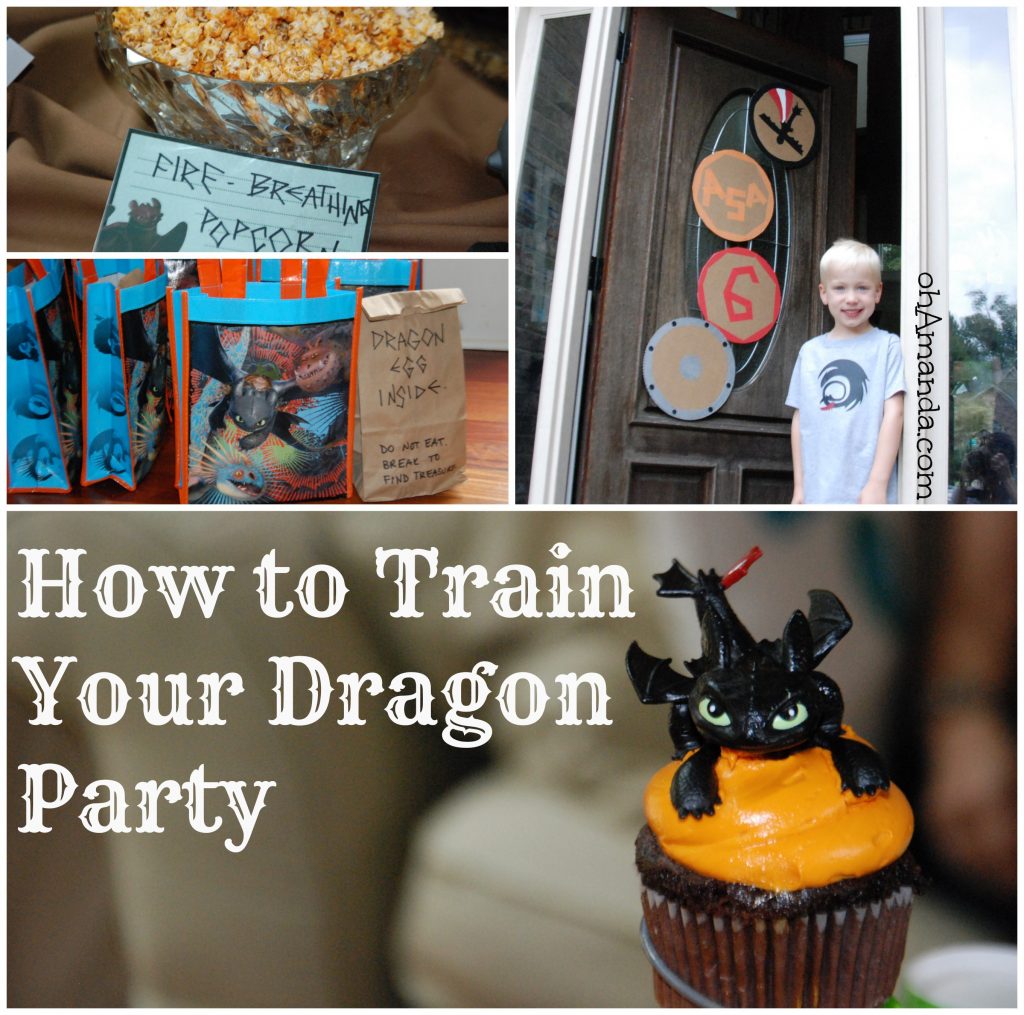 I didn’t want it to feel like a cartoon party covered with Toothless and Hiccup. Asa’s always had a soft-spot for Vikings (is that possible? Can you have a soft spot for people who love to pillage?) so I wanted a rough hewn wood, furry Viking feel to the day.

We started off with a fun Viking-y entryway. I bought some cardboard cake boards for the shields (I did NOT want to cut out a bunch of circles!) and made shields with them. I used colored masking tape on a few and hand-painted the others. 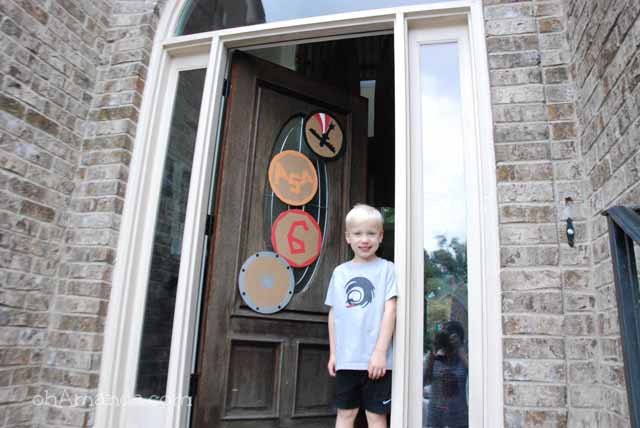 Then, my mom came through with all kinds of dark, burlap, furry fabrics and we basically just threw them all over the house. I especially love the three brown pieces of fabric hanging from the landing above! 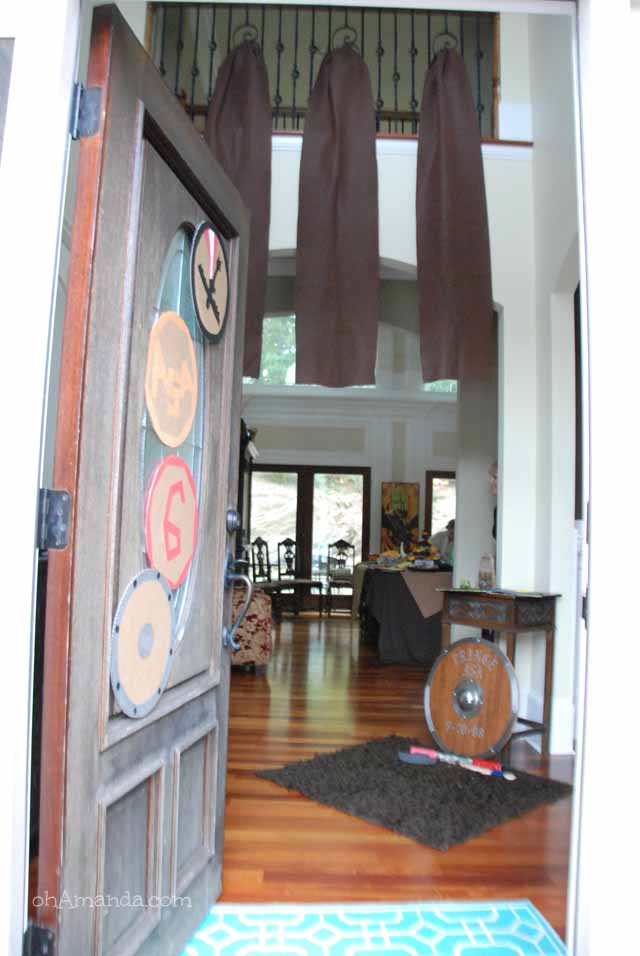 On the floor of the entry way was a bear skin rug…er, scrap of furry fabric, plus my son’s shield. Yes, he has a giant semi-authentic Viking shield with his name on it. My dad gave it to him when he was born. (He gave Lydia a bow and arrow!) 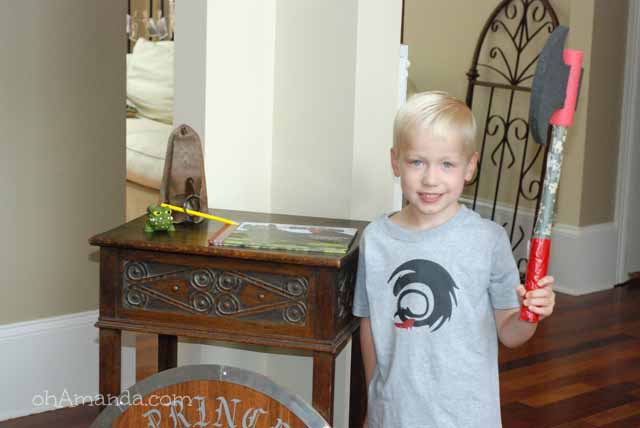 The little table holding up the shield has our guest book, a squeezy dragon (50% off at Wal-Mart!) and a metal Viking ship bookend my Grandfather made in shop class in High School! 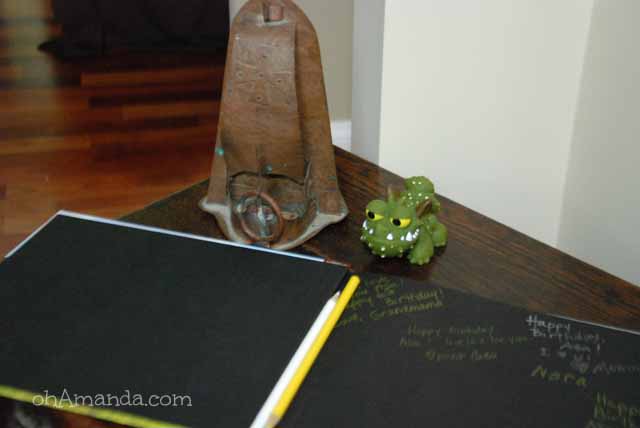 I absolutely love having a guest book at the kids’ parties. It’s fun to see all their friends’ handwriting and I think it will be a sweet keepsake to have when they make their first home.

When the kids arrived they signed the book and then moved to our giant map. Just like Hiccup, who is making a map of where all the dragons live and all the islands in the surrounding area, the kids got to add their own designs to the Isle of Asa! 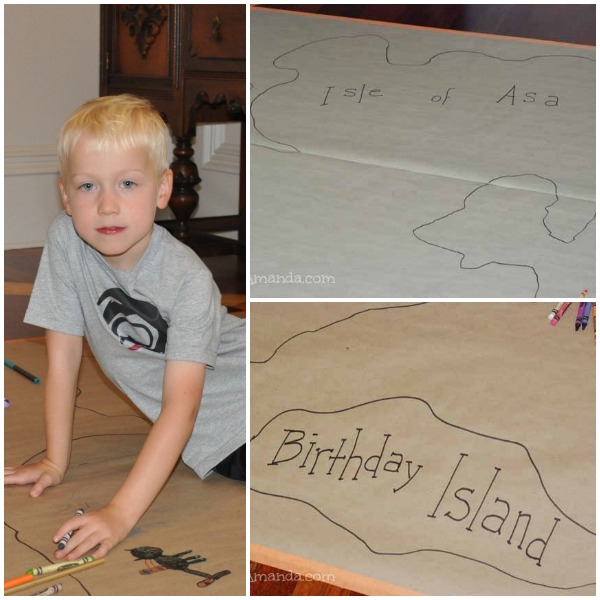 When they had their fill on the map, they got to make their own Viking shields! We used the cake cardboard circles again and I added a little duct tape handle to the back of each one plus a silver circle to the middle. Then, I collected all my foam pieces (which randomly included sea animals), duct tape and masking tape plus dot markers. The kids were so creative and really enjoyed making them. 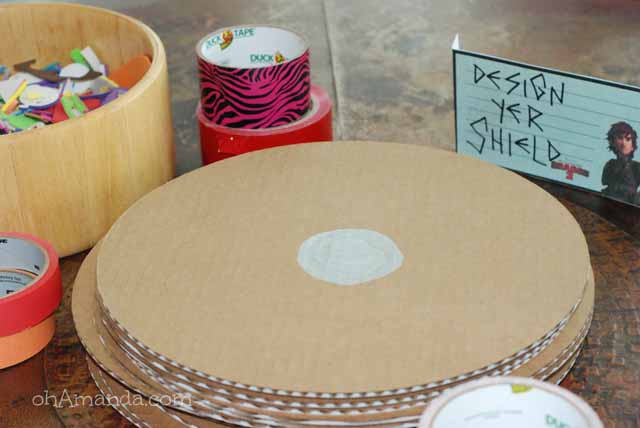 Now. The food. Because, really, that’s the most important part of a party, isn’t it?

First off is dragon claws—bugles dipped in chocolate. The kids loved making these and they were kinda delicious. 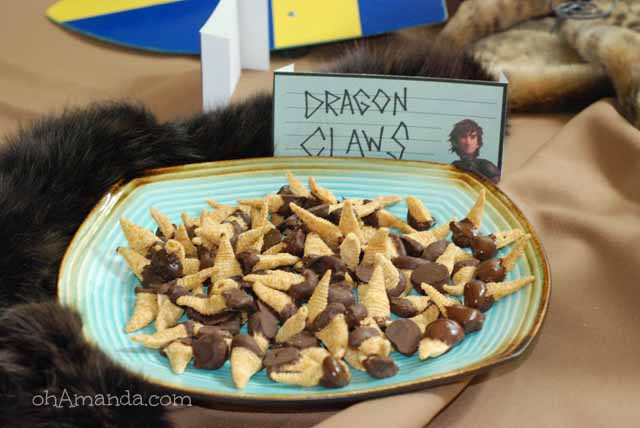 Asa really wanted to have turkey legs from Disney World but that thought literally makes me gag. We contemplated hot wings but instead, I settled on a Buffalo Chicken Dip I found on Pinterest. Super yummy. Especially with the “shield” chips. (Right?! You like those, don’t you?) 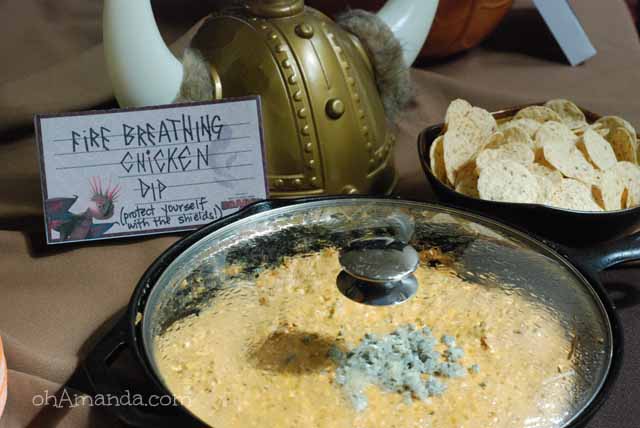 Our next food I apparently never took a picture of when it was open but basically it was a mix of goldfish and gummy worms. In the movie, Toothless likes fish but not eels! 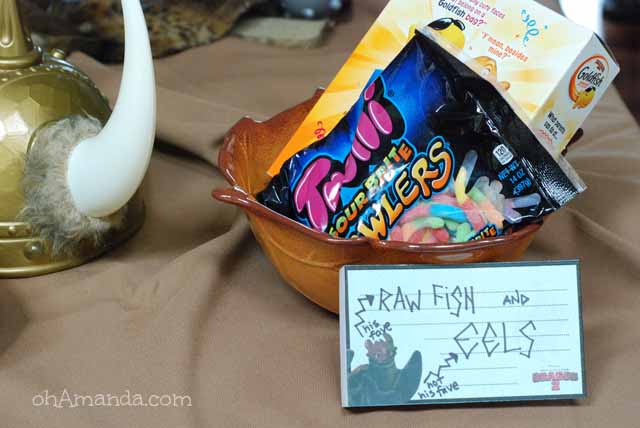 Probably my most favorite food of all was the Fire Breathing Popcorn. Who would have thought pouring hot sauce and parmesan cheese on popcorn would be addictive?! 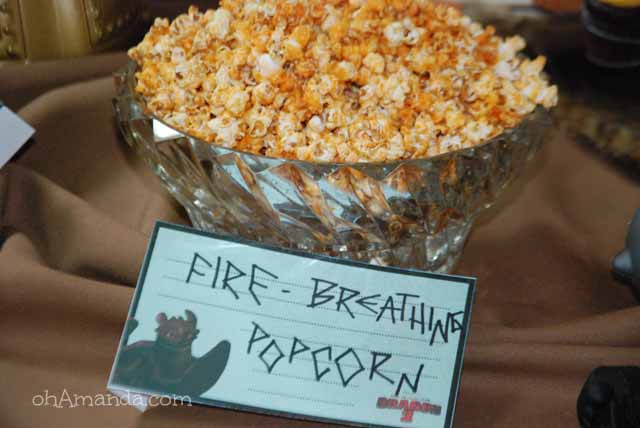 Now, for those of us who would like to be a tad healthier, I found the most perfect food ever: DRAGON FRUIT! We coupled that with some strawberries and starfruit and I thought it was beautiful! 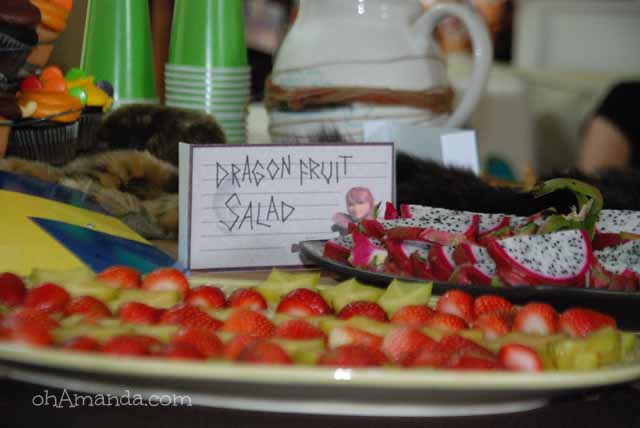 (Ooh, all those How To Train Your Dragon signs were printable postcards from the official site!)

For cupcakes, we grabbed some fall-colored cupcakes from Whole Foods and added cashews to the brown ones to look like Viking hats while the orange and yellow ones had Sprees on them for dragon scales. (It kinda looks like a dragon’s back, doesn’t it?) 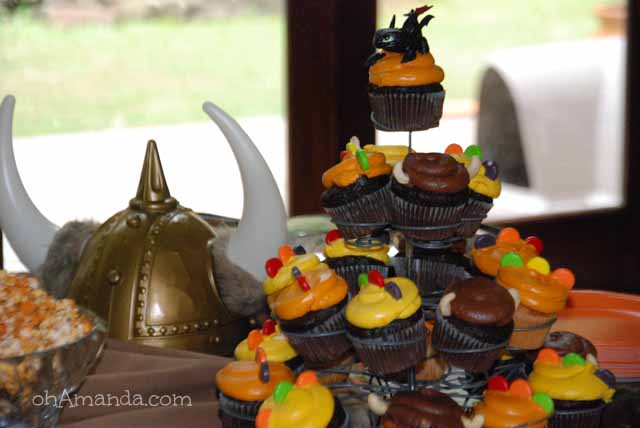 We just did water to drink and I did my favorite trick–add stickers to plain old cups to make them a little more fun. 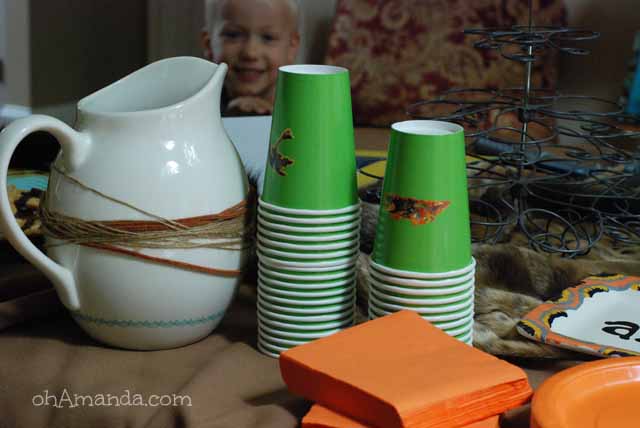 Now. Let’s get to the games. I wanted the games to feel like the moment in How To Train Your Dragon when Hiccup makes his giant dragon-killing-catapult-crossbow machine coupled with dragon games scene from the second movie. Since I had neither a catapult-crossbow or actual dragons, we went with WATER BALLOONS.

Buying water balloons in September is kinda awesome because everything is 50-75% off after summer! (Although, I did have to go to several stores before I found them!) We played a few traditional water ballon games (balloon on the spoon, water balloon toss and basically whatever game I could come up with before the kids got bored). 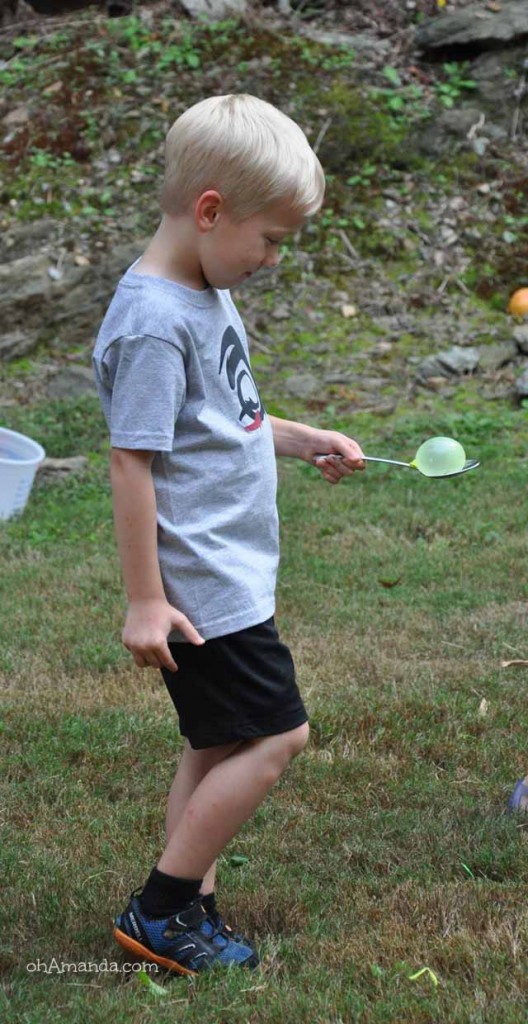 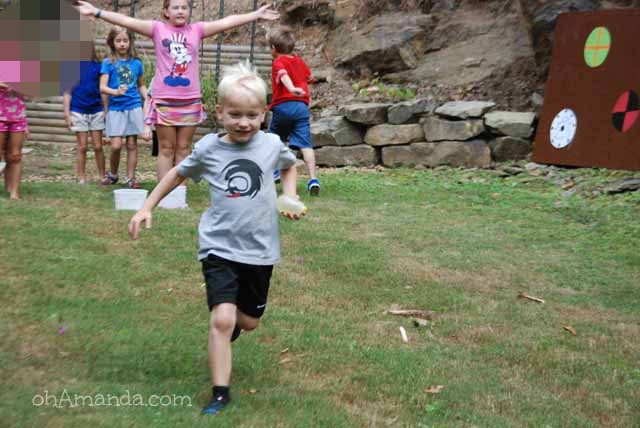 Then we pulled out the big guns. My dad bought two giant slingshots. I painted over our Toy Story Midway Mania targets with Viking shields and let the kids have at it. Well, actually, it was kinda hard and we had to help them. But they l-o-v-e-d it. 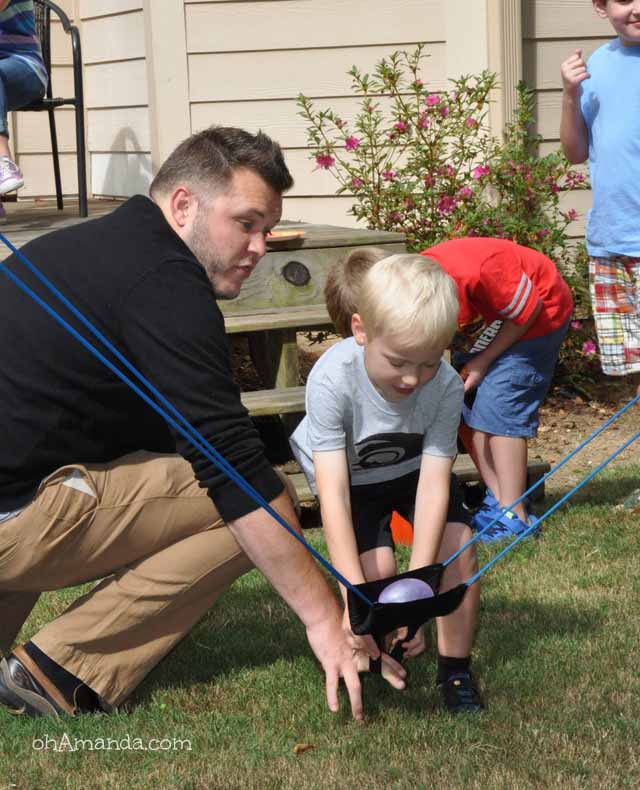 Did I mention the slingshots were hard to hold? 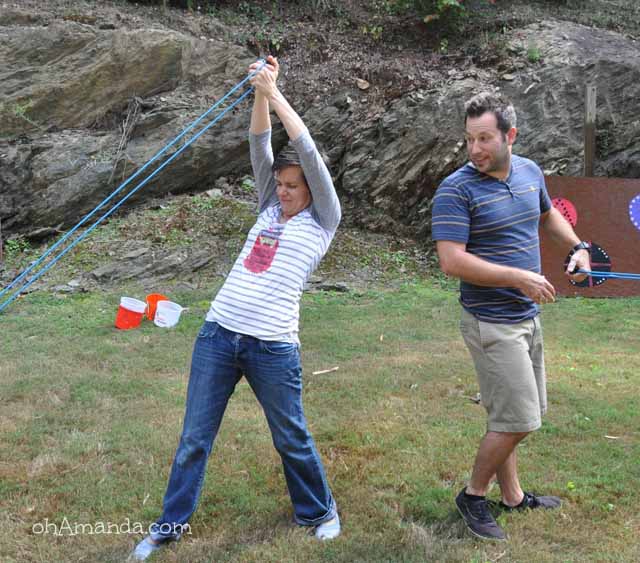 It seriously almost knocked me over once or twice. After the dads got in on it, they started shooting the balloons into the treetops and over the house. Boy heaven.

After a few good turns on the slingshot, we had a Dragon Egg Hunt. I bought about 16 different pieces of fruit from lemons to watermelon to dragonfruit and then hid them all over the backyard where we had been playing. We split the kids into two teams (boys against the girls) and gave them each a hula-hoop (“nest”) to collect all their dragon eggs. I told them they each had to collect 8 eggs and when they were all done, to sit in their nest. 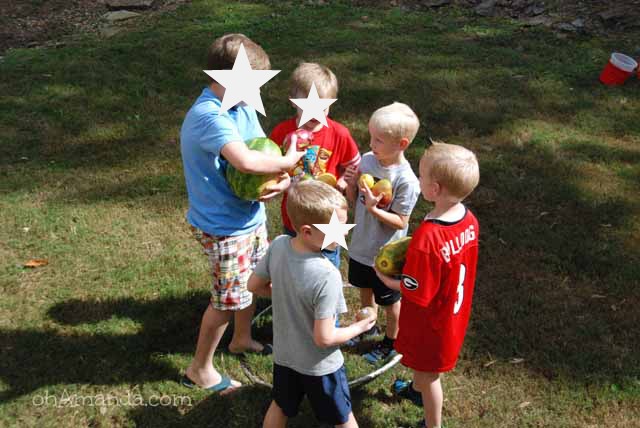 They LOVED this. The boys were super fast and found 8 eggs quickly–including the large watermelon and the bright dragonfruit. After the girls found theirs (try finding an avocado in a backyard–almost impossible!) we counted up their points: 100 for each fruit EXCEPT the watermelon was worth 2 points and the dragon fruit was worth 300! Boys win!!

We did actual goody bags this year because I found these sweet totes at Target for $1. Inside was another little bag with a treasure stone (shaped like an egg isntead), a sticky ball (actually, it looked like a flail which is creepy but also very appropriate) and some How To Train Your Dragon stickers and tattoos I also bought for $1.

After presents and cake, the day ended with a good, old-fashioned water balloon fight. 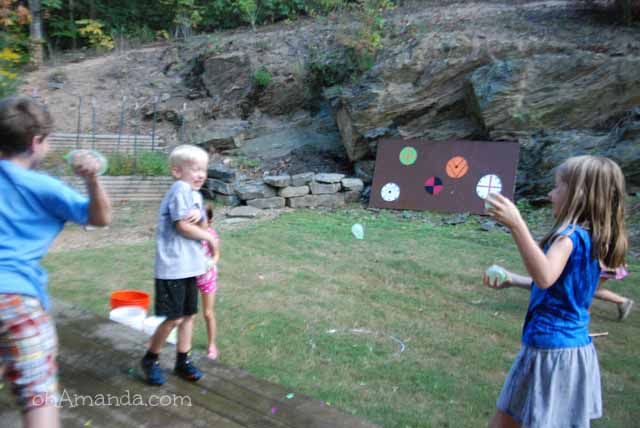 It was a super fun day and my little Viking, dragon-trainer was a sweet host and enjoyed every second of his 6th birthday party! 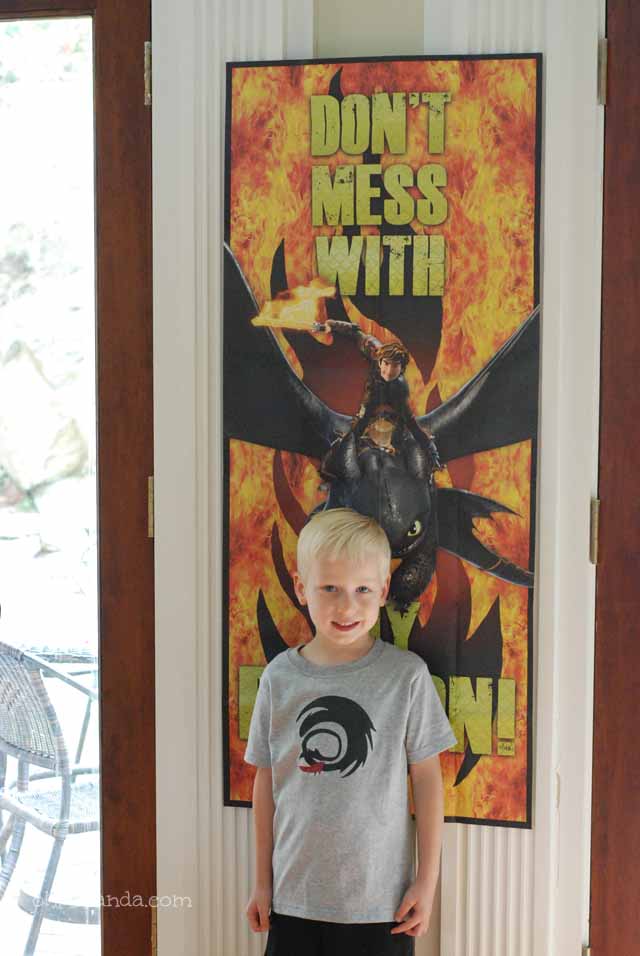 {I made that shirt with a graphic I found online but cannot find it again to link to it! Lemme know if it’s yours. And I’ll keep looking!}