You are here: Home / Family Devotions / Make Your Own Dragon Book: Dragon Week 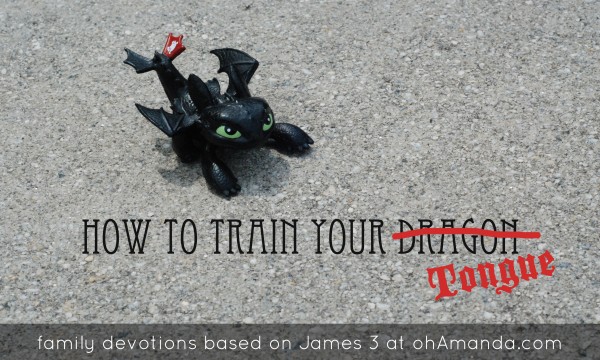 Dragon week is here! Well, it won’t really be a whole week here on the blog, but it was a whole week with my son! Every day that my daughter was at camp, Asa and I did some kind of dragon-themed activity based on How To Train Your Dragon 2 and James 3!

The first day, as we walked away from dropping Lydia off, I pulled a giant padded envelope out of my purse and said, “Asa. I found this. It says, ‘To a Dragon Trainer’. Do you know a dragon trainer?” (I had also drawn a viking hat and dragon on the envelope. It was pretty awesome.) He tore that envelope open so fast and was pleased to find his own little Hiccup and Toothless to play with on our long drive home.

(PS: These guys were hard to locate! I bought one at the worst store in the world, Toys R Us and one on Amazon. Then later, I found them cheaper at Barnes and Noble. Weird, right?)

I wanted us to add new Truth to our dragon books. But first, we had to make it.

So, I grabbed one of my favorite crafting tools: a brown paper bag. (Ours was from Trader Joe’s. Happy sigh.) We cut it down the seam and cut the bottom off. 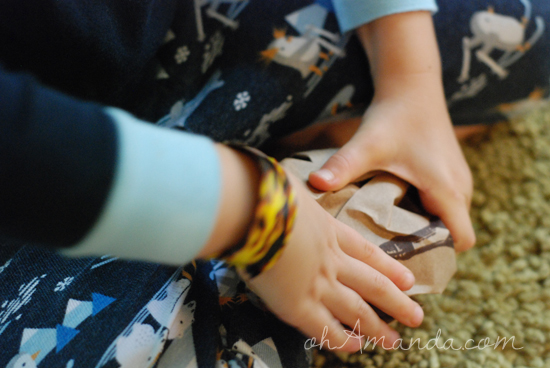 Then Asa smashed it up to make it look a little leathery.

Next, I used my handy dandy paper cutter to cut some regular old copy paper in half. (Asa wanted LOTS of paper in his book!) 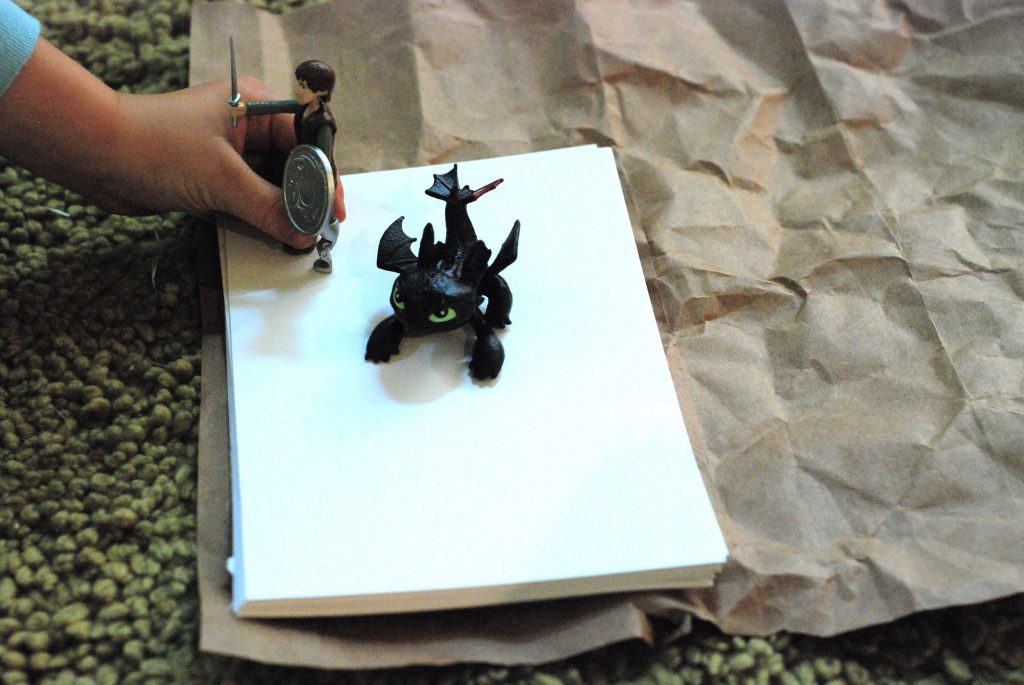 Then Hiccup and Toothless helped us measure out the cover of our book.

I punched holes in the papers, we layered it all up and used some twine to tie it together. I let Asa add some beads, some wiggly dragon eyes and then I drew an “A” dragon shield/coat of arms for the front. 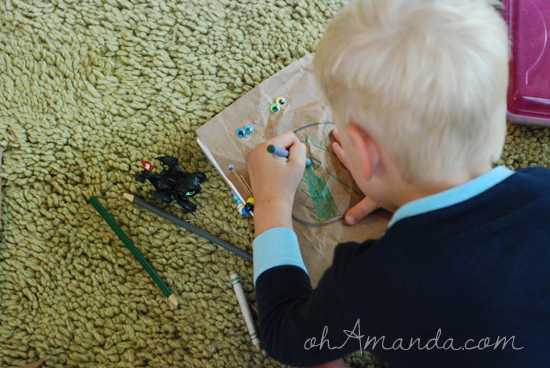 Not too shabby, huh? 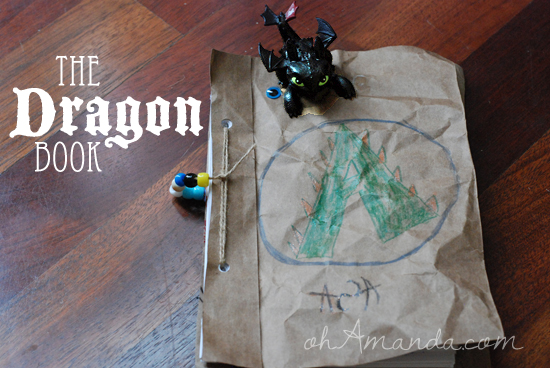 After our book was assembled I asked Asa about training dragons. What were the dragons like in the first How To Train Your Dragon movie when they were free to do what they want and not trained by the Vikings? He knew right away, “They were mean. They were out of control.” Then we talked about the difference in the main dragon, Toothless and the rest of the dragons after they were trained–they helped save the Vikings, they were friendly and even funny.

After establishing how good training can be, we read James 3:1-11. We talked about the horses being trained and controlled with bits (and even acted out how a bit works with a pencil!), we looked up a picture of a rudder (“I saw one of those on the Mickey boat!”) and talked about sparks and matches that set fires.

Then we stuck out our tongues and asked how our tongues could be so evil? Full of poison? He said, “I’m never going to bite my tongue because it’s poison!” I laughed and told him it’s not our actual tongue, but the words we speak from our lips.

Originally, I wanted us to memorize most of James 3:1-11 but after reading it with him, I realized that was not going to happen. Instead, I wrote the entire passage in his Dragon Book (WHEW.) and we illustrated parts of it together. 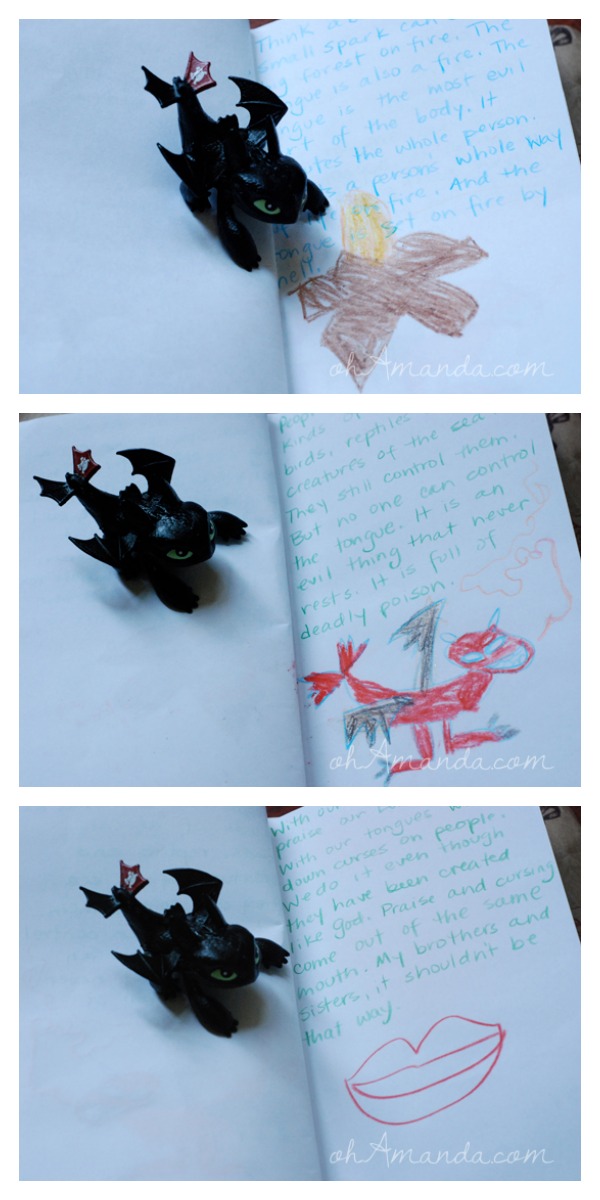 The rest of the week we spent filling up that Dragon Book with more Truth about training our tongues so they don’t start any fires or spread any poison to the people around us!  Stay tuned for more of our Dragon Book entries, a cute (yes, cute) dragon craft and some fun dragon books!