Yesterday was one of the crazy days where you’re at home for like ten minutes in 15 hours. We were at church, a local blogging event, meeting up with my parents (who my kids ended up spending the night with), out to eat twice and to the movies so our Sense of the Resurrection activity did NOT happen. {And as a side note, I don’t know if your kids like this so far, but Lydia curled up in my lap the other day and said, “I can’t wait to do our Resurrection activity today!” She loves it!}

So, this morning just for you, Asa and I did our Resurrection activity alone! We’ll do it again when Lydia gets home because it was kinda fun. If you’ve got boys in your family, I think they are especially going to like it.

Matthew 27:50-54 is one of the most exciting sections in this whole story about Jesus’ death and resurrection. I really wanted to the kids to know this part of the story because it is often overlooked. I love it…

“And when Jesus had cried out again in a loud voice, he gave up his spirit. At that moment the curtain of the temple was torn in two from top to bottom. The earth shook and the rocks split. The tombs broke open and the bodies of many holy people who had died were raised to life.  They came out of the tombs, and after Jesus’ resurrection they went into the holy city and appeared to many people. When the centurion and those with him who were guarding Jesus saw the earthquake and all that had happened, they were terrified, and exclaimed, “Surely he was the Son of God!”

So, Jesus dies. Then the curtain in the temple is torn in two (hear that rriiiiippp?!) from top to bottom! You could do a whole series on this! I didn’t mention it to Asa today because it’s got a lot of background story. But the idea is that the curtain that separated God from his people is not gone–and torn my His own hands!

Then! There is an EARTHQUAKE! And the rocks SPLIT OPEN! AND DEAD PEOPLE COME BACK TO LIFE!!

(Side note: It says they were raised at Jesus’ death. But didn’t appear to anyone until after the resurrection. What were they doing for those 3 days?!)

Talk about some noise! Everyone was terrified at this (because it didn’t happen at every crucifixion) and then the most awesome part to hear is the Roman (not a Jewish man, but a heathen Roman) says, “Surely he was the Son of God!” Even in death Jesus is drawing men to Himself!

I seriously, get wound up reading these verses! It’s so exciting!

Anyway, I thought it would be fun to make a bunch of noise to mirror the noise at Jesus’ death and to remind us that His death was different…so different the earth itself took notice.

So, Asa and I went in the backyard to collect rocks. We live in a blown out side of a mountain anyway, so there are lots and lots of rocks to choose from. We stacked the rocks up into a big pile and then I dramatically told the story of Jesus on the cross. How he took the vinegar and then said, “Father! I give you my life!” and died. Then I said, “What happened next?” Asa was wide-eyed when I said, “Earthquake!” 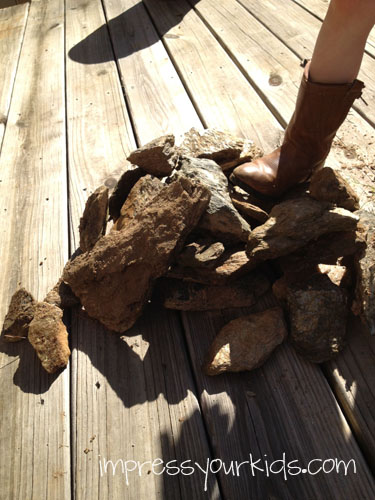 I let him kick over the rocks to hear them rumble and smash on the porch. We continued to pick up the rocks and drop/throw them on the porch. (See? A little boy’s dream!) They did make quite a ruckus and we discussed why there might have been an earthquake and what the people around the city thought.

We didn’t really come to any conclusions or a big application. Just talking about and experiencing the sense of hearing in this story was enough.

At one point Asa asked, “Why did the rocks split open?” I said something like, “Maybe they were sad Jesus died.” He said, “They need sad faces.” So, we cleaned off one our favorite rocks and tried to make a sad face on him with sidewalk chalk. It didn’t work but it was fun and I liked that he instigated it. 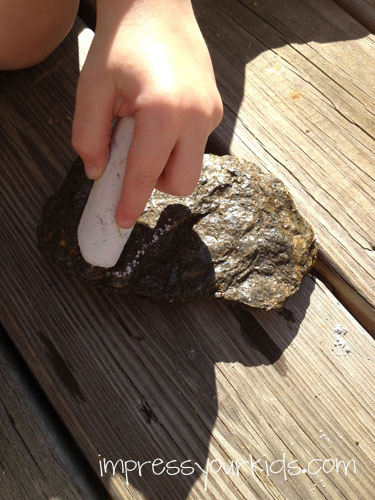 This led to chalking up the porch where Asa drew legs on Jesus (I drew his face. He kinda looked like Santa.), a nail and a cross. So, all in all, I call it a successful activity!

We’ll see how Lydia likes it when she gets home!