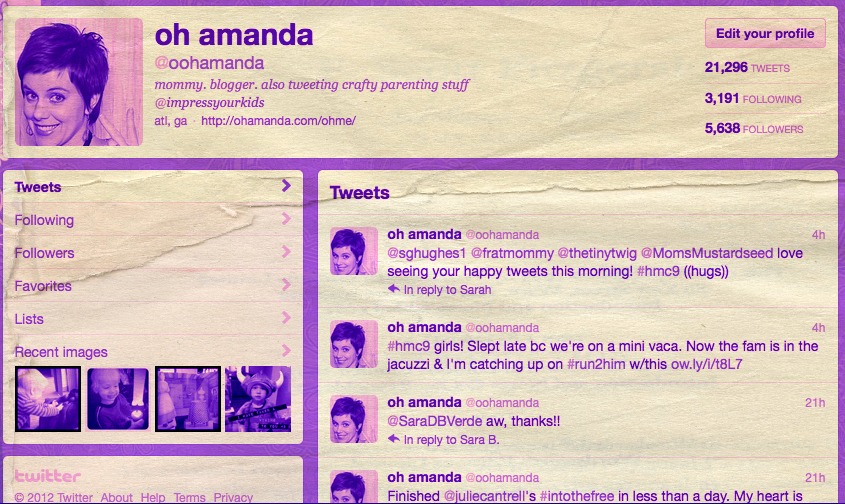 Do you like the way it takes me almost 20 days to do a 10 part series? Me, too. Anywhoo, welcome back to How *I* Write a Blog Post. Where were we? Oh yeah! We’ve written our post and are tryin’ to get it OUT there. After I facebook it, I tweet it.

Now, I have a long relationship with Twitter. In fact, I randomly got a tweet the other day that I’ve been tweeting 4 years. (It was my tweetaversary? Tweetday?) And I love twitter. Even though it’s crazy popular, it’s still kind of a secret club. I still hear people say, “I don’t get twitter.” And for some reason, that makes me like it more. I like being part of something that is mysterious to others. And actually getting something others don’t.

That being said, Twitter has definitely changed in the last four years. It went from hourly status updates to big conversations. Now it feels a little less conversational and a little more RSS feed. But I believe if you want to be IN Social Media, (that’s social media with a capital S) you need to be on twitter. Not just shooting your RSS feed to twitter but interacting on it and with it.

However, we’re talking about How I Write a Blog Post.

So, after I write a post, I send it to twitter. I usually do an update right away. Then I schedule it 2 more times for the day.

For example, 8am when I first post. Then lunch-ish (or nap-time) and another at 8pm-ish (which is kid-bedtime!). There are all kinds of research on when the best time to tweet is, the most RT-able time, etc. I just tend to tweet them when I am actually on because I figure my audience has a similar schedule to me.

I use Tweetdeck to schedule my tweets. But Hootsuite also works well. I don’t like those automatic from your blog post tweets. I know I occasionally do them. But I don’t like them. They are ugly.

I’m also very conscious of a few things in my tweets:

1. Make it RT-able. If you write a tweet that is 139 characters, no one will be able to retweet (RT) it. So, pare it down to give yourself room for a RT. I know I’ve seen good tweets and go to RT them but when I couldn’t cut it down to RT it, I just dumped it.

2. Link to others. I’m all about being generous with my tweets. I try to use others’ twitter handles, popular hashtags and company twitter handles. This will get you RTs, too. People love RT-ing nice tweets about themselves. (Although that can be a little tacky. I like the advice to STAR them instead.)

3. Keep it neat. I shorten my links so my tweets aren’t ugly. I like bit.ly because it’s shorter than some of the others, I can look at stats of my tweets and the links are customizable. I almost always customize important links because, which one would you rather click on: bit.ly/TangledParty or bit.ly/Idksl91? That’s what I thought.