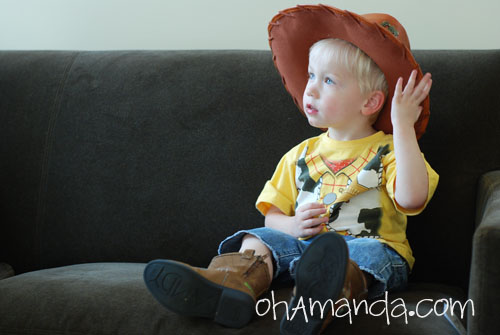 An alternate title to this post could be, “How Asa’s Toy Story 3 Birthday Party Turned into a Toy Story Midway Mania Party”. As I was thinking about activities for this party, all I could think of was basic Cowboy games like horseshoes and stick horse races. And none of that excited me.

Then I started thinking about my favorite place on earth: Disney World and it’s awesome Toy Story attraction called Toy Story Mania. It’s like this big 3D adventure where you shoot a gun-thingie while aiming at targets held by your favorite Toy Story characters. And suddenly, that’s what I wanted Asa’s party to be–a Toy Story Midway Mania Party!

So. Look what I made: 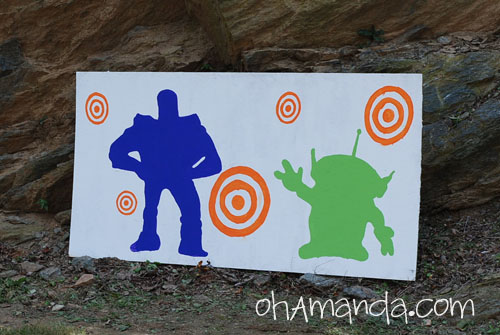 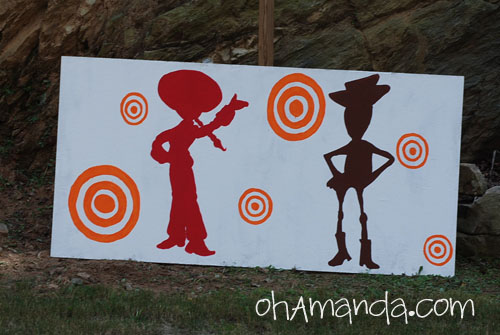 Yup. That’s 2 pieces of chipwood-osb-board for $5 a pop at Home Depot. I painted them with some primer we had downstairs. Then printed off some pictures of Buzz, Woody, Jessie and the alien onto an overhead projector sheet. I used my mom’s overhead projector to get them the right size on my board, traced and painted them!

Woody and Buzz are a little crazy looking because I used a real picture of them—which are so detailed that the silhouette looked off. I finally found a coloring sheet picture of Jessie and hers turned out the best. (Although I did freehand her boots and braid. Also, Woody’s boots!)

The targets are a combination of freehand and overhead projections. No matter how I did it, they were lopsided. But if you don’t look too close, you’ll think you’re at Disney World! Right?!!

And just WHAT did we shoot at these targets with?

Well, the kids made their very own Laser Blasters or Six Shooters out of PVC! Wanna see? 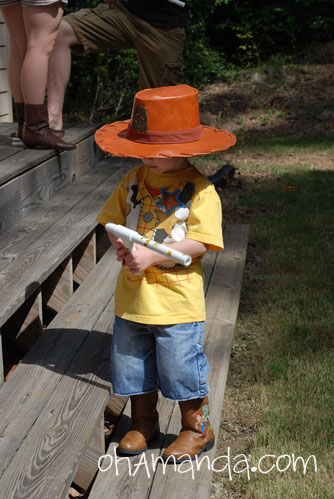 And just what does it shoot? Well, this is the best part: MINI MARSHMALLOWS! You stick a mini-marshmallow inside and then like a blow-gun, blow the marshmallow out! 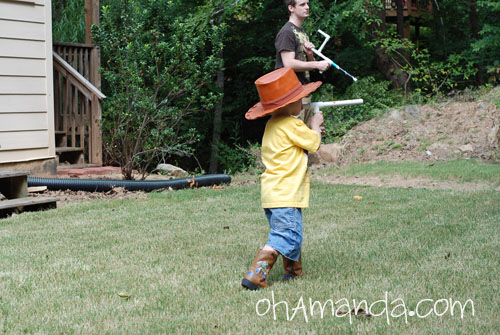 I had my husband cut all the pieces for the guns (see my tutorial!!) and set them in bowls on the back porch. The kids got to put their guns together and decorate them with colored duct tape 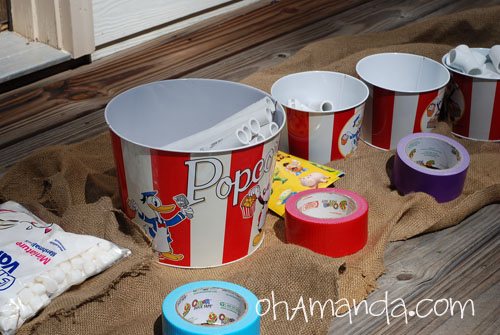 Once their gun was complete it was time for the fun! We made a mini gun for the kids. But we knew the dads might like something a little more high tech. So, we made some big guns for them. Here’s my sister-in-law’s husband, my brother and my husband,  having waaaay too much fun with their marshmallow shooters: 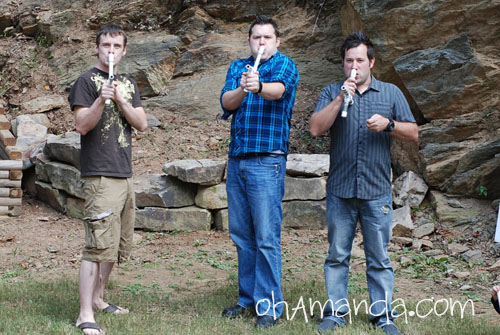 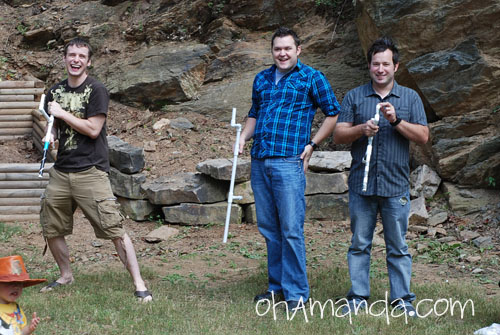 {and laughing when they hit their target—all the girls on the porch!}

The kids had a super fun time shooting the targets (and each other) with their marshmallow guns.  Most of them just stood there and shot the targets over and over again. We just set the marshmallows in the middle of the yard and let them have at it! 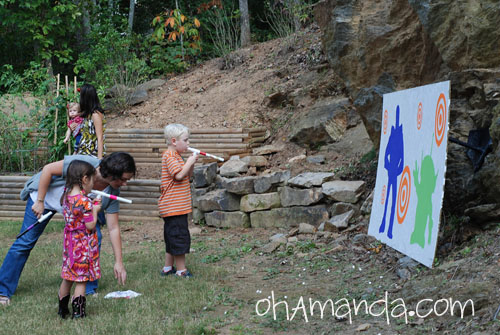 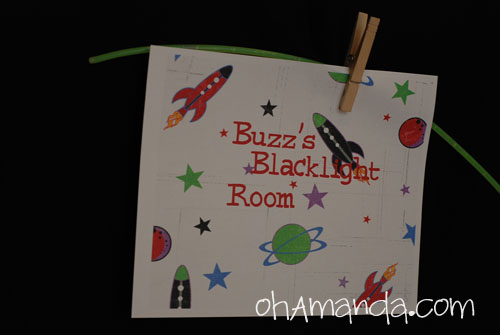 My mom and I hung up my black puppet stage (what would I do without that puppet stage?!) in the dining room. Then I covered all the windows with black paper, fabric and whatever else I could find. We hung up three Black Lights

, turned off the overhead lights and let the fun begin! 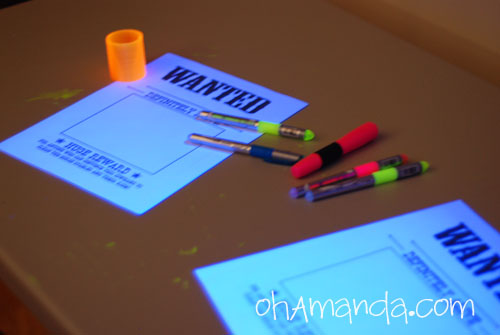 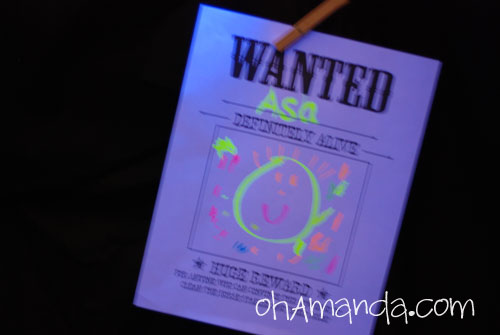 I printed off these cute Wanted posters and set out highlighters. The kids got to color and draw their own black light pictures. It was really fun! They had to crawl under the curtain to even get in, so once they were in, they stayed awhile. It went over even better than I thought it would. 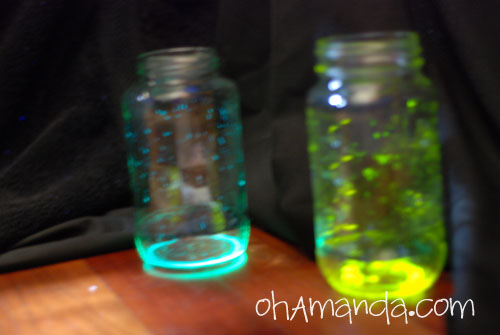 I also bought some glow necklaces at the Dollar Tree, cut them open and slung the glowy stuff inside a jar. It looked awesome for awhile. Then the glow-juice slid down to the bottom of the jar. But for awhile? Awesomesauce. 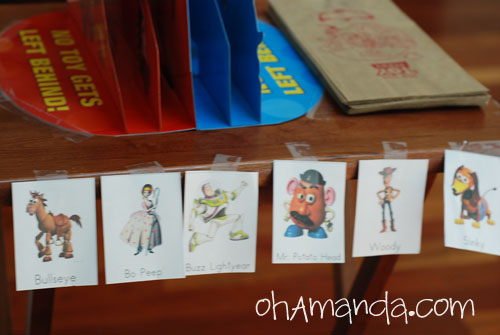 Our last and final activity was a do-your-own-scavenger hunt. I got the idea from my very own Snow White party. I found these cute matches/memory game with the Toy Story characters at 1+1+1=1. So, I printed off several copies and hid them in stacks around the room. (Like one stack of Jessie under the chair, one stack of Slinky on top of the table, etc.) 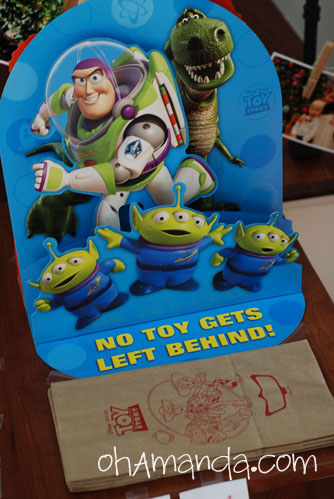 Then the kids had to come to our NO TOY GETS LEFT BEHIND TABLE to pick up a Toy Story paper bag (I really wanted these to be mini cardboard boxes that said Sunnyside Daycare. How great would that have been?) and then look at all the characters I had taped on the table. They were to find the hidden characters and put one each in their bag. When they got them all in their bag they could come back to me for a prize (a sticker or slinkie).

The kids loved this! One of them even asked if he could do it again. I said, “OK, but I think it will be a lot easier this time!”

So, what do you think? Pretty fun, huh? I think I may have to revisit the marshmallow gun party for when Asa’s 8 or 10. Can you imagine a backyard-full of elementary school boys doing that? SO FUN.

Oh, and one more picture of the birthday boy opening presents for you: 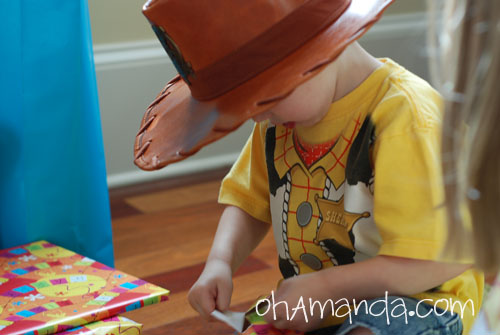 {Did you notice a complete absence of Lydia in these pictures? As we were setting up for the party, she was whiny and uncooperative the whole time. Finally, we took her temperature and it was 104! Poor little thing! We had to call my in-laws to take her to their house during the party. We thought she might have strep and didn’t want to give it to the rest of the kids. Poor Lydia sobbed when we told her she wasn’t going to get to stay at the party. It was so sad. And I’ll tell you, it was awfully quiet without her sweet laugh. Asa still says, “I wish Eeeya came to my Woody party.” *sniff*}