You are here: Home / books / Babies, Brides & Bosses: HOW TO Books by Sally Lloyd Jones

My favorite books are series. I love when you fall in love with a character and then get to read multiple stories about them! Well, I’ve got a super fun HOW TO series to share with you today! And it’s written by one of my heroes, Sally Lloyd Jones (yes, author of the Jesus Storybook Bible)! Ready?

Book One: How To Be a Baby…By Me, The Big Sister

When one of Lydia’s friends, Juliet (from Silly Eagle Books) became a big sister this year, Lydia wanted to give her all the big sister books she collected when Asa was born (I think there were only two. But it was a big deal to Lydia!). So, when we  found How to Be a Baby…by Me, the Big Sister, we knew we had to give it to Juliet when her new baby sister was born!

The Big Sister in the book gives a monologue about the differences between babies and Big Sisters. (“When you’re a baby, you don’t read books. You eat them.”) She also gives tips, instructions and rules about being a baby. (“…and a special plug goes in your mouth. It’s called a pacifier and it’s to stop your scream coming out.”) It is really one of the funniest books I’ve read! It’s as if you interviewed ten 4 year olds about what babies do and compiled them into a book! It is hilarious.

But my favorite part is how it ends–with the big sister and the little baby thinking about when they grow up—and are best of friends! *sniff*

Book Two: How To Get Married…By Me The Bride 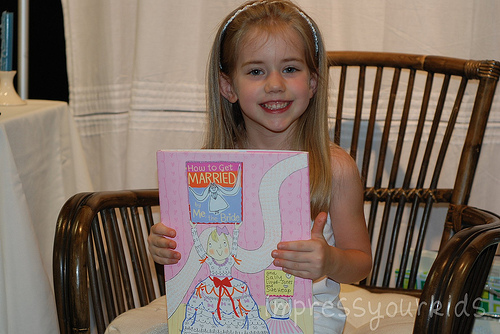 My sister-in-law is getting married in August. At her bridal shower last weekend, we didn’t buy her towels or a toaster. We gave her books. (I gave her The Power of a Praying Wife

and For Women Only.) Lydia gave her How to Get Married…by Me, the Bride

Honestly, at first I didn’t want to read a book about weddings for Lydia. I’m in the don’t-mention-it-for-as-long-as-possible camp!** But this book is SO sweet and SO adorable, I am the one that wants to read it again! It’s the same idea–a little girl explaining how to get married. My favorite part is when she explains the special clothes you have to wear (you can wear a wig or even bunny ears on your head!)

And the ending? Makes my heart ache–she walks away, waving good-bye to her guests while holding her Daddy’s hand! It was all a playdate. And she knows which man to go home with at the end of the day: her Daddy!

Book Three: How To Get a Job…By Me, The Boss

Now, Sally Lloyd Jones has added a 3rd book to her How To series! It’s called, How to Get a Job…by Me, the Boss! Our Big Sister/Bride is a little more grown up (with longer hair, Lydia noticed!) and her little baby brother is getting in on the fun! In this book we learn about all kinds of jobs from magicians to teachers to police officers. There’s even a section on resume writing, “you must write down EVERY SINGLE THING you’re good at on ONE PIECE OF PAPER…sometimes it’s SO HARD to fit everyone on only one page, you just have to use FIVE.”

If you’re kids love to pretend or imagine what it’s like to be someone else, these books are perfect! And obviously, they are pretty fantastic as gifts, too. I just wish I knew someone looking for a job so I could give them this book!

**{FYI: There was one line in the book that raised my eyebrow and has apparently had people writing bad reviews online. She says, “You can marry anyone you like!” which many people have read as a nod to homosexuality. Of course, the book also says you can marry a flower. The entire book is full of marriage inconsistencies. That’s the whole funny point! In fact, when we read that part, Lydia said, “Except you have to marry a boy!!” and laughed and laughed. For us, it was a conversation starter. Not that we had a conversation about sexuality. THAT WAS the conversation! Point being: read it first if it makes you feel weird.}

I was given these books by Random House. But like I said, I had already bought and given one! Then gave away another. So, you can bet all opinions are mine!