You are here: Home / Devotions for You / On THEIR Level: Salvation for Kids {Part 3} 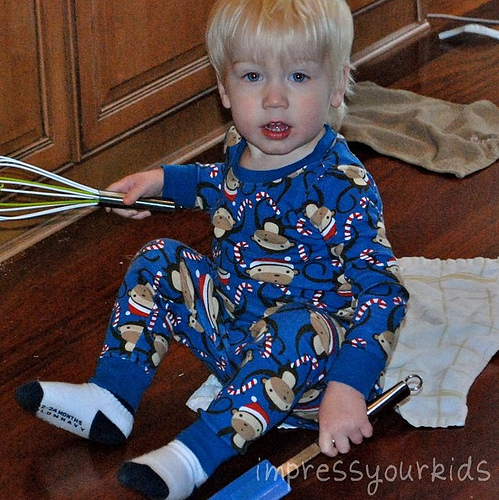 Every morning the kids unload the dishwasher. Asa (only 2.5) puts the silverware in the drawer. He doesn’t sort it (he can’t see into the drawer), he just drops it in. When we first started this about 7 months ago, he sobbed. He hated it. Finally it got to the point (after lots of helping, lots of cheering him on and standing by him the entire time) that he would cry if he did NOT get to do the dishes.

Yesterday he was wandering around, not doing the dishes. He would pick up a toy, then I’d remind him to do the dishes. He’d walk back and put one utensil away and then get sidetracked. I get it. He’s two.  But even for a 2 year old, it’s only a 4 minute job. He can and does do it regularly.

Finally, he shut the dishwasher door and ran to me (as is his custom) shouting, “I did the dishes! I did them all!” I gave him a big hug and congratulated him on helping. After lunch, as we put our dishes away, I opened the dishwasher with Asa at my side and saw all the silverware exactly where it had been that morning! I looked at Asa and said, “Asa, you told Mommy you did the dishes. Why didn’t you do them?”

His face was ashen. He knew immediately what I was talking about. He stood stock still looking down at his toes.

I asked again, “Asa, why didn’t you do the dishes? You told me you did the dishes.”

Then I played the big card, “Asa. That’s called lying. And that makes Mommy very sad. And Jesus, too.”

And then I got sick to my stomach that my 2.5 year old had just LIED to me. Granted, when he shut that dishwasher after breakfast he wasn’t calculating, “Oooh, I’m going to dupe Mommy!” For the rest of the day I’m sure it never entered his consciousness again. If I had said nothing about it, he wouldn’t have realized he had not done the dishes. But in that one moment he made a decision to not do what he was supposed to do.

People wonder if kids are old enough to understand salvation. They wonder if they “get” sin, forgiveness and repentance. Well, they might not understand it as much as YOU do but I saw my 2.5 year old physically react to realizing he had disobeyed me. He got it. He got it on a 2 year old level.

My husband’s brother-in-law was involved in a lot of bad stuff before he became a Christian. Scary stuff. And when he finally gave his life to Jesus, he really felt the weight of his sin and the freedom Christ brought him. But you know, I was raised in the church and the worst thing I ever did was to “forget” to tell my parents when I was coming home from a date. So, does my brother-in-law understand sin and forgiveness more than me? Do I not really “get” repentance when my sin was minimal in comparison? No. All our sin is like filthy rags to God. And Jesus died for me just like he did for my brother-in-law.

Sure my kids don’t fully understand sin, repentance, Jesus’ death, resurrection, mercy, grace and sanctification. But guess what? They don’t understand reading, science or math in it’s entirety either. They just know it on their level. We sing the ABCs ten times a day for my 2 year old, we read chapter books for my 5 year old. They can’t read Shakespeare but it doesn’t mean they don’t appreciate a good book or know that words and stories are important.

My son can count to about 15. Then he jumps to 17 and back to 12. Lydia can count to 100. But she can’t do long division. She can’t balance my checkbook. But she gets numbers on her 5 year old level.

I teach my kids the basics. I lay a foundation. They eat baby bites and then advance to big boy bites. We  must help them know Jesus on their level, then they can grow into a bigger understanding of salvation and a relationship with Jesus.

Like newborn babies, you must crave pure spiritual milk so that you will grow into a full experience of salvation. Cry out for this nourishment, now that you have had a taste of the Lord’s kindness. 1 Peter 2:2-3

Part 1: What Jesus Says About Kids

Part 3: On THEIR Level