You are here: Home / Kids Crafts / Apple of My Eye 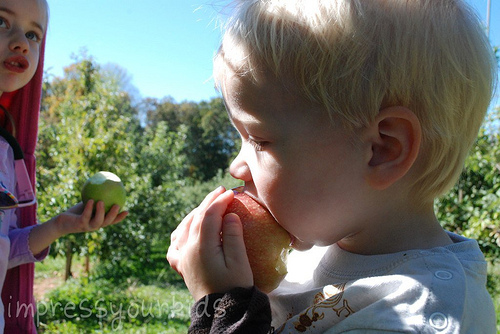 We went to an apple orchard on Saturday. It was so beautiful to see all the trees full of apples. But it was more fun to pick and eat them! We picked a peck of apples (whatever that is) and then bought 2 more bushels. If you don’t know how many apples that is…well, let me tell you, it is A LOT! I have apples everywhere in my kitchen. We eat apples for every meal. We’ve made an apple pie, apple muffins and even an apple sausage quiche. Today we are going to conquer applesauce!

Since we’re up to our eyeballs in apples, I thought an apple verse might be a good idea. But does the Bible say anything about apples? Actually it does! The Bible refers to US as the apple of God’s eye! Isn’t that awesome? Then I found another verse in Proverbs 7:2 that asks us to make God’s Word the apple of OUR eye:

Keep my commands and you will live; guard my teachings as the apple of your eye.

Today we did a little apple stamping. This isn’t a new idea, in fact I think we’ve posted about it before on the blog. But I did add a new twist—I put those little corn cob holders in the top and the kids could easily pick up the apple to stamp it! Works for me! 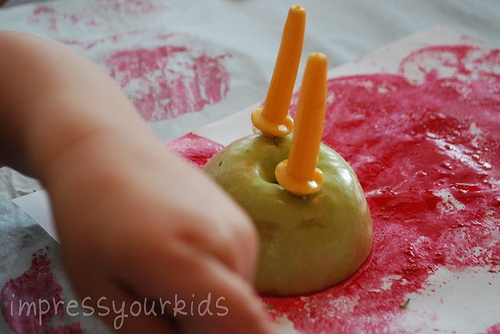 Then we cut out the apples, glued them to some red paper, punched holes and ran a piece of yarn through them for a memory verse banner! Isn’t it pretty? 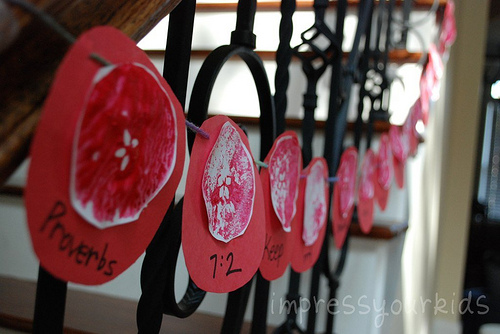 As we made our apple stamps and banner, I tried to explain the “apple of my eye” phrase to the kids. We looked closely at each others eyes until we could see our reflections in them. I told them only a special person you loved could see the reflection–someone CLOSE to you.

Then we talked about how God is that close to us and he calls us the apple of His eye. After we read the verse a few times we talked about keeping God’s Word and his laws close to our eyes and our hearts. 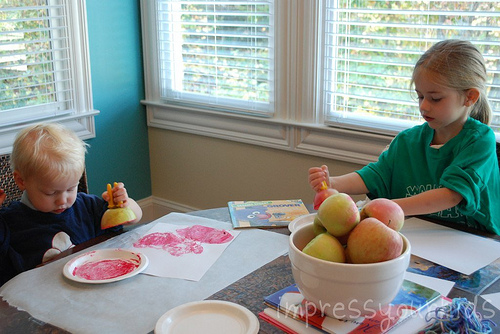 Then (and this is kind of a stretch AND mixing metaphors) I cut the apple around the equator and showed them the pretty hidden “star” inside. (Lydia said it was a flower, of course!) We talked about how it was hidden and close to the middle of the apple. I explained that God’s Word should be THAT close to us and our hearts!

Like I said, it’s a little bit of a stretch, but I think it helped them understand the point of keeping God’s Word close!

works for me wednesday