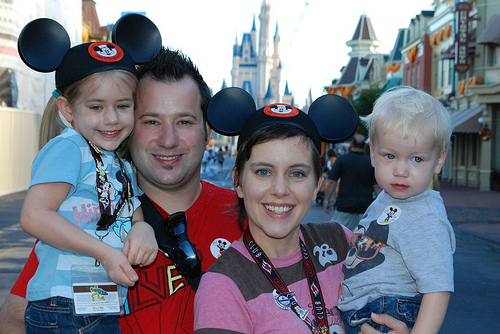 We’ve been home from Disney World for 4 days, but we’re still in vacation detox mode. Lydia has actually slept during all her naps this week (which she never does!). Asa has been whining and stomping his feet about everything from socks to books. And I still have unpacked bags…and dirty clothes…and dirty dishes. Vacations are fun, but when you come down from that high, well, there’s definitely a low!

I think some people hit that low while they are actually ON vacation. I heard so many harsh words aimed at children while we were at Disney World. I saw so many kids yelling at their parents. I saw steaming mad people roughing up their kids with words and actions.

One day we were standing on a dock waiting for a boat to take us to Fort Wilderness for dinner at the Hoop Dee Doo Musical Revue (this is a must see at Disney!). There was a family of 5 in front of us–3 little boys and the parents. The entire time we were on the dock, the mother was speaking barbed wire to these kids. It’s the only way I can describe it–that or flames. At one point, she folded up the stroller and one of the little boys tripped over the wheel–more her fault than his. She yanked him up by the arm and yelled at him for tripping and not paying attention.

At first I thought, “Good grief. She’s at Disney World. She needs to chill out. She’s making her kids feel terrible.” But as the week went on and I heard some of the things that came out of my mouth, saw some of the expressions my husband made and noticed the way I sighed heavy sighs when my kids were misbehaving I understood. Parenting is tough. Parenting tired, over stimulated, over sugared kids is even harder!

But did I expect myself to act perfectly? Did I speak with love? Did I respond out of anger? Did I use self-control?

I saw a double standard this week. Parents expecting their kids to behave when they couldn’t behave themselves. I didn’t let my daughter roll her eyes at me…but did I roll my eyes at her behavior? I didn’t let my son yell at me. But did I yell at him?!

When my kids disobey and I respond in anger because they are so wild and out of control, it’s easy to justify it. I’m the adult. I’m training THEM. I know what’s right and wrong. They don’t. Right?!

But isn’t the most important lesson how WE respond to them? Aren’t our actions and words more important than the “discipline”?

God is clear in his Word about how we should be consistent in our behavior–not just as parents, but as Christ followers:

Do not merely listen to the word, and so deceive yourselves. Do what it says. Anyone who listens to the word but does not do what it says is like a man who looks at his face in a mirror and, after looking at himself, goes away and immediately forgets what he looks like. But the man who looks intently into the perfect law that gives freedom, and continues to do this, not forgetting what he has heard, but doing it—he will be blessed in what he does. James 1:22-25 (NIV, emphasis mine)

It was a harsh lesson for me. I pray the fire and barbed-wire words I spit at my kids was minimal and the example of self-control (even when tired and sugared-up) was evident.

Are you holding yourself to the same standards you hold your children to?