Last night I had this urge to read a book. Actually, I wanted a new audiobook for my walks. So, I did what any normal person would do. I asked my social media networks. First facebook: 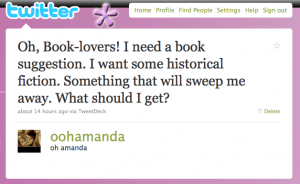 And did yall come through or what?! Here is the current list of suggestions (it’s still growing!):

The Princess by Lori Wick

The Other Boleyn Girl by Philipa Gregory (I must have missed the bandwagon on this one.)

Just Between You and Me by Jenny B. Jones

The Red Tent by Anita Diamant (I have picked this one up at the library about 400 times. I must read it!)

Water for Elephants by Sara Gruen (This one is set in a circus. And for some reason that totally intrigues me!)

The Help by Kathryn Stockett (This was THE most recommended book. I’ve already got it on hold at the library!)

The Girls by Lori Lansen

The Story of Edgar Sawtelle by David Wroblewski

The Girl with the Dragon Tattoo by Steig Larsson

Pride and Prescience: Or, A Truth Universally Acknowledged by Carrie Bebris

Zion Chronicles by Bodie & Brock Thoene (Uhm. They are my heroes.)

The Pillars of the Earthby Ken Follett (This one looks so good but do you know how long the audiobook is? 40 hours!)

Thorn in My Heart by Liz Curtis Higgs (This is the first in a series. I’ve actually read it but it was such a literal thorn in my heart I couldn’t read the second one. SO GOOD.)

Anything by Tracie Peterson

Her Mother’s Hope by Francine Rivers (Already read this one! Waiting for the sequel!)

The Heretic Queen: A Novel by Michelle Moran

The Greatest Knight: The Unsung Story of the Queen’s Champion by Elizabeth Chadwick

Got one you’d care to add? Or second one of the above? Let me know, I’m going to the library TODAY!