So, two weeks later (or three, but who’s counting?) I want to tell you about the rest of my Disney Mom’s Panel training!

The next morning (after I took a shower with no kids pressing their noses to the door) we had breakfast at Kouzzina by Cat Cora. I had a blueberry orange oatmeal pancake…complete with a hidden Mickey! 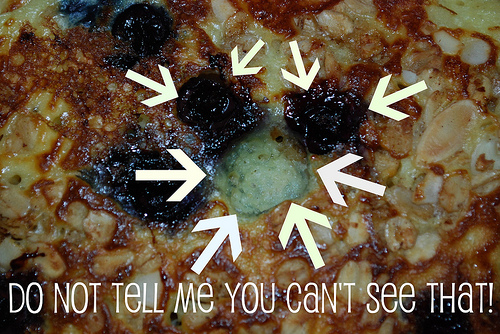 We were then whisked back to our hotel, but not for a nap. No, instead we went to the top floor—the California Grill for our VIDEO SHOOT. We were originally scheduled to do our video shoots outside at Epcot or something. But because of the rain, the Christmas Parade and the Jonas Brothers, we ended up at the Contemporary. No big deal. Despite the rain it was a nice view of the castle. Ahem. 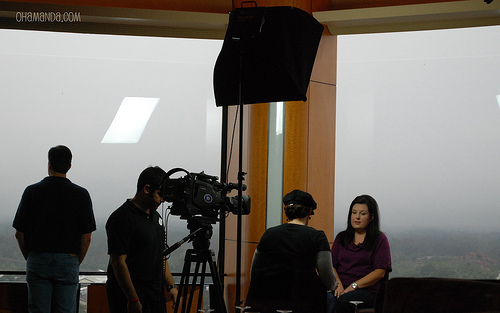 One of the other Amandas looking famous!

I was not at all nervous about giving my bio and answering questions in front of a big camera, bright lights and famous Disney video techs. AAAAHHHHHHHHHH. OK, so maybe I was a little nervous.

My first spiel was pretty good. I said everything I wanted to say, smiled, used my hands and was even kinda witty. But my ending? Well, not so hot. They tried to encourage me by saying, “Well, maybe you paused at the end and we can cut it out…” I did two more takes and each one was a little more wooden and a lot less me.

Finally, they asked me questions about Disney, the Moms Panel, rainbows and kettlecorn—I don’t know, I was so freaked I can’t even remember. I do remember there were lots of “uhm, well, you know, er, uh…”

Overall, I think I did ok. You can tell me what you think of it because the 2010 DISNEY MOMS PANEL IS LIVE TODAY!! Please go click around DisneyWorldMoms.com–meet the new panelists, watch our intro video, read our bios and even ask a question! Whooo-hooo! {{It looks like it’s taking all day to fully update. Keep checking until you see me…I mean, everyone!!}}

Now, where was I? Oh yeah. My interview. *shudder*

After everyone was done with their bios and sufficiently over their panic attacks (not mentioning any names, Onasjay), we went on a secret tour of the bowels of the Magic Kingdom, affectionately titled The Tunnels. (I have actually been there before when I was a kid. I got to go on an Entertainment tour and saw the tunnels, parade warehouse, costuming and more cool stuff.) I have no pictures of the tour, though because it was so TOP SECRET.

We were led out of the tunnels and onto our own masking-taped square in front of the castle to watch the Move It! Shake It! Celebrate It! Dance Party. I’d seen it before and am not really a dance fan. I mean…I love SYTYCD. I just don’t like to see OHAMANDADANCE. The first float finally rolled out into the middle of the Magic Kingdom, the host/DJ said, “IT IS THE MOM’S PANEL IN THE HOUSE! EVERYBODY MAKE SOME NOISE!” And everyone turned to us–including Mickey and all the characters to clap and wave! I WAS A SHOUT OUT IN A DISNEY PARADE! (Seriously? Could I be any more famous?!)

After the parade (did I mention people were videoing us? and taking pics with their cell phones? and coming up to talk to us afterwards? well they were!!) we had to re-play the whole thing so the professional vidoegraphers could get us screaming our heads off. It was quite fun.

This leads us to free time. Free time at Disney World. Let’s all pause and think about that wonderful phrase. Remembering of course that I am alone. Childless. No responsibilities.

It’s fun when you’re at Disney with Disney fans. Everyone says “yes” to any suggestion. There was no discussion or argument. We just like it all. We got to see Tiana’s Showboat Jubilee, had a Dole Whip, rode Big Thunder Mountain and even saw Jim the piano player. Oh, and Marc signed autographs. 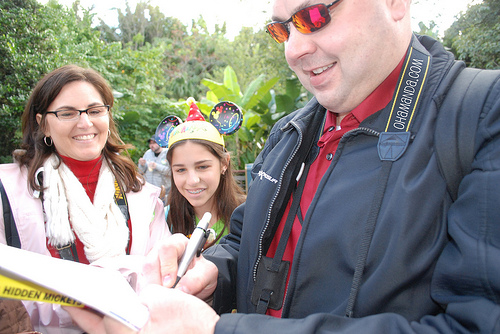 Then it was back to the Contemporary for some freshening up and a big YUMMY dinner at The California Grill with many of the previous Mom’s Panelists. The food and company were so good. Here’s my only twitpic during the meal. 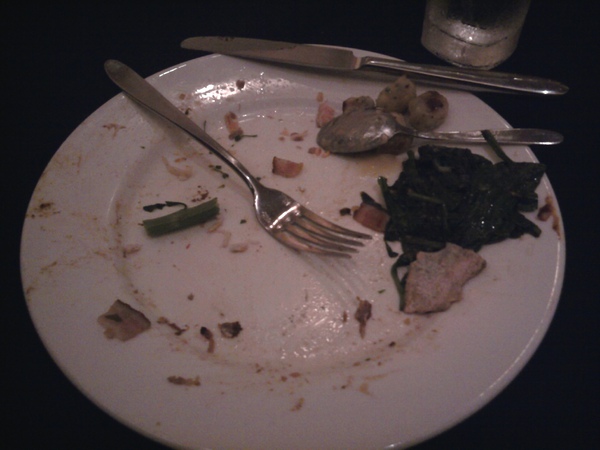 Ahhh. After watching Wishes (the most beautiful fireworks show ever) from the rooftop, I went to bed because the next morning we had to be up before the crack of dawn. Seriously. I set my wake up call for 5:15. FIVE FIFTEEN.

Day 3 should be recapped sometime before 2011. While you wait don’t forget to visit me and my new Disney bffs at DisneyWorldMoms.com! Seriously, GO NOW!!