You are here: Home / Devotions for You / Do not merely listen…

Continuing on our theme of respect, we are learning to respect God’s word!  I have a couple verses we will be sharing about God’s word, and we started with a new memory verse… Do not merely listen to the word.  Do what it says.  James 1:22

I really want to impress on Elias that God’s word is truth, and we need to not only listen to the word (stories, rules, promises, etc), we need to actually do what it says.  I want this to help lay the foundation for respect and obedience to God.

So in the spirit of doing, we did a memory verse activity game – something to get Elias moving and doing…

To prepare, write and cut out 2 sets of the individual words in the Bible verse… we’re doing another matching game, so the different colors for the words help a lot. 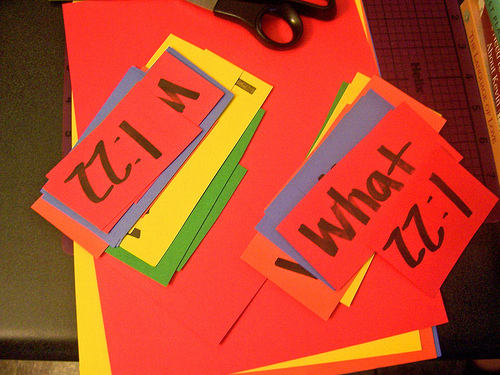 Then we placed one set of words at the far end of our living room, and I sat at the other end and handed Elias the words of the Bible verse in order, having him run to the other end of the room to match up the words and bring them back.  I have a video to illustrate (and some words to say about the video: see note at bottom of post):

Elias had a lot of fun doing this – and despite Donovan’s fussing in the background, he had fun, too – once I made sure he had 2 pieces of paper in his hands, just like Elias.  If you have a chance, double check yourself with the words – I was missing a couple words on the coffee table, so the nice little edit you see in the middle of the video was actually me running to the other end of the room to figure out what I did wrong, tripping over both boys in the process, and generally creating mayhem.  Ehem…

After the activity, we strung the words together to hang our verse up – this is so easy!  I’ll be making banners like this for everything in the future! 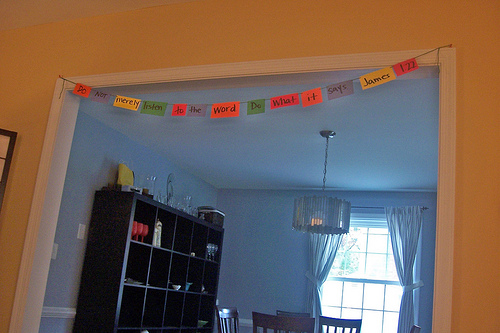 All I did was punch a hole in each top corner of the word and string them on some yarn – WAY too easy!  Not as pretty as some of the bunting that is out there right now, but a quick and fun alternative! 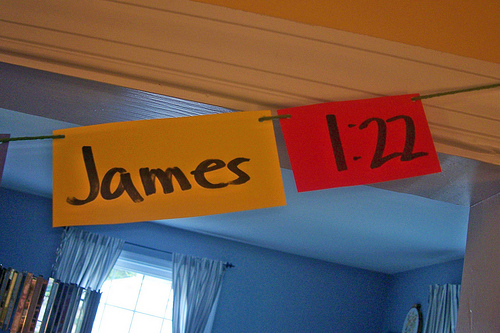 I really like that this is out in the main rooms of our house for everyone to see – I already have it memorized, and it is a constant reminder for me to set a good example for the boys, and really work on obeying God’s word in all I do.

**Note on video – a quick apology for the state of my living room – you get a far away view of my sewing corner… and the coffee table is pushed over to the side like that to prevent the boys from playing with my sewing stuff.  It’s just how our home functions on a daily basis, and it’s not the showcase I’d like it to be… and now I know why Josh thinks I talk too loud.  Man – I am loud!  OK – enough apologizing about the video – I’m just nervous because it’s my first time to post one… and now I’m over it!