I’m thankful for new beginnings… after my struggles last week with the letter D, I was fully ready to move on to the letter E, with all new activities and verses…. 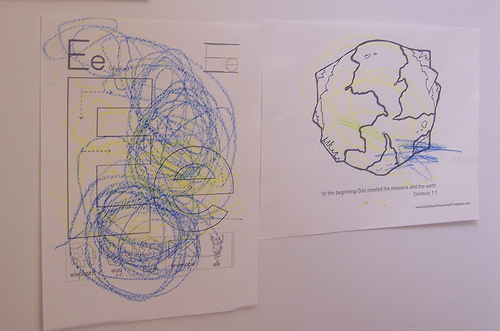 I found a new website that I am having a fun time poking around on… Christian Preschool Printables.  I got the printout of the earth on that site – it also has a wonderful memory verse on it… “In the beginning, God created the heavens and the earth.” (Genesis 1:1).  He’s already memorized this one, and I’m still mentally chewing over how the Bible verse is going to work for us and why I’m the one struggling with it.  I’ll let you know when I have it all figured out.

So, E is for earth, elephant, envelope, egg, and, of course, EJ!  The letter E is one he’s known from the beginning, since he’s seen it in association with his name for such a long time.  One thing that I think is really interesting – because he’s so allergic to eggs, we don’t have them around much, and he’s never seen one cracked open and raw.  So when I showed him a picture of one, he had no idea what it was.

But the earth… we hit the jackpot with this one!  EJ loves space and the things in it as much as he loves dinosaurs and sports. So we’ve done a lot with the earth this week.

I found some paper bowls in my pantry, and I grabbed our blue and green paint.  When I discovered that we were out of cotton balls, I found some little white craft pom-poms… and we made our own earths!

Glue once again reigned supreme – at first, there was not much paint on EJ’s earth – gluing the pom-poms down was the most fun.

Then, when he discovered how to squeeze the paint out of the paintbrush (it’s in the handle of these great little inventions), the pom-poms were gone, and the earth was covered!  He also used the pom-poms to spread and stamp the paint around. 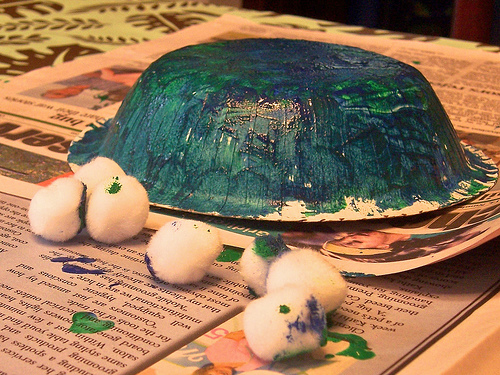 On the right is what I had in mind for the craft, but I love EJ’s interpretation of the earth. 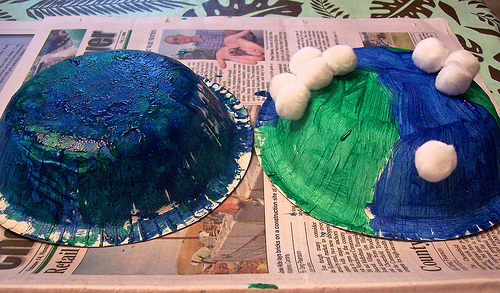 And I loved it when EJ wanted to show his earth to Daddy as soon as he walked in the door.  Beautiful!

I also found other great earth-things online – Look at this!  Isn’t it fun?  Definitely something I’ll save as a reference for years to come…