You are here: Home / me / The People of Nassau

I’m really enjoying my vacation blog. I’m up to day 3, if you’re interested. I think I’m going to like keeping it up. You know, like twice a year. It’s fun because I can put all the minute details in and post lots of pictures I think the average reader might get bored with! But I saved 2 pictures for this post.

This is really the tale of 4 people: a little girl and an old woman, a little boy and an old man.

The boy I met while I was waiting on my sisterchicks to get out of a steamy jewelry shop. (I say steamy because it was…steamy. It felt like a sauna in there!) I was standing on the corner of the street and was looking at a shelf of shot glasses. I picked one up that had the Survivor logo (don’t ya just want one of those!) and a little head popped out of a crate next to me and said, “$2!” I jumped, “What?” I heard him again, “$2!”. So, I turned to see a little boy hiding behind some crates at a store/stand full of souvenirs. We ended up all going into this “store” and talking to this little guy. He was hiding because he was eating lunch–chicken legs. We tried to talk to him but his accent was too thick and ours must have been thicker because none one of us knew what the other said. But what he did know was that these white girls had money to spend. He modeled a little coconut shell turtle that I ended up buying for Lydia. But as I was walking around that crowded store full of strange carvings and dumb tshirts, I got tears in my eyes because this was that little boy’s world.

Later we went to the Straw Market, a giant pavilion packed to the gills with women selling tshirts, fake designer bags and their straw wares (fans, purses, bags and dolls). They wouldn’t even look up and still say, “Pretty lady, how much do you want to spend?” or “Stop here and look at my jewelry! I’ll give you a deal.” I saw one old old lady in a 1970’s purple polyester dress repeating to herself over and over, “Purses $5. Purses $5.” This was her world.

The woman in the purple dress made little impact on me until I met this little girl. 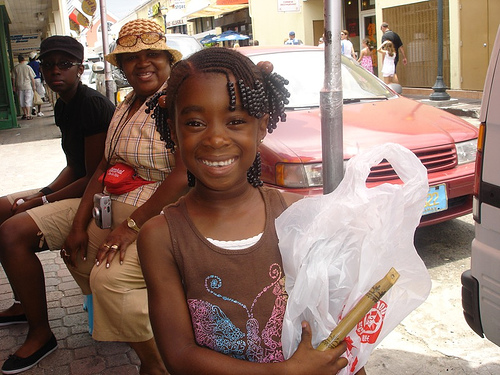 I heard her before I saw her. She was blowing a little tune on her flute and then saying, “Flutes $1. Flutes for a dollar.” I walked by her the first time and thought, “Oh, they’re starting her off early.” But the second time we passed her, the woman in the purple dress popped into my mind. I just saw this little 5 year old girl looking fresh and beautiful today and old and twisted tomorrow. Her world is selling flutes for a dollar to tourists. We bought 3 flutes from her and asked if we could take her picture. But I’m still sad I didn’t ask for her name.

I know her plight isn’t as bad as some. She’s not being bombed or terrorized. She looks like she eats. She’s got cute hair and a nice outfit on. But her world is small. She’s being used for trade. She’s grown up before her time. She’s already having to bear the weight of her family’s needs. This is her world.

The last man I didn’t meet. I just noticed him. He was a painter. 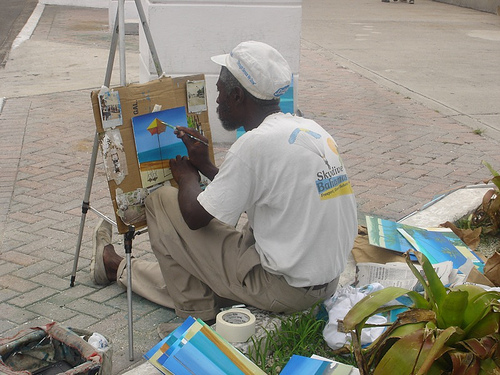 I wonder about him. He’s got a Skydive Bahamas shirt. Is that his real job and he’s having fun now? Or is he sitting there hoping someone will stop and buy his paintings. Look at the pictures he’s taped to his “canvas”. Who are they? What are they of? Inspiration? Family? Nothing? His shoes say a lot about his financial place. Everything about this man and this picture make me wonder. How big is his world?

While we were talking about these people, someone said, “Well, they don’t know any different.” True. This is their life, so who cares? Well, yeah, but I could sense that they were stuck. This was their life. This was the best they would ever be. That little girls’ first and only job will be to sell stuff to people off a boat!

It’s hard to describe the way it made me feel. I want to be articulate, but I can’t do it. And I can tell some people might get the feeling I’m wanting to Americanize or Christianize these ungodly un-modern heathens. That’s not it at all.

I’m the kind of person who wants to do more. I want to see more. I want to know more. The Bible says that God has planned my life. If I choose to follow Him and ask for His direction, I’ll see this big beautiful plan come to life. I don’t want to get stuck in the every day, the things that I’ve always known. I don’t want to get stuck in ME and wake up one day old and twisted never accomplishing more than I have now.

Who knew a cruise could be so enlightening?